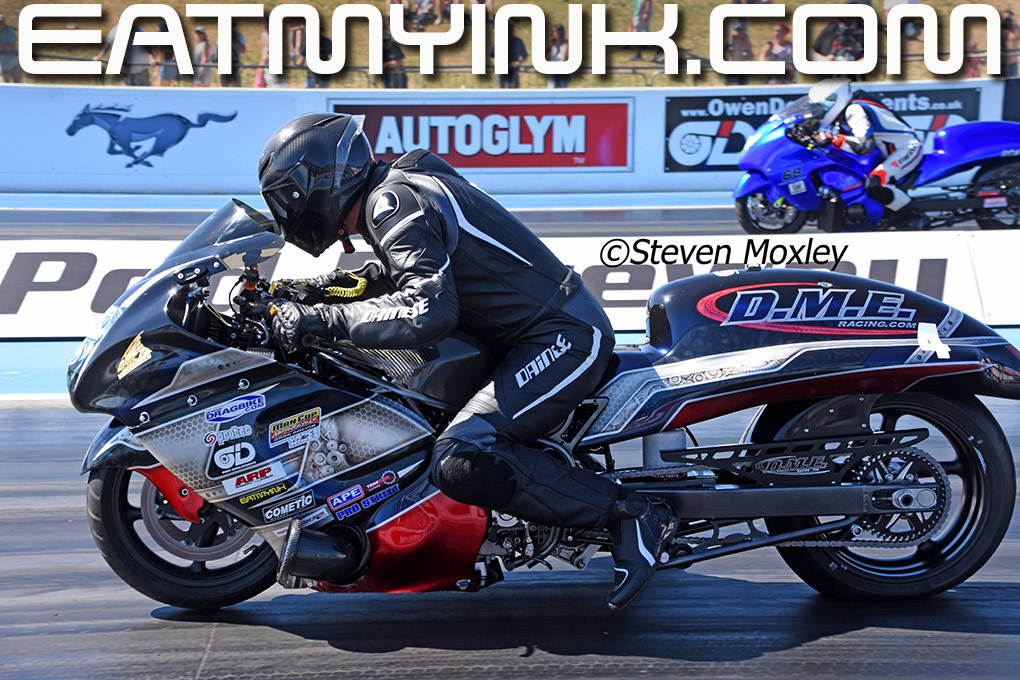 Rain washed out qualifying for the National Finals—round 5 of the 2018 ACU Championships—at Santa Pod Raceway, so it was a one-shot qualifier on raceday for some of the classes.

Reigning Champion Steve Woollatt led the small Top Fuel Bike field with a 6.330 in qualifying, which gave him a bye run to the final. Gert-Jan Laseur was next with a 7.873 and Allan Davies on the bump spot at 8.415.

Lorcan Parnell had already won the 2018 ACU Funny Bike championship, but he didn’t qualify for the National Finals nor did Dave Peters. Both riders had problems on the start line.

Kars van den Belt was the number one qualifier with a 7.055 at 185.88 mph. Phil Crossley was the only other rider to do a full power pass with a 7.848-173.73.  Both Dale Leeks and Thomas Joswig had troubled runs. Dave Buttery had an incident at mid-track and parted company from the bike. Dave was OK.

First semi and Leeks still had problems down track. Crossley took the winlight with a 7.876.

Three riders were within a shout of winning the ACU Comp Bike championship, but it was Rudolfo Maduro riding Charly Anasgasti’s bike who was the number one qualifier with a 7.445-182.14. Those were the best figures ever for the bike and Maduro’s first number one qualifier.

As for the title contenders,  championship points leader Erik Jennes had a chain break and was on the bump spot; Margot Schmidt was fourth with a 7.706 and a p/b speed of 186.65; and Sean Mills was tenth with an 8.508.

Mick Winyard ended Jennes’ title hopes in round two, and Mills and Schmidt met in the final to decide who was going to be the champion.

It was decided on the start line when Mills had a blue line violation and Schmidt became the third female to win the ACU Comp Bike championship, joining Helen Curran and Lizz McCarthy (now Lizz Charman). Schmidt also became the second overseas rider to win ACU Comp Bike Championship (following Klaus Brinkmann in 2002). There were 30 points between Schmidt and Mills—a close championship.

This was to be the last competitive race for Jemma Venables, though she may do the odd race in the future. Jemma didn’t qualify for this event.

Things didn’t start to well in round one of 9.50 Bike eliminations. Points leader David Bowe had an incident and parted company from the bike and was taken to hospital.

The final was between James Cross and Richard Sawatzki.  The race was decided on the start line when Cross redlit and Sawatzki won the event and also won the 2018 9.50 Bike Championship.

Phil Pratt had already sealed the ET Bike Championship coming into this event.

Jasmine Cordelle took out two big names in eliminations—Scott Collier in round one, then Pratt (who redlit) in the next round.

Robinson beat Wayne Nicholson in round one and won the 2018 MSA Pro Modified Championship.

Chris Isaccs met Robinson in the final, but for Robinson it would not be a happy ending. At mid-track Robinson’s car hit the wall and then went into the air and finished up in the other lane. Isaccs was ahead of Robinson and took the win. Robinson got out of the car and went to the ambulance.

Congratulations to the following champions: