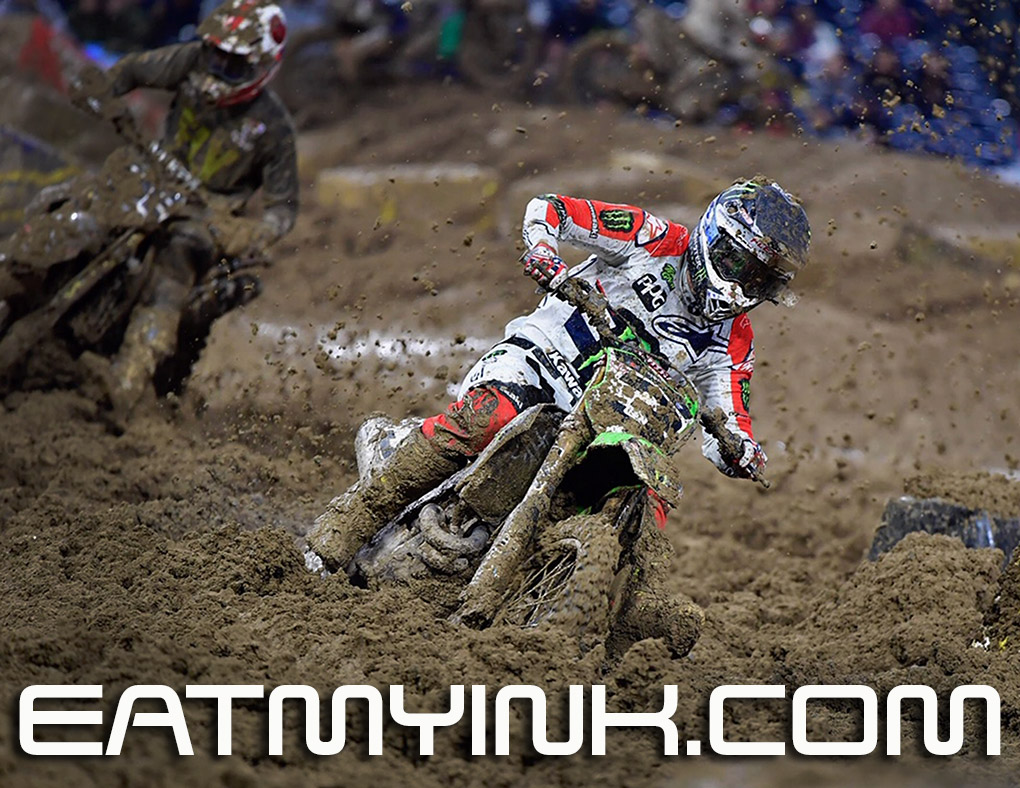 Both a major rainstorm and Monster Energy AMA Supercross hit San Diego this weekend, resulting in the second mud race of the season. The mud caused both championship points leads to change hands at this, the Military Appreciation Night event, as Monster Energy Kawasaki’s Eli Tomac took his first win of the season to put himself atop the 450SX Class points board. Another Kawasaki rider, Monster Energy/Pro Circuit Kawasaki’s Adam Cianciarulo grabbed the Western Regional 250SX Class points lead, this one coming on Cianciarulo’s third win this year.

Supercross is a ‘rain or shine’ event, and the weather hit late afternoon with a downpour that soaked the track. These conditions often produce a surprise winner, but in the 450SX Class they allowed one of the favorites, Eli Tomac, to ride to a confident win in front of the 39,840 fans who watched during clear skies – there was no rain once the evening racing was underway, causing the mud to tack up and stick to riders and machines.

It was Team Honda HRC’s Ken Roczen who jumped out with the holeshot, but within a couple corners a bobble allowed Tomac by. In the early laps Team Rocky Mountain ATV/MC KTM WPS’ Justin Bogle kept the number three bike in sight but never closed enough to threaten it.

Monster Energy Yamaha Factory Racing’s Justin Barcia’s high-revving style seemed to have gotten the best of his bike and it stopped atop one of the tricky, rutted jumps. JGRMX/Yoshimura/Suzuki’s Chad Reed, who’s won the San Diego Supercross six times, was off to a sixth place start and looking strong in the mud. After a mid-pack start Red Bull KTM’s Marvin Musquin was picking off riders quickly. Then on the downside of a small jump out of a corner Red Bull KTM’s Cooper Webb went over the bars; he was back to ninth when he got his bike back up and going again. Over the closing laps of the race Roczen got past Bogle for second. But the man on the move was Musquin, who got past Roczen just one corner before the checkered flag. Crowd favorite Chad Reed finished the race fifth, marking his 159thcareer top five.

“Man, what can I say? Today was just insane with the weather conditions and the sloppy mud,” Tomac said after the race, which was shortened to 15 minutes plus one lap due to the conditions. “I had a really comfortable lead…for a lot of the race and then got hung up on a Tuff Block after the whoops. [I] had to stop, pull it off, and then, yeah, a couple guys [were] down the last couple of laps there so that was crazy.

“For me, today was one of those days where I just felt on all day long. I had a few hectic moments, but we survived the mud, got our job done, and now we are leaving with the red plate which feels good. I am looking forward to racing back underneath a dome next week on a dry track in Minneapolis.

Marvin Musquin’s second place finish moved him from fourth in the points into a tie for second. “I didn’t get a great start, and man my helmet got so heavy with all the mud. It was getting so sticky. I think I did the last lap with my eyes closed. My goggles were full of mud. I tried to scrape it and then luckily the roll-off was working after that. And then I just tried to make passes and try to be consistent, not crash, and stay on two wheels. That’s what I did. And toward the end I started looking at Frankie [Latham, his mechanic] and he showed me five laps to go but I had no idea where I was in position. So, I just tried to make passes… and I passed Bogle and then I passed Kenny on the very last lap. And then I heard the fire for the winner and I’m like, ‘Dude, I’m right behind!’ So second place is awesome tonight. I mean, being on the podium tonight is a great result and man those conditions were so tough. Anyway, we got it done, I’m glad it’s over.”

After the race, Roczen was both upset that he dropped a position at the end, but happy to get through a major mud race tied for second in the points. “I got a perfect start, I really jumped out of the gate, hooked up great. Almost went down in the first turn actually it was really slippery. I threw it away in the second turn over there which I couldn’t believe it because this could have been it, having a clear track there for a little bit could have really helped… I kinda went back to fourth or fifth or something and my helmet got super heavy with all the mud; since it didn’t rain any more it got tacky mud on there. And I got passed literally on the last straightaway here. It was just a big mess out there with lappers and these crazy conditions. I’m not happy that I got passed there and went from second to third, but on this kind of night, it can be very, very hurtful for you for the championship so we’re only four points behind and it’s all good.”

In the Western Regional 250SX Class, which was shortened to ten minutes plus one lap, the Monster Energy/Pro Circuit Kawasaki team took the first two spots, a feat the team hasn’t accomplished since Las Vegas in 2017 (they did it three times that year). Adam Cianciarulo rode a nearly mistake-free race and lead from the exit of the first corner until the finish, earning enough points to put him into the championship lead. His Monster Energy/Pro Circuit Kawasaki teammate Garrett Marchbanks got his podium position the hard way – battling his way past the riders ahead of him. It was a tough night for the points leader heading into the night, Monster Energy/Star Racing/Yamaha’s Colt Nichols, who finished a disappointing tenth, while his teammate Dylan Ferrandis also had a frustrating night with a last lap bike failure that caused him to drop from sixth to seventh at the checkered flag.

“What a night!” said Cianciarulo. “It has been an up and down first couple weeks of racing for me, but to get the win tonight is huge. This feels so good because the mud brings in added stress and you never know what will happen. To get a start – my team made a great call going to a Dunlop paddle tire, a scoop tire, instead of a regular tire that we run here, and it really helped me on the start. That was the whole race. After that I just tried to manage the bike the best I could.”

Cianciarulo has stated he’s trying to race without some of the big mistakes that have plagued him in the past. When asked after the race how he rode so well in such tough conditions he said, “I think it started earlier in the week, if I’m honest. I think all my best races, all my wins, have come when I’ve – I’ve almost seen it before it happens in the sense that I like to visualize me doing well. And for some reason this week it just came easy. I visualized before I took off the gate right there… I visualized myself coming into the first corner first and the race going perfect, and it’s like it played out exactly how it went in my head.

“Man, these ones feel so good because it’s so stressful, you never know what can happen in a mud race, [with] a lot of elements and a lot of stuff out of your control. But man I’ve never won two in a row before so that feels good going into this little break with the points lead and the red background plate, although I can’t wait to see it on my KX™250.

“I also want to give a shout out to my teammate Garrett Marchbanks on his first ever podium. It was awesome to have the Monster Energy/Pro Circuit/Kawasaki team go 1-2 tonight.”

It was the first Monster Energy Supercross podium for rookie Marchbanks, who showed his speed early with a third in the only timed qualifying practice. After finishing 17th in his heat, Marchbanks was forced to go to his first LCQ where he took the win. The extra track time seemed to help keep Marchbanks comfortable and confident for the main event. He started in the top five and kept pushing toward the front, moving into second at the halfway mark. When the checkered flag flew, the rookie was second but was unaware of taking his first career podium finish amidst the muddy chaos.

“Tonight is a night I will never forget,” said Marchbanks. “I felt good all day as I qualified in third place and I got a good jump in my heat race, but then another rider took me out off the start and I wasn’t able to recover. In the LCQ, I knew I needed to just get out front, which I did. I didn’t have the best gate pick so I knew I just needed to send it off the start. By Lap 2 I couldn’t see out of my goggles and just ditched them, and once I was able to see I was able to make some passes. I didn’t know what place I took until the checkers flew, but I just kept pushing the whole time and kept passing people every lap until the end. Maybe not knowing took the pressure off me, but I love this feeling and repaying the team for all their hard work. I can’t thank my whole team enough, it feels so good to put my Monster Energy/Pro Circuit/Kawasaki up on the podium! I would love to see it happen again this year.”

Rounding out the podium was JGRMX Yoshimura Suzuki’s Jimmy Decotis. “I worked really hard that whole moto and it was so sloppy and [with] my little legs I was struggling, so I’m really thankful that the Suzuki’s so good, it takes so much pressure off me and allows me to just ride like I can. I’m never tweaking with the bike, I’m never playing around with things, I’m just confident in my bike, so I’m super happy. I’m thankful for JGRMX. These guys work so hard for us and I want to get more of these when its dry and show the world I can do this.”

story, photos and video courtesy of Supercross and team reports