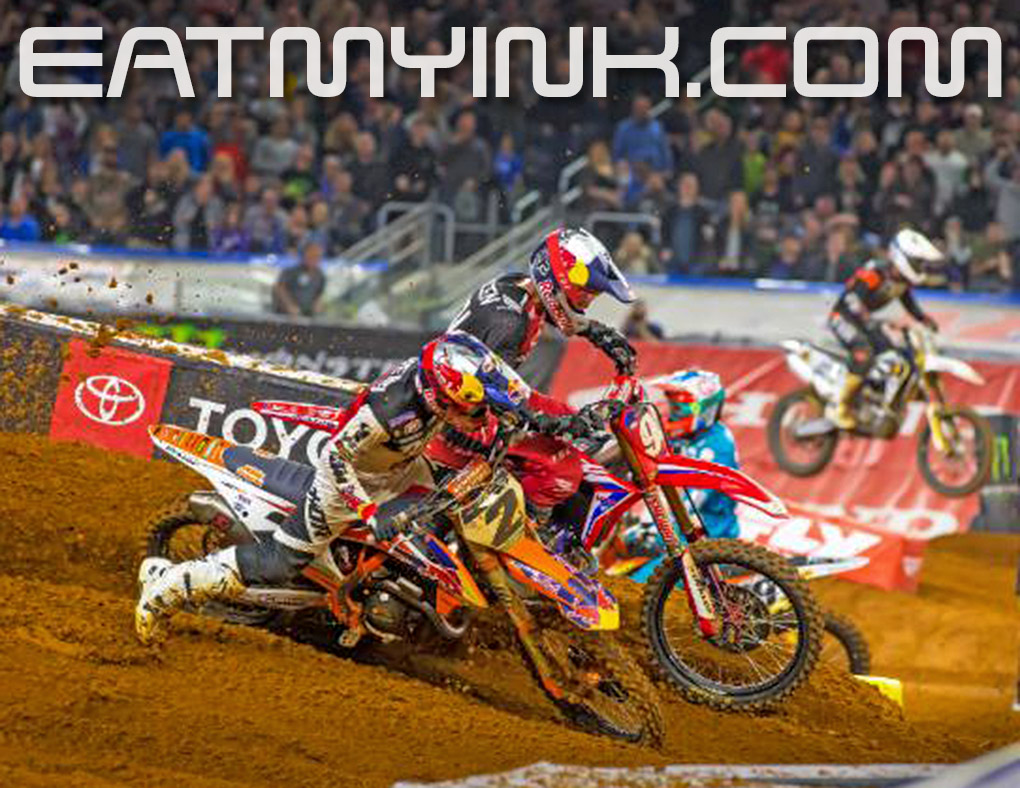 Round seven of the Monster Energy AMA Supercross will go down as the closest 450SX Class finish in history after an inspired ride by Red Bull KTM’s Cooper Webb. The early laps appeared to be the return of the 2019 pre-season favorites, but Webb charged from seventh to take the lead in the final corner in an aggressive squeeze at the top of the final berm to nab the win, and simultaneously the points lead, from Team Honda HRC’s Ken Roczen. In the second round of the Eastern Regional 250SX Class, Austin Forkner repeated his win at the previous round to take an eight-point lead in that class.

When the gate dropped on the 450SX Class Main Event it was Ken Roczen and Monster Energy Kawasaki’s Eli Tomac nearly side by side, with Roczen edging out Tomac for the holeshot. Within three corners Tomac was in the lead and Red Bull KTM’s Marvin Musquin had jumped into second. With Webb back in seventh it looked like this would mark the return of the old guard; before the first lap was over Roczen had re-taken second place and the three looked sure to fill the podium, only the order was in question.

A little over three minutes into the race Roczen overtook Tomac and found his flow. Two minutes later Tomac lost the front end in a rutted turn and picked himself up in seventh. From there he dropped slowly back, finally finishing in twelfth. Just past the halfway mark Webb made it around Team Rocky Mountain ATV/MC KTM WPS’ Blake Baggett and set his sights on his teammate Musquin, who had closed the gap to Roczen to under two seconds. Webb could now see the win 3.6 seconds ahead. He got past his teammate in the whoops with under four minutes on the clock and began to reel in Roczen; Webb had some better lines including quadding a section that Roczen was tripling.

Webb nearly pulled the trigger heading up to the white flag but saved his blitz through the whoops until the final lap, where he then cut across the bottom of the final berm and rode Roczen aggressively high. Both riders came out of the turn off balance and wide open. Webb won the drag race to the finish line an incredible .02 seconds ahead. What would have been points leader Roczen’s first win of the season instead turned into Webb’s fourth – the only rider with multiple wins after seven rounds – and Webb’s re-taking of the points lead. The Texas crowd of 57,614 went wild for the North Carolina star who has emerged as the man to beat in his third season in the 450SX Class.

Webb was fired up on the podium, “That was just insanity, it really was. I don’t know, it was just clickin’ I guess. I got a bad start, I don’t know where I was the first lap, but just tried to make passes. I was behind Baggett for a while, he was riding really good and he got me to get the whoops a lot better, and then I got around Joey [Savatgy] and him. And I honestly was kinda settling for a podium and I just said, ‘You know what, never give up.’ I would have probably got yelled at by Aldon [Baker, his trainer] for settling. So just went out and gave it my all. And I knew that last lap he was doing the jumping line [through the whoops, so] I needed to skim. He saw me coming, I think, at the end and just picked it up. But dude, what, I mean daggone, I mean, that was historical for sure. It was so close, and I just want to give it up to the whole team. They resurged me this year… That’ll go in the record books and I’m stoked. Daggone, that was sweet.”

Roczen came within a single corner of his first win of the season, “I struggled in that rut before and even in the whoops, just did a lot of side to side there. I couldn’t really get a rhythm down. I felt all right on the rest of the track, but it was one of those things where I messed up the turn multiple times, even the lap before. I kept losing time and got squirrely in the whoops and he ran it in there – and it’s all good, I would have done the same thing, it was for the final pass. Out of the turn I couldn’t really get on the throttle very hard because I was super close to the Tuff Blox and it was soft right there, so I did what I could and sure enough the win was right there, but I just didn’t grab it.” Roczen was down, but not discouraged, “I’ve just been putting in a lot of work during the week, just been suffering and suffering, just to get better. And yeah, we lost the red plate, but it was a good battle tonight; I had good aggression and it is what it is, I’m using it as fuel for the next race.”

Musquin was feeling good to finish a rough day with a podium finish, “I don’t know what was going on in the heat race. I got a bad start, and it was a tough track, and to get seventh place in the heat race is not acceptable. Got better in the main, obviously. Had a good rhythm going behind Kenny and when Eli went down I was running second. [I] started to tighten up a little bit when Cooper was behind and [I] started making mistakes and then he got me and from that I salvaged third place. So, it’s some good points, but it’s not fun to get beat like that. Still trying to get to 100% physically, I’m not quite there yet, but no excuses, those guys rode really well, and the conditions were tough. Like I said, salvage a third place, just keep on moving forward, and looking to next weekend again, and put more work during the week and be better next weekend.”

A different kind of history was made in the Eastern Regional 250SX Class as Austin Forkner became the first 250SX rider in over a decade to pull together two back-to-back perfect nights by setting the fastest qualifying time, winning his heat, and winning the Main Event. It wasn’t as graceful as it sounds, as Forkner had a big crash and a close call in practice and looked ragged during his Heat race win. But when the points were on the line Forkner rode like a veteran while his competitors made mistakes to drop them out of contention for the win, handing Forkner a dominating Main Event win ahead of Monster Energy/Star Racing/Yamaha’s Justin Cooper and GEICO Honda’s Chase Sexton.

Forkner was critical of his ride on the podium, “The tough thing for me after the Heat race was I really needed to focus on riding my lines and not taking a look back, and I still looked back sometimes in that race, which something that I really need to work on is focusing ahead, not worrying about anybody behind me. But it was tough, I was so focused on what I needed to fix from my Heat race that, it’s stupid to think, but the first five minutes I didn’t really breathe; I didn’t do well with my breathing and I got winded. I got winded after about five minutes or half way, and then those guys kinda started to reel me in a little bit. And I was like, ‘Well, I can do one of two things. I can either push over my limits and take a chance on making a mistake with being a little bit winded, or I could just try to smooth out, try to catch my breath, recover.” All in all, for as not super pumped about that race as I am, I mean, I still won. And points are points, I’ll take it; if that was a not so good of a Main Event for me I’m definitely going to take it.”

Justin Cooper improved on his third-place last weekend “It’s unbelievable coming off a pretty disastrous season last year in Supercross, [I] got hurt really quick, bummer had to sit it all out [and] wait for outdoors. So, it’s just a blessing to be up here. Especially two in a row now, just kept the momentum going like I wanted to and just moved up one more spot on the podium, so really happy. Felt good all day, again, and just I feel like I’m in a good spot. I’m riding smart and I’m just letting the race come to me. The track was really tough tonight and you had to keep your focus the whole time because those ruts were getting deeper each lap and it could catch you off guard.”

Forkner’s teammate Martin Davalos was eager to get back on the track after a weekend that left him with a result that didn’t showcase his true speed. He quickly put in the work, qualifying third overall in timed practice. The same speed worked well in his heat, where he finished third.

The main event put Davalos up near the front at the start of the 15 minutes plus 1 lap race, coming around the first lap in seventh. He chipped away lap by lap to eventually make his way up to fifth. His solid race result pushed him into the top-10 in the championship standings.

“This race was one I wanted to get through healthy and I was able to do that,” said Davalos. “It was great to show that I’m capable of being up with the front runners and bounce back. I would love to get a better start next weekend and really contend for a podium spot.”

In an unpredictable season with some of the best racing the sport has ever seen, it’s sure to be another great night when Monster Energy Supercross drops the gate again next Saturday at Ford Field in Detroit, Michigan.