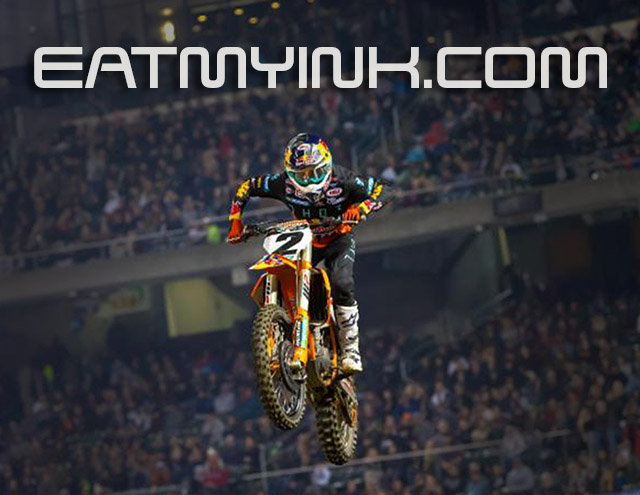 In an exciting Monster Energy AMA Supercross race, during a season that’s seen none of the pre-season favorites yet take a victory, Red Bull KTM’s Cooper Webb becomes the first rider to repeat a win, this time at the Oakland-Alameda County Coliseum on a night that provided clear skies and a nail biting finish in front of 47,024 fans. Webb squeaked out the win less than a second ahead of teammate Marvin Musquin, and in doing so became only the 11th rider in Monster Energy Supercross history to back up a first 450SX Class win with another win. KTM rounded out the podium with third place going to Team Rocky Mountain ATV/MC KTM WPS’ Blake Baggett. The 250SX Class also saw the year’s first repeat winner, with Monster Energy/Pro Circuit Kawasaki’s Adam Cianciarulo taking his second win, matching his performance from two weeks ago.

From the drop of the gate in the 450SX Class Main Event it was Cooper Webb out front. He went on to lead every lap like he’d done it before, yet it was only his second win in the premier class. Team Rocky Mountain ATV/MC KTM WPS’ Justin Bogle was right behind, but Musquin was almost immediately past Bogle and taking up the challenge with his teammate Webb. Monster Energy Yamaha Factory Racing’s rookie Aaron Plessinger held off fellow rookie Monster Energy Kawasaki’s Joey Savatgy for fourth place while Team Honda HRC’s Ken Roczen set his sights on both riders. Hungry for his first win in 2019 to hopefully jump start another of his legendary win streaks, Monster Energy Kawasaki’s Eli Tomac circled mid pack for the first lap.

Musquin wasted no time pressing to get into position to pass to get his first win of 2019, but he could not close within striking distance of his teammate. After five minutes of racing the two were separated by just over one second; that’s when Musquin made a push. He dropped the gap to .7 seconds while behind them Roczen and Tomac were each on a steady climb through the pack.

At about the mid-point of the 20 minute plus one lap race, Musquin went down. As he remounted the battle between Savatgy, Roczen, and Tomac caught him. Musquin lost two positions to the group. Then Savatgy had what appeared to be a mechanical issue that took him out of the race. Musquin found his pace and passed back into second and set his sights on Webb. When the race clock reached zero and there was only one lap remaining, Musquin was over 2.5 seconds behind. He charged to within .7 seconds, but Webb remained composed and smooth and held the lead to take his second 450SX Class Main Event win of his career.
“I almost can’t believe it. I mean, I was good today, but I wasn’t anything like last weekend. It just shows, you never give up, you put your head down, and I definitely got a gift from Marv, his crashing, and he caught me at the end. I was so nervous. I don’t know why no one told me the second one’s harder than the first. But man, it’s honestly insane. Back to back, I guess I got the red plate… It’s pretty frickin’ awesome… I feel like everything, these last two years not being worth a crap, and to get back on top is awesome.” Cooper said after the race, referring to his two previous years in the 450SX Class.
About his mid race crash, Musquin said, “I think I relaxed too much. It was intense. Physically it’s tough out there, I’m definitely getting better [from a pre-season knee injury]. I was able to ride all week. I’m getting better and better but that was tough. That track was definitely difficult for everyone and especially those whoops, but I figured it out in the Main and I was able to pass some guys and, yeah, it’s frustrating. I rode really well and I’m really happy. I mean, it could have been mine, you know, tonight, but it happens. So, no excuses. I went down, but I was the fastest, to be able to pass Tomac back, and Roczen, I don’t know if Roczen had an issue in the whoops or something, but I was able to get through them easier and I was more consistent too. Baggett was behind me and pretty fast, too, but I’m a little bit bummed. Finishing a little bit behind Cooper is not fun but I’m making progress. Second place is good, it’s a lot of points, but I want to win for sure”
In response to reaching the podium after a 17th place start, Baggett said, “Yeah it was not a good start. I got wheel spin right outside the gate, just didn’t execute it right. But it is what it is, I fought my way through. I was feeling great in the middle of the race and just ran out a little in the end, just kind of lost my mojo.”
The 250SX Class Main Event also had a winner who held the lead from the beginning, also had plenty of action and challenges for the lead and awarded the win to the first repeat winner of the year. This time it was Cianciarulo setting the lead pace while it was Monster Energy/Star Racing/Yamaha’s Colt Nichols, TLD/Red Bull KTM’s Shane McElrath, and Monster Energy/Star Racing/Yamaha’s Dylan Ferrandis who put on the charges. Cianciarulo, who has been working on smoothing out his riding and not getting ahead of himself while in the heat of battle, looked to be pushing a little too hard in the early laps, causing a few bobbles that kept his pursuers close. He soon smoothed out and got a cushion to ride more relaxed. Meanwhile, Ferrandis was charging hard from 11th place and late in the race made contact with his teammate Nichols for the pass into second. Ferrandis got the lead down to under a second on Cianciarulo, but a mistake that forced him to double jump a triple gave Cianciarulo enough of a gap to bring home the win without too much pressure at the checkered flag.

Cianciarulo admitted to the NBC Sports cameras he was exhausted after the race. “I’m so proud of myself today. My team, myself. People know me, and they know I’m good in those harder [packed dirt] tracks but notoriously I’ve struggled when it comes to ruts. Man, it was not pretty. I was all over the place in the whoops, hopefully you guys didn’t get too many shots of me going through there. The track was physically tough, physically demanding, and these guys were breathing down my neck the whole time.” He admitted to his fans and the broadcast announcers that he’s working on calming down and smoothing out.

“The track was so demanding and kept your heart rate up the whole time. There wasn’t any place to get a break and that whoops section kept deteriorating. To come out on top of this one makes me feel really good – proud of myself and my team. We have one more before the break and I want to make it count. We gotta keep it up, gotta keep it consistent, smart. I know guys, I know I’ve got to calm down a little bit, so we’ll try to bring this momentum into San Diego.”
Ferrandis is ready for a win this season and he was disappointed to come from so far back in the pack and get so close to that first win of 2019 yet not manage to make the final pass. The Frenchman said, referencing a mid-week practice track crash, “It’s a little frustrating to finish second again but I mean, I did a good race… I’m happy I came back from behind. I passed some of my main rivals and gained points on the leadership [board], so that’s important. But [I had] some issues early this week, so I wasn’t sure I could race tonight but I felt good and strong and next weekend in San Diego we’ll see.”

Colt Nichols, the points leader since round one, held onto that championship lead with a third- place finish, duplicating his finish from the previous round, “It’s always tough. Once you win you get that taste of victory and that’s all you want. But overall, I can’t complain. I’m on the podium again, I just felt like I kind of let it slip away in that Main Event. I was pressuring Adam really good and then a few of my own little mistakes and Dylan was able to catch me and pass me. Hats off to these two guys, this track was very, very demanding and a very high heart rate track. It was tough and I just kind of fell off a little bit, and that’s on me.”
Monster Energy Supercross travels south next weekend for its final stop in California for this season at round five at Petco Park in San Diego.