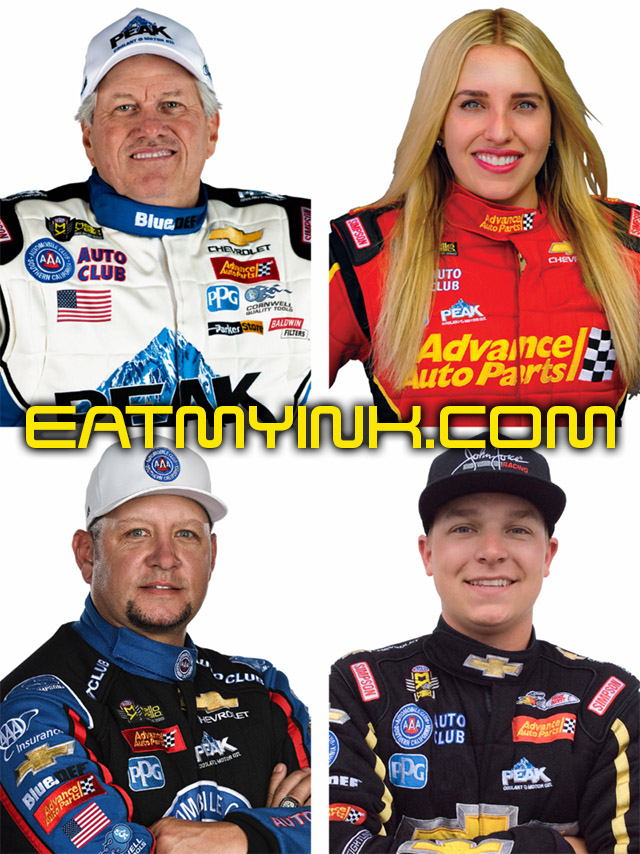 It was announced today that John Force Racing will feature three full-time hot rods with a fourth team in contingency for the 2019 NHRA Mello Yello Drag Racing Season.
President of John Force Racing and two-time world champion Robert Hight will continue to drive the Auto Club of Southern California Chevrolet Camaro SS with his tandem of Jimmy Prock as crew chief and Chris Cunningham as assistant. The trio picked up a world title in 2017 and in 2018 won four races in seven final rounds on their way to finishing second in the points standings, showing that they have the consistency needed to be in contention for the 2019 crown.

Brian Corradi, who joined the John Force Racing family at the beginning of the 2018 season, and Danny Hood are taking their expertise over to the PEAK Coolant and Motor Oil Chevrolet Camaro SS driven by team owner and 16-time world champion, John Force. Force finished a roller coaster 2018 season with a win at the Mile-High Nationals in Denver and his 34th Top 10 points finish. Corradi and Hood tuned Courtney Force to four victories and 11 No. 1 qualifiers for her career-best season in 2018. The team will be chasing a monumental 150th race win for Force, who is already the winningest driver in NHRA history.
“Working with Brian Corradi and son-in-law Dan Hood is exciting for me. They, along with Tim Fabrisi, have put a strong team together as proven last year with Courtney making a run for the championship. Even with all the day to day operations of John Force Racing, I’m committed to giving 100 percent. I know what it takes to win a championship and its 100 percent focus. I’m committed to giving that to my new team.”

John Force Racing is proud to announce the addition of David Grubnic as the crew chief of 2017 Top Fuel world champion Brittany Force’s Advance Auto Parts dragster. Force wrapped up 2018 fifth in the points standings after opening the season with a wreck that destroyed her dragster. She went on to win the SpringNationals in Houston and secured No. 1 qualifiers at the Four-Wide Nationals in Charlotte, N.C. during the spring and the Carolina Nationals in the fall. Grubnic began his career in NHRA Championship Drag Racing as a Top Fuel pilot where he earned three event victories, ten No. 1 qualifiers and finished as high as fourth in the points standings. He made the switch from driver to world class tuner in 2015 and developed a winning combination that landed him a third-place finish as a tuner in 2018.
“I’m really excited about joining John Force Racing. Everyone wants the chance to get to tune for a legendary team and I’m grateful for the opportunity,” Grubnic said. “I’m sure there will be a bit of a learning curve for this new Advance Auto Parts team but Brittany is a championship driver and this team is ready to put in the work to go rounds, get wins and chase another championship for JFR. It will be a fun year but it will also take a lot of hard work and dedication. I’m looking forward to getting to the race track and fine tuning what we’ve been putting together in the off-season.”

In addition to their full-time line-up, next generation driver Austin Prock will continue the developmental process with full intentions of competing in the 2019 season. “My operation fully functions with a four-car team, with the chassis shop, machine shop and engine program, it makes it all make sense,” said John Force. “We will find a partnership to run this fourth car. Chasing sponsorships is no different than chasing a championship, you work on it 24/7.”
Prock earned his Fuel Funny Car license in 2018 and will be getting his Top Fuel dragster license as well. John Force Racing hasn’t committed to which direction Prock will go, Top Fuel or Funny Car, and will be building his team through the start of the year. Helping in his growth as a driver are crew chiefs Jon Schaffer and Ronnie Thompson.

“The 2019 season is going to be an exciting one for John Force Racing,” said President Robert Hight. “We have some new faces in the pits, some new sponsors, but the same drive and determination that we’ve always had. We’re going after race wins and championships and we have the right people, partners and parts to make that happen. It’s been a long off-season and we’re ready to go racing.”
John Force Racing will be getting the chance to hit the loud pedal for the first time since November at pre-season testing at Wild Horse Pass Motorsports Park in Chandler, Ariz., Jan. 30th-Feb. 2nd. The 2019 NHRA Mello Yello Drag Racing season kicks-off with the Lucas Oil NHRA Winternationals Feb. 8-10th at Auto Club Raceway at Pomona in Pomona, Calif.
story and photo courtesy of JFR