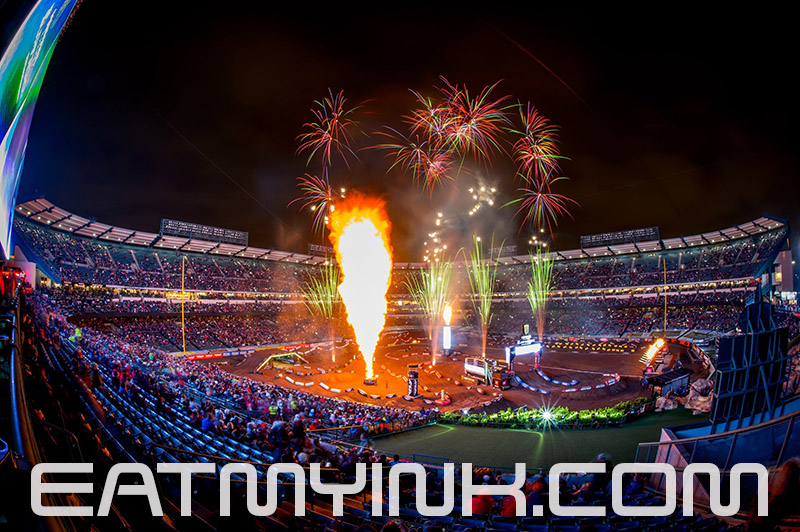 After months of build-up to the Monster Energy AMA Supercross in Anaheim, not even a rare California rain storm could force the thousands of racing fans in attendance to miss the action of opening night. Those fans were rewarded with a historic night on January 5 inside Angel Stadium, as Yamaha swept both classes for the first time since 2008.

When the gate dropped to start the Main Event, Justin Barcia rounded the first turn just inside the top-five while DW15/Rockstar/AGL/Ignite Husqvarna’s Dean Wilson held the lead over Smartop/Motoconcepts/Bullfrog Spas Honda’s Malcolm Stewart and defending Supercross champion Jason Anderson (Rockstar Energy Husqvarna). Barcia made an aggressive pass on Anderson to take over third a couple of laps into the race, then waited patiently behind Wilson and Stewart until Stewart went down just past the halfway point. Seizing his opportunity, Barcia immediately applied pressure to Wilson before making the pass and setting sail for his first 450SX-Class Main-Event victory since the Seattle Supercross in 2013, and the first win for Yamaha in the class since 2012; 93 races ago.

“I’m really proud of myself for being so calm and collected,” Barcia said. “In the beginning of the race, I really wanted to get in the lead fast, but I’ve kind of grown up a little bit. I was a smarter rider that race and that’s what got me that win. All in all, rode just a smart, smooth race. My whole Monster Energy Factory Yamaha Team did a great job today. The prep up to this, even last year being a fill-in guy, to winning A1, it’s incredible. I’m really stoked and just proud of my whole team, my family, my friends, my wife and everyone that’s been behind me and supported me.”

Wilson struggled with his goggles in the closing laps and had to toss them aside in the mud and ended up fourth. Team Honda HRC’s Ken Roczen passed Wilson for second with a few laps left, and then Wilson succumbed to the pressure of Monster Energy Kawasaki’s Eli Tomac on the final lap. Roczen was second and Tomac was third.

“There were tricky track conditions due to the unusual amount of rain for Anaheim, but I managed to stay in good enough condition to keep jumping most of the lanes and pushing forward,” said Tomac. “I remained patient and controlled my pace throughout the Main Event, and although we’re always shooting for the top spot, I’m happy to kick off the season on the podium. The team and I are already looking forward to Glendale, let’s get this season rolling!””All in all, this is like a win to me,” Roczen said. “I mean, my first race back after my injury and got a 2nd here. I had to make a couple passes happen, but yeah, this is good to get out of here on the podium. We’re in a solid spot, because for these kind of conditions a lot can go wrong.”

Tomac led the Anaheim Opener in 2018 before crashing out of the lead and ending the night with a DNF. Third in the mud is a vast improvement. “First round, there’s always the nerves and just the hype from the race, so it was like a double whammy there [combined with the mud],” Tomac said. “I didn’t get the greatest of starts there, but just kind of relaxed, kept my vision clear and was able to make the moves.”

Joey Savatgy proved to be a contender in his 450SX debut after qualifying directly through his heat race. Savatgy was caught up in a first turn crash but continued to fight for a 16th overall finish. “I’ve been working so hard this off-season and feel really comfortable on the bike, but the weather made quite the challenge for us,” said Savatgy. “I had a tip over on the bike and some issues with my goggles in the rain, but I remained focused on finishing the race to my best ability. We have a long season ahead of us, I’m looking forward to getting back on the bike and continuing to grow and improve.”

In the Western Regional 250SX Class, reigning champ Aaron Plessinger graduated up to the premier division for 2019, so there was a definite sense of urgency as the field jockeyed to see who would succeed him atop the division. At least at the opener, the successor was Plessinger’s former teammate, Monster Energy/Yamalube/Star/Yamaha Racing’s Colt Nichols. Nichols led every lap of the 250SX-Class Main Event on his way to his first-career victory.

“This is a really, really big moment for me,” Nichols said. “I finally came into this season healthy. The last two years I’ve had big off-season injuries and it’s kind of been killing me… Looks like it’s going to be a dogfight between all of us and I can’t wait.”

Nichols’ teammate Dylan Ferrandis came through for second place after passing TLD/Red Bull KTM’s Shane McElrath in the final few laps to take over the runner-up spot. “I had a rough day,” Frenchman Ferrandis said. “I crashed in practice, I had some issues with the bike in the heat race, and also a crash at the start, so to finish 2nd tonight is really good.”

McElrath, who won this event the past two seasons, ended up third on the night.”I mean, this is A1,” McElrath said. “All the pressure is here. I was really nervous and everybody, they’re like, ‘Man, you’ve got to make it 3 in a row.’ And it’s like, you bet I wantto do that, but to finish up here on the podium… We’ll take a 3rd.”

The Monster Energy/Pro Circuit/Kawasaki team of Adam Cianciarulo and Garrett Marchbanks came out charging in the sloppy conditions. Despite the unusual rain showers, the veteran of the team Cianciarulo looked calm, cool, and collected all day long. Meanwhile, the rookie Marchbanks made his Supercross debut.

Cianciarulo kickstarted the day by capturing the fastest lap time in qualifying, giving him the first gate pick in the heat race. Cianciarulo followed up that performance by going out and winning his first heat race of the season, which would once again give him the best gate pick coming into the Main Event. In the Main Event, Cianciarulo was off to a top-five start and began to mount an attack on the riders in front of him. Unfortunately, after he passed into fourth place the battle continued and he went down. Cianciarulo would remount and finish in fifth place on the night.

“For me, there are a lot of positives to take away from today’s race,” said Cianciarulo. “The day started out great as we were able to secure the fastest qualifying time in practice, which gave us first gate pick to start the evening races. In my heat race, I got a little squirrelly off the start but I was able to save it and charge to the front and get my first heat race win of the year, which was awesome. The main event is a tough one to swallow because I know I should have been on the podium. It is unfortunate that I came together with another rider, however, I am happy I was able to remount and safely walk away from Anaheim 1 with some decent points. I am already looking forward to next weekend in Glendale.”

The No. 61 of Marchbanks started out his 250SX debut by qualifying in 11th place position. He then entered the second 250SX heat race of the night where he got his feet wet and raced to a sixth-place finish. Marchbanks was able to get a solid start in the main event which allowed him to follow some of the lines of his veteran teammate, and would ultimately finish in sixth place overall.

“Coming into my first ever supercross race I was both excited and nervous as I did not know where I would fit into the picture compared to all the other racers,” said Marchbanks. “To finish 6th overall in my first supercross race in the mud is something that gives me a great building point to move from the rest of the season. I know I have the speed to be in top five each week and contest for podiums. I am really excited about getting back on the bike this week to work on a few things and improve on this result next week in Glendale.”

Barcia and Nichols will both be sporting red numberplate backgrounds on their Yamaha motorcycles for leading their respective championships as the series heads to round two at State Farm Stadium in Glendale, Arizona, this coming Saturday night, January 12.