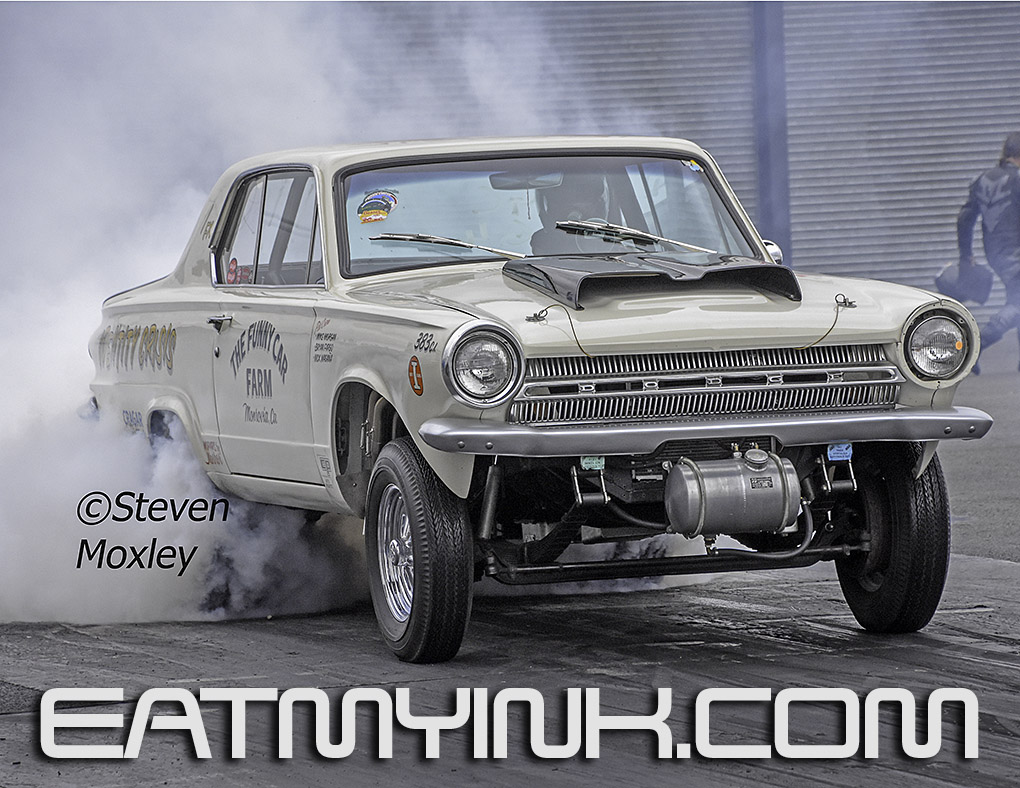 I’m finally (and apologetically) getting around to posting Steven Moxley’s excellent follow-up to his Redline Rumble coverage from Santa Pod Raceway. If you read Part 1, which you will find here, you know that there were some strong winds sweeping the Pod. Saturday’s headwind continued on Sunday during qualifying for the ACU Championships Round 4.

Dave Peters qualified number one in Funny Bike with an 8.260. Lorcan Parnell ran a troubled 8.989 and Dave Buttery was the only other rider and ran 15.447. Phil Crossley still had issues from Saturday and didn’t make a run.

Peters broke the beam on his bye run. Parnell sorted his problem and beat Buttery with a 6.752.

Parnell picked up his second ACU event win with a 6.721 at 207.04 mph to beat Peters who had a delay problem with the bike off the start line.

The two wins over the weekend for Parnell has nearly clinched the championship.

Rounding off the field were Daniel Bergelin 8.227 and Paul Hambridge 8.421.

So once again an all-Dutch final—could Schmidt stop Jennes? Schmidt got off the start line first but Jennes spun his rear tyre and couldn’t catch Schmidt, who won her first ACU event with another p/b of 7.636.

Jennes leads the Championship just ahead of Schmidt.

Smith ran 7.698 in E1 but had a fuel injector problem at the end of the run. Bowe wasted a 7.088 when he redlit against Pete Field, who picked up his second win.

Mechaell picked up his second win when Roe broke out with an 8.492.

Straightliner racer James Cross was the number one 9.50 qualifier with a 9.591, with Brett Cordelle his nearest challenger with a 9.612.

Points leader David Bowe lost in round one of eliminations to Leo Lester.

Lester faced reigning champion Richard Sawatzki in the final. Lester lost when he broke out with a 9.430.

Mike Nelthorpe was the number one ET Bike qualifier on his 267cc Aprilla with a dial-in of 13.70 and ran 13.711 for his first ever top spot at an event. Dave Grundy just edged Paul Adams for second spot.

But it was reigning champion Phil Pratt who won the event, beating Jasmine Cordelle in the final.

The B&G Racing Falcon pulled a redlight against Tim Holmes in round one of Gasser eliminations. Lee Pike also redlit against Brian Gibson.

Going into the final round at the Hot Rod Drags meeting, there are five drivers in with the chance of winning the championship.

Super-Charged Outlaws rules are that the vehicle has to run quicker than 9.9 seconds, on a dial-in system.

Simon Barlow ran a best-to-date 8.08 at 169.25 in round one of Outlaw Anglia eliminations.

In the semifinals, championship points leader Colin Millar faced his nearest challenger for the championship Jed Guy, who unfortunately broke on his burnout, leaving Millar a solo run to the final. In the other semi, Scott Crookston beat Barlow 7.819 to 8.248.

Millar turned the wick up and ran low ET of 7.430 to take the winlight and extend his points lead. Crookston ran 7.814.