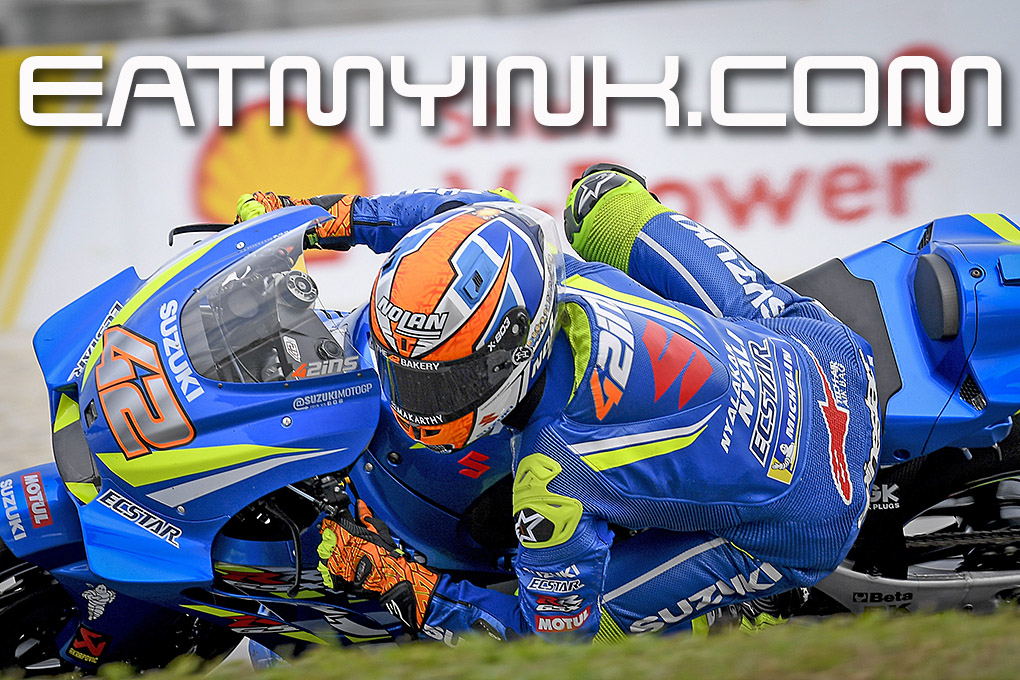 Alex Rins (Team Suzuki Ecstar) topped the timesheets on Friday at the Shell Malaysia Motorcycle Grand Prix after going quickest in FP2, but there are four factories in a tenth and a half on Day 1. Rins heads Andrea Dovizioso (Ducati Team) on the combined times by just 0.089 after setting a 1:59.608, with Marc Marquez (Repsol Honda Team) completing a top three covered by somewhat fitting 0.093 seconds at Sepang. Valentino Rossi (Movistar Yamaha MotoGP) makes it four factories in the top four and four factories within just 0.159 seconds.

Despite the threat of rain throughout the day, the MotoGP riders were able to get two full dry sessions done and dusted in Malaysia, and it was the Suzuki leading the way as the chequered flag came out at the end of FP2. Rins was the man at the summit thanks to his late FP2 time, with Dovi failing to improve on his FP1 time in the afternoon session – P7 for the Italian in FP2.

Marquez, meanwhile, finished the second session in P2, but the World Champion had an eventful day. In typical Marquez fashion, the number 93 had to save the front of his RC213V numerous times across the two sessions.

There were no such close shaves for fourth place overall and sixth fastest in FP2 Valentino Rossi though, as ‘The Doctor’ had a strong Friday to end the day so close to the top. Just behind him and fifth on the combined times was Jack Miller on board his Alma Pramac Racing Ducati, the Australian setting a quickest time of 1:59.771 to end FP2 in P3, and Miller was also the first rider to dip into the 1:59s in FP2. Meanwhile, Australian GP winner Maverick Viñales (Movistar Yamaha MotoGP) completes the day P6 on the overall times, the Spaniard going fourth fastest in FP2 to end the day less than two tenths off P1.

Just 0.009 behind him at the end of Friday’s proceedings sits Danilo Petrucci (Alma Pramac Racing), P7 overall for the Italian thanks to his FP2 time, with Johann Zarco (Monster Yamaha Tech 3) improving by over half a second in the second session to end Friday in P8. Completing the provisional automatic Q2 places were Andrea Iannone (Team Suzuki Ecstar) in P9 and Aprilia Racing Team Gresini’s Aleix Espargaro in P10 – the latter struggling with grip in the afternoon.

Returning from injury, Jorge Lorenzo (Ducati Team) endured a tough opening day. The five-time World Champion finished bottom of the timesheets and over three seconds adrift of the fastest time, and will further assess his fitness on Saturday.

So it’s Alex Rins on fire on Friday in Sepang; a top turnaround after one of his bikes was on up in flames in pitlane on Thursday. The times are super close with 0.203 covering the top six, but FP3 gives the premier class riders the last chance to improve to see if they can cement an automatic place in Q2. Tune in for that at 10:55 local time (GMT +8), with qualifying beginning at 15:10 local time.

Friday at the Shell Malaysia Motorcycle Grand Prix belonged to Alex Marquez (EG 0,0 Marc VDS) in the Moto2™ class, as the 2014 Moto3™ Champion topped both FP1 and FP2. The Spaniard managed to best Fabio Quartararo (MB Conveyors – Speed Up) at the end of FP2 by 0.030 after setting a 2:06.928 on his final lap so it was close but he kept the top spot, with Luca Marini (Sky Racing Team VR46) third – 0.161 back. He was just ahead of teammate and Championship leader Francesco Bagnaia and the two did a good few laps together on track, perfecting their teamwork…

The track conditions were tricky for the opening minutes of the second session but with the rain clouds clearing, the Moto2™ field were able to get a good dry stint on Friday afternoon. At the end of play, Marquez and Quartararo were the only two riders to venture into the 2:06s, the latter improving from a P13 finish in the morning, but it was Bagnaia who had the advantage in terms of the title fight – with sole rival Miguel Oliveira (Red Bull KTM Ajo) a little further back in eighth.

Between the two, it was Mattia Pasini (Italtrans Racing Team) who completed the top five on Friday and the Italian led FP2 by over a second at the one point after ending FP1 in P2. Then the first of the KTMs on the timesheets was Sam Lowes (Swiss Innovative Investors) in P6, as he just got the better of Oliveira.

Behind the Portuguese rider, Pons HP40’s Lorenzo Baldassarri completes Friday in P8, with Remy Gardner (Tech 3 Racing) kicking off his weekend with a solid P9 on the combined times – the Australian consolidating a top ten place after ending FP1 in P7. Australian GP winner Brad Binder rounded out the top ten on board his Red Bull KTM Ajo machine, moving up the timesheets after a tougher FP1.

It’s tight at the top in the intermediate class with Saturday and qualifying now on the agenda. FP3 is first though, so tune into that at 09:55 local time (GMT +8) before qualifying at 13:30.

Tony Arbolino (Marinelli Snipers Team) ended Day 1 at the Shell Malaysian Motorcycle Grand Prix at the top of the timesheets in the Moto3™ class, with the Italian setting a 2:14.227 on a dry Sepang International Circuit before the rain started to fall with just under 20 minutes remaining, curtailing the day’s action. John McPhee (CIP – Green Power) and Aron Canet (Estrella Galicia 0,0) completed the top three, with Championship leader Jorge Martin (Del Conca Gresini Moto3) rounding out a top four covered by a mere 0.024 seconds.

After his huge Japanese GP crash, Niccolo Antonelli (SIC58 Squadra Corse) returns to action in Malaysia still nursing his injuries picked up in Motegi but nonetheless, the Italian impressed on Day 1 to end fifth fastest, just 0.122 off the top. Countryman Andrea Migno (Angel Nieto Team Moto3) completed Friday another tiny margin in arrears, 0.003 back in P6, with the same gap separating him from another Italian in P7: Enea Bastinaini (Leopard Racing). Title contender Marco Bezzecchi (Redox PruestelGP) is eighth overall, but the gap is just 0.155 between him and the fastest time.

It was a slightly early end to Moto3™ pacesetting on Friday as the rain fell, so will the lightweight class have more luck with the weather on Saturday to get a dry FP3 under their belts before qualifying? Find out when they head back out on Saturday morning for FP3, with qualifying then beginning at 12:35 local time (GMT +8).