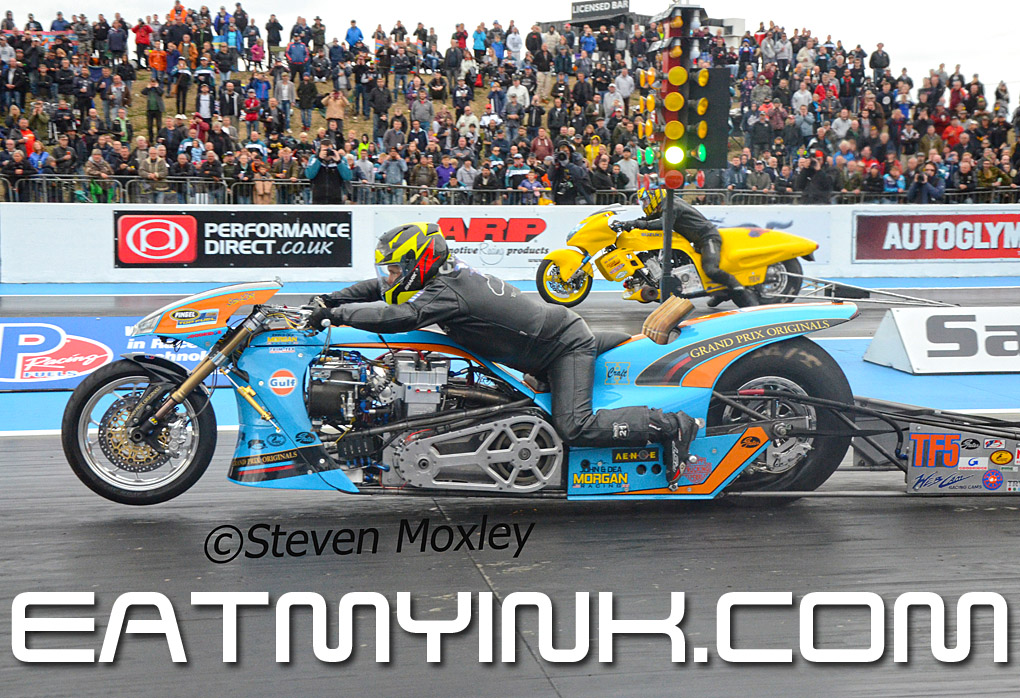 Note: Steven Moxley apologizes for not having the normal detailed report, due to his press pass restricted to only two days by the Santa Pod staff. Please express your concerns about restrictions placed on Steven’s access to Santa Pod’s Nicola Hart at nicola@santapod.com

Filippos Papafilippou ran 5.814 at a personal best speed of 240.29 for #1 Top Fuel Bike qualifier, but he had a problem in the shutdown area and parted company with the bike in the field and Fast Fil was out of the show. But the bike has been repaired and is on it’s way to Valdosta for the Man Cup Finals.

Steve Woollatt qualified in number two spot with a 6.276-202.59. Rene Van Den Berg’s engine block split in two on Friday and a spare motor was fitted.

Championship contender Eric Richard qualified in fifth spot, then he redlit against Stuart Crane in round one of eliminations. That meant Papafilippou was the 2018 European FIM Champion.

Woollatt won the event when Crane was a no-show in the final.

Marcus Christiansen became the 2018 EDRS Pro Nordic MC Champion in SuperTwins two weeks before this event.  He qualified number one at Santa Pod with a 6.595 and with bye run in round one of eliminations, became the 2018 European FIM Champion as well.

Martijn De Haas was the nearest challenger with a 6.664. Neil Midgley was in number three spot at 6.717.

Allan Davies damaged a piston and barrel on Friday on the Puma V-Twin, so his dad Pete went home, turned the machines on at 6.00 pm in his workshop, and machined a piston and barrel. He finished at 9.30 pm, had tea and biscuits then to bed. He was back at the track early in the morning, the team rebuilt the motor and ran 7.312.

In round one Davies, ran close to his p/b with 7.182.  Christiansen knocked Davies out in the semis and De Haas beat Midgley in the other semi-final.

The final saw the new champion against the out-going champion. Christiansen capped a successful season with a win, 6.565 to De Haas’ 6.781.

Title challenger Bertrand Maurice ran 7.362 for third spot and faced Hope in round one.

Charly Abraham ran a personal best of 7.219 for number two spot. Martin Bishop had a brand new motor/transmission and ran 7.424-178.

There were rumours that this meeting is the last that Mark Smith will compete in Pro Stock Bike, that he is moving over to Funny Bike next year. Smith gated Abraham, only to have an issue at the 300 foot mark and shut off the motor.

Bishop lost to Newbury in the semifinals. Maurice had to beat Abraham for the championship and Abraham redlit (-.005), so Maurice is the 2018 European FIM Champion.

It hasn’t been a good year for former Super Street Bike champion Garry Bowe. After qualifying number one with a 7.032, he blew another motor in round one of eliminations.

In eliminations, Steve Venables ran the first six –second pass of the weekend with a 6.999 to beat his daughter Jemma. Rudolfo Maduro ran a 7.111 p/b. Dainty ran another p/b of 7.515.

Rudi Zorzi was a no-show in the first semifinal, giving Lund a bye run. Venables beat Stubbins in the other semi.

The 2018 European FIA Top Fuel Champion Anita Makela was on record setting pace during qualifying with a 3.894 and then a European ET record of 3.870. Antti Horto was the only other driver in the threes with 3.935.

This may be Urs Erbacher’s last race, with his car up for sale. He had Aaron Brooks crewing for him and ran 4.181 for third spot.

Erbacher had tyre shake in the final and Makela capped off a super weekend with a win.

Andy Robinson ran 5.913 to beat Jan Ericsson 5.924 for third spot, then redlit against Alund in the semi-finals. Ericsson beat Mats Eriksson in the other semi.

Ljungdahl won the event when Malmgren had tyre shake in the final.

The title was between the Habermann brothers—who ever wins their race would be champion. The title went to Dennis with a 5.307 to Timo’s losing 5.445. Lagg won the other semifinal.

Habermann won the event with a 5.345 to Lagg’s best run of the weekend 5.429, and will have the number one plate on his car next year.

Steve Ashdown ran 4.999 in round one. Birgette Bremnes beat Jason Phelps with a 5.445, but damaged her motor.

Semi-finals and Ashdown had engine damage so Kent had a bye run and ran 4.399. Phelps had a brief fire just off the start line, fire went out. Chapman ran 4.803.

In the final, both cars had tyre shake and Kent took the winlight.