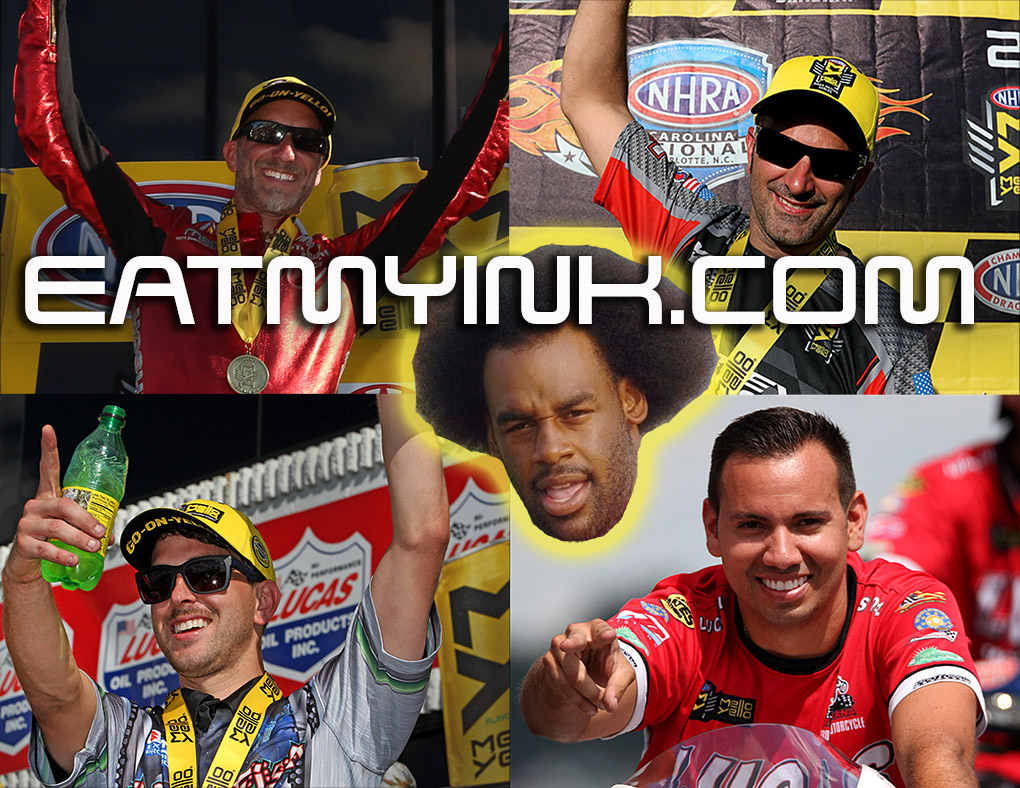 A wild Mello Yello Countdown to the Championship race in Pro Stock Motorcycle comes down to this weekend’s 54th annual Auto Club NHRA Finals at Auto Club Raceway at Pomona, as a whopping six competitors still remain in contention to win a world title.

With the points lead changing hands at the first four races and plenty of thrilling action along the way, it’s the perfect way to finish off a playoff race that has been filled with drama.

With two playoff wins, Matt Smith currently holds a slim four-point lead against defending world champion Eddie Krawiec. LE Tonglet and Hector Arana Jr. sit 61 and 64 points back, respectively, while Jerry Savoie (101 points back) and Andrew Hines (113 points back) are still mathematically alive for a title, setting up an unforgettable finish in Pomona.

For Smith, who is seeking his third NHRA Mello Yello Drag Racing Series world title, he’s simply looking forward to a big weekend. “It’s very exciting for us, the fans and our class in general, and it’s going to be a battle,” said Smith, who celebrates his 36th birthday on Sunday. “Hopefully we can do our job and come out on top in the end, but a race like this, I think it speaks well for our class. We’ve run 15 races and somehow only four points separate Eddie and me. It’s going to be fun and hopefully we can put it all together and do our job. We’re focused on trying to win the race and if we do that we win the title.”

Smith, Tonglet and Arana Jr. all have playoff wins, and Krawiec would like to join that club this weekend to clinch his fifth world title. He was the regular season points leader and held the points lead after the playoff opener, but Krawiec has had to make up ground in recent weeks. He’s done that on his Screamin’ Eagle Vance & Hines Harley-Davidson to close in on Smith heading to Pomona. With four career wins at Pomona and a penchant for racing even better in the spotlight, Krawiec, who has four wins in 2018 and 47 for his career, insists he’s ready to put together a memorable weekend to end the year.

“If we go there win the race, we win the championship, but that’s easier said than done,” Krawiec said. “But we’re in a good position and I feel like I perform better under pressure. I know what’s expected and I need to perform. It’s a unique battle in the class this year, but anytime you go into Pomona with a chance to win a championship, it’s been a good year. We’re right in the mix so there’s no need to change anything.”

Arana Jr. jumped back into the conversation with his win in Vegas, while Tonglet bumped Smith from the top spot after his victory in Dallas. That was short-lived after Smith moved back in the points lead for a second time in the playoffs with his Charlotte win, further exemplifying that anything could happen this weekend. Smith was in that high-pressure situation when he won his first title in 2007, beating Chip Ellis in the final round at Pomona to claim the title. If that scenario presents itself again, Smith said he will be ready on his Elite Motorsports Denso Auto Parts EBR.

“I know for the fans they like it when it comes down to the wire and I do really well under pressure,” said Smith, who has 21 career wins. “There’s a lot of pressure in everything we do, but my biggest thing is I just focus on myself. I don’t worry about the other lane. A lot of people can get tied up in the spotlight, but I don’t worry about that. I’m going to go out there focused on what I need to do.”

With a win in Vegas, Funny Car’s J.R. Todd takes a 74-point lead into Pomona over defending world champ Robert Hight as Todd seeks his first career world title. In order to win his first career NHRA Mello Yello Drag Racing Series world championship, J.R. knew he had to put together something special during the Mello Yello Countdown to the Championship. He has done that, advancing to four final rounds in the first five playoff races, but one major obstacle remains at this weekend’s 54th annual Auto Club NHRA Finals at Auto Club Raceway at Pomona if Todd wants to claim a world title.

His victory in Vegas – Todd’s second in the playoffs – gave him a 74-point lead over defending Funny Car world champion Robert Hight heading into the final race of the season. But with the point-and-a-half system in play for Pomona and up to 191 points on the line to close out the year, Todd knows he still has work to do in his 10,000-horsepower DHL Toyota Camry.

“I said earlier this year if we could win four Countdown races we would have a shot at the championship,” Todd said. “We haven’t won four, but we’ve gone to four finals and that’s what it takes along with getting some help. We were 50 back going into Charlotte and we were thinking we need some help now to make up some ground and we got some. Then to cap it off in Vegas with a win, it was nice to get all the points we could and take that into Pomona. Points and a half will make it interesting. We just need to maintain what we’ve been doing and go to the later rounds.”

Hight clinched the world title a year ago at the season-finale in thrilling fashion and will need a spectacular showing this weekend in his Auto Club Chevrolet Camaro SS if he wants to be the first repeat world champion in Funny Car in 16 years. The talented veteran had the early lead after back-to-back playoff wins, including beating Todd in the final round at Dallas, but the past two races have only included one round win, putting the onus on a big performance in Pomona.

“I am confident going into the Auto Club Finals,” said Hight, who has 45 career Funny Car wins. “We are behind but we are going to go in there very aggressive and try to get every point we can. We can’t control what J.R. Todd does unless we race him. But we’ll do everything we can to make a third championship, our second in a row, happen. We’ve already won both AAA races this year and we need to win the third. That’s going to give us the best possible chance.”

Ron Capps (165 points back) and Tim Wilkerson (186 points back) are still mathematically alive, but the championship will likely come down to Todd or Hight. Todd and his team, led by crew chief Jon Oberhofer and co-crew chief Todd Smith, have been on point since winning Indy, posting an incredible 16-3 record in the playoffs. With that in mind, Todd hopes to simply continue this strong run in Pomona, hopeful he will end the weekend with his first world championship.

“If you ask me, you don’t change a thing,” said Todd, who has five wins in 2018. “I’m not going to change the way I drive and I don’t think that Jon O. or Todd are going to change the way they are running the car. We just need to keep making consistent runs. Step one is getting qualified there in Pomona and try to put it in the top half. Then we take it one round at a time. It’s not over yet. We still have a lot of work to do in Pomona. We just need to keep after it and not let up.”

On the strength of five straight wins in the Countdown to the Championship, Steve Torrence claimed the Top Fuel world title in Vegas, and he’ll look to sweep the playoffs in Pomona.

Second-year Pro Stock star Tanner Gray has seven wins in 2018, including two in the playoffs, and currently holds a 140-point lead over Jeg Coughlin Jr.

The Auto Club NHRA Finals will also feature thrilling competition in the Lucas Oil Drag Racing Series, where the future stars of the sport earn their racing stripes. After Nitro qualifying, stick around to see the spectacular Cacklefests during the weekend.

Those in attendance will also have the once-in-a-lifetime opportunity to interact with some of the biggest names in drag racing during the NHRA Legends Tour. This includes meet-and-greets, autograph sessions, and a variety of other activities. Legends scheduled to attend the Auto Club NHRA Finals include Kenny Bernstein, Greg Sharp and more.

As always, fans can interact with their favorite drivers as they’re granted an exclusive pit pass to the most powerful and sensory-filled motorsports attraction on the planet. This unique opportunity gives fans direct access to the teams, allowing them to see firsthand the highly-skilled mechanics service their hot rods between rounds, and get autographs from their favorite NHRA drivers.