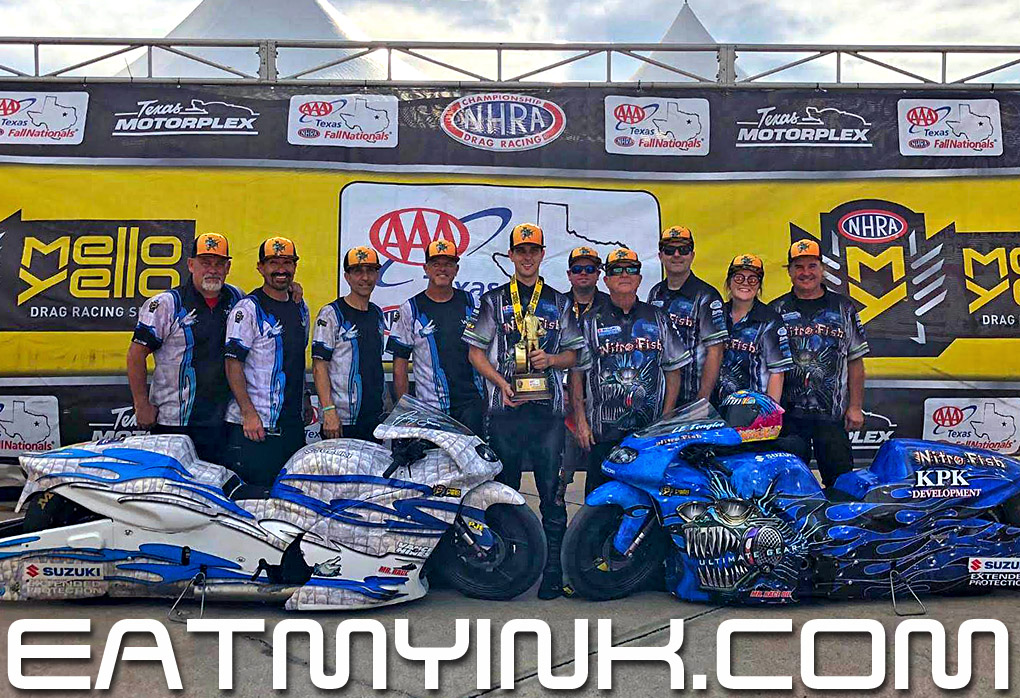 The win put LE in the points lead by 47 over Eddie Krawiec, who he beat in the semis. “We’re leading the points now and we’re not going to look back.”

Tonglet also picked up wins against Krawiec’s Vance & Hines/Screamin’ Eagle/Harley-Davidson teammate Andrew Hines in E1 and Angelle Sampey. “It was a lotta work,” continued Tonglet, who noted that the WAR team changed Savoie’s motor twice on raceday. “Jerry did not get there for a lack of effort, that’s for sure.”

“We weren’t getting what we wanted in qualifying,” said WAR tuner Tim Kulungian. “I looked at some of the numbers and we were running OK in the back but we cannot get to the eighth mile.

“First (eliminations) round came and it was still just not doing what we wanted it to do,” said Kulungian. Still, Savoie’s Suzuki had enough in it with a 6.94 to dispatch Joey Gladstone’s 7.02.

“So we changed an engine,” continued Kulungian. “We knew this would be the time to change an engine if we were going to change one, so we did it.

Round 2 came along and Karen Stoffer redlit against Savoie. “We got lucky there, because our bike went a 7.0something,” said Kulungian. “I saw the 7 and shook my head and told Freddie (Freddie Camarena, who pushes Jerry back to the pits from the top end) ‘Go get Jerry and start taking that motor back out. We’re putting the other one back in.’

“Different engines are set up for different things and sometimes they have different solutions for some of our problems. We thought the one engine would be better for our problem but it was so far off and we knew we could run mid-.90s with the other engine. So we knew we could be much more competitive more quickly if we went back to the other motor.”

The switch paid off, as Savoie beat one-race-teammate Steve Johnson in the semi and made his quickest pass of the weekend against Tonglet in the final.

“I told them both before the final ‘That’s pretty much everything I’ve got,’” continued Kulungian. “Everything the team achieved today was definitely earned. These guys had their tongues hanging out. We pushed and pushed on them and they just gave us more.”

Kulungian laughed nervously as he said “You really learn how much confidence people have in you when explain your process to them. The process we’ve adopted, we really do better on raceday. They’re kinda looking at you in qualifying like ‘Where’s the numbers at?’ Then you go into first round on raceday and it’s ‘Whew, OK, there they are!’ But I’m really working hard on being better in qualifying. We could use some of those little points. Come Pomona, those points can mean something.”

Speaking of points, Matt Smith held the lead before he went out first round, victim of the recurring bog he thought was cured.

Hector Arana Jr. apparently had a brain bog of some sort with a .611 reaction time—which would have still been an awful light in the .400 reaction time days. So Kelly Clontz had a .101 and left first….

As for me, even though half the PSM field thinks that I am internet loose cannon Arman Zinusal (I am not) and are ready to punch me, I’m looking forward to this weekend’s race at zMAX.