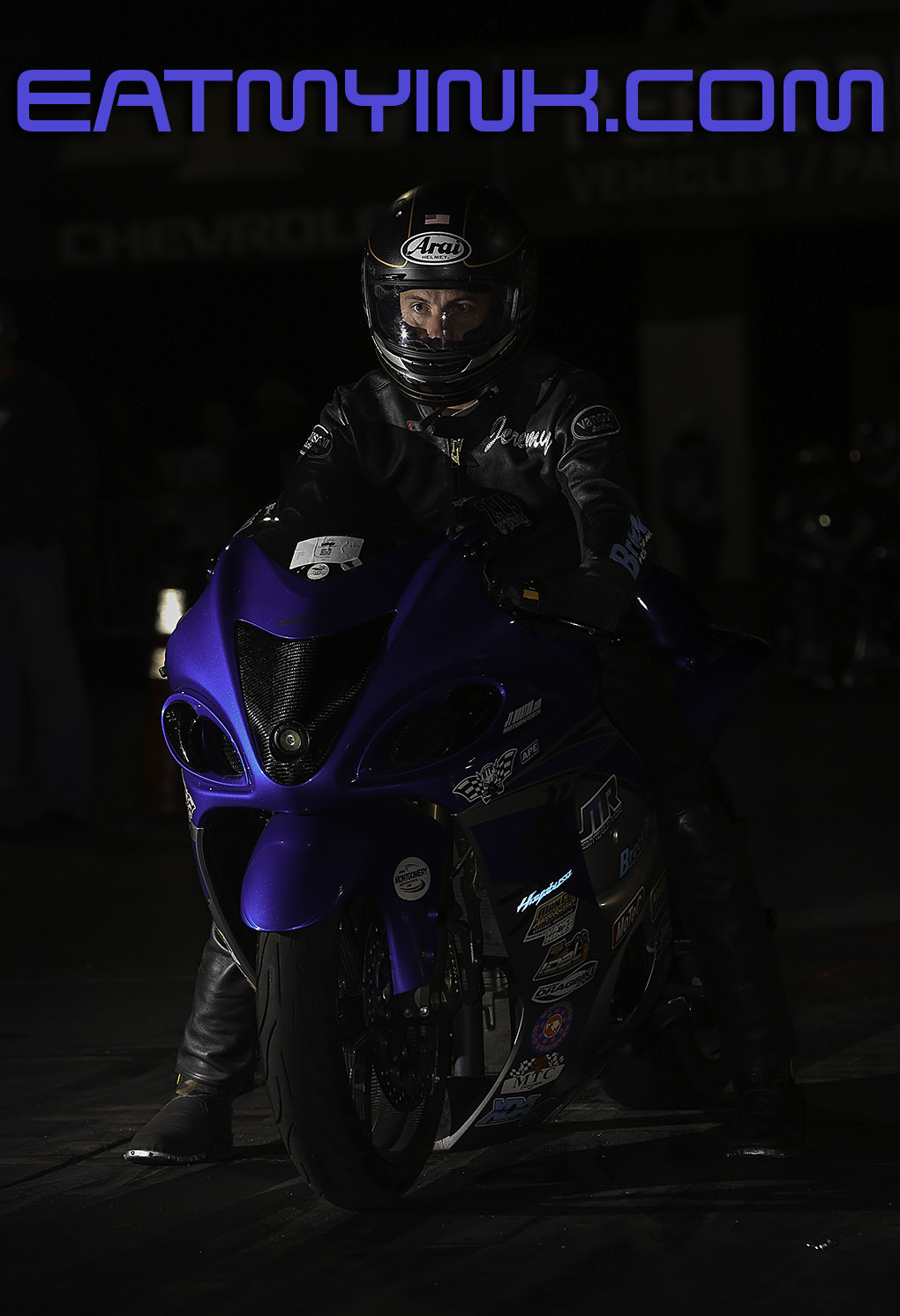 Teasley rode his ridiculously fast Suzuki Hayabusa past Deadly Dustin Lee in an all-streetbike final for the $4000 Top Gas win. Lee took the tree by .006, but Teasley’s bike is known for it’s screaming top end charge and Dustin—like everyone who races Jeremy in Top Gas—probably feared giving up the stripe and dared not chop the throttle. So Lee broke out with an 8.156 at 155.90 miles per hour while Teasley timed the line to .006 over the 8.20 index at a whopping 182.92.

Ohio native Teasley’s not only won at Indy many times, he won twice on Sunday alone. Riding the same ‘Busa but dialed back to 8.94, Teasley put .038 on Louisiana racer Brandon Pellichino and scored a double breakout Kevin Dennis Insurance Street ET win on Sunday.

Ohio wasn’t through with the winning, and neither was the Teasley family. Jeremy’s younger brother Cameron broke through for his first McIntosh/Grayson Machine & Fabrication Pro Street win and the first for Nem Beltran’s iconic “Lucky” turbo ‘Busa.

Cameron’s win grew more likely as the day wore on and the top qualifiers fell. Number 1 qualifier Gabe Frederick (6.718 at 216.97 mph) struggled occasionally through the weekend with a chassis pulling to the right, which is how he fell to Gateway winner Gaige Herrera in round 2 on raceday.

Atlanta and Indy winner Frankie Stotz led through the first two rounds of qualifying with a 6.75 run on Friday. But his Honda pulled up lame with a broken fourth gear against Scott Grady on Al Mart’s “Twisted” in E1.

Third qualifier was Sweden’s Patrik Borgh, competing in his first U.S. Pro Street race. A veteran of the similar Super Street Bike class in Europe, Borgh made his first passes in 9 years at the August NHDRO race aboard the former championship winning turbo ‘Busa recently purchased from Bud Yoder. He ran personal bests of 6.92 at 213 to qualify third and advanced past James Hendricks in E1 before wheelieing and losing to Quicktime Motorsports boss Rudy Sanzottera in round 2.

So when number 5 qualifier Cameron met fourth qualifier Luis Hornedo in round 2, they were the two highest qualified bikes left in the field. When Hornedo’s bike bogged so bad it seemed to be in sixth gear, and Cameron ran a personal best 6.90 for the win, the young Teasley suddenly seemed like a surprise favorite.

Cameron offset Hererra’s .032 starting line advantage in the semi by improving his personal bests by .001 and some 3 mph to make the final.

Sanzottera faced another underdog having a big day in the other semi—Derrick Riffell on Josh Franklin’s bike. Neither of these two seemed to want to leave the starting line: Rudy with an .097 and Derrick with a .107.  Sanzottera’s ET was also about a hun quicker and he advanced to the finals to face Teasley.

Perhaps overcompensating for his slow reaction in the semis, Rudy went too far in the other direction in the final and lit the redeye. Cameron kept the coals on in the other lane and improved the personal bests for him, tuner Beltran, and the M2.shocks equipped “Lucky”: 6.879 at 208.55 mph.

“I’ve been to 21 finals in both cars and bikes and never won!” noted Sanzottera.

It was a great day for the class, proving that anyone who’s invested in the right set-up and worked hard on all aspects of their game can win a Pro Street race at NHDRO.

Ditto for Performance Racing Products Grudge, where all eyes turned towards big name bikes and riders while the other lane flourished. Richard Long rode 8 Below’s “OMG” nitrous ‘Busa past Gabe “Petey” Oldfield on the AM Performance nitrous GSXR1000 after the smaller bike lost bottle pressure in the Shootout final. That was worth 5 grand to Long and the 8 Below crew.

The underdog tsunami continued when Ron Maddox showed that old-school turbo Kawasaki funnybikes can still seal the deal in Pro Open, at least when the other lane redlights. Champion Chris Cutsinger had his new-school turbo ‘Busa running strong all weekend but nicked the redeye by -.009 in the final, lighting the winlight for Maddox and his family.

Class champion Chase Morris and his Fast Times Motorsports team boss Jeff Jones made their first NHDRO race of the season. But Morris broke a tranny before qualifications were complete and never made it to the water box for eliminations. Jones did, but that’s where his clutch basket broke.

So now Fast Times’ hopes were on the Kawasaki of Smokin’ Joe Rodney, who nailed a .010 light to skate past Johnny Bond in round 1. Ohio and August Indy winner Jimmy Muntain returned the favor with a .012 on Rodney in E2, but slid out of the groove and didn’t run the number.

Rodney had the bye to the final while Gateway winner Dan McCarten advanced past Les Stimac in the other semi. Smokin’ Joe smoked McCarten at the tree and won the double breakout final.

Winners other than the usual suspects continued through some of the Sportsman classes. Former class champ Markham had the chance to reverse that trend in Millennium Trailers Super Comp, but a tough day of racing for the usually spot-on Spooky continued with a double breakout loss to Andy Frame.

Shane Stevens Jr. and Canadian Murray Lonsbary faced off in the M2.Shocks Crazy 8s final, but neither seemed too anxious for the win with .123 and .126 lights—advantage Lonsbary. Then came the finishline: 8.945 and 8.988—advantage and win to Stevens.

If the Canadian Lonsbary came up one ticket short of a win, the veteran Canadian racer Mike “King” Konopacki made up for it by claiming two MPS Pro ET wins. The multi-time AMA Prostar/Dragbike champ beat Doug Fisher in an “all-grandpa” Saturday final and with a .004 light against redlighting (-.002) August Indy Big Money winner Bruce Damewood on Sunday.

It wasn’t all fun and games at Indy, as NHDRO had to fight past several delays caused by oildowns, crashes and ambulance delays. Top Gas veteran racer “Kounselor” Kenny Schwartz was speared at the top end when Nico Grier lost control of a high-speed wobble and was thrown from his mount. Grier was uninjured but Schwartz broke his clavicle, ribs, and suffered hand injuries.

Odell Williams Jr. was banged up but uninjured when he flipped over backwards during Saturday night’s grudge session.

Brian and Niki Welch thank Glenn Grayson and Performance Racing Products for their support and look forward to welcoming everybody to NHDRO’s World Finals at Louisville’s Ohio Valley Raceway on October 19-21.

story and photos by Tim Hailey except for the Richard Long photo, courtesy of David Beaver