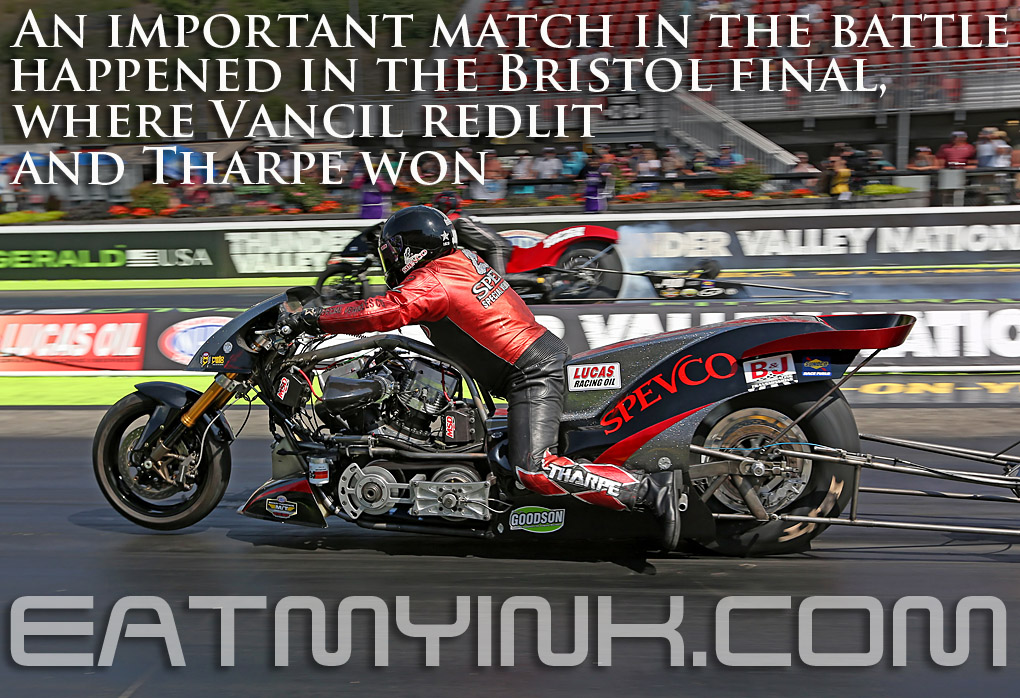 It’s only the second season of NHRA’s Top Fuel Harley class, and the championship battle—and the U.S. Nationals where it will be decided today—show that it has already matured into an incredibly fine vintage. The title will be decided between the top two teams in the quickest field in the history fuel Harley racing—and probably the tightest too.

Sam Wills was the last Top Fuel winner on any kind of motorcycle at the U.S. Nationals and that was all the way back in 1984. To find a nitro Harley winner at the Big Go, you need to go even farther back—to Marion Owens in 1978.

The gravity of the event is especially clear to Romine. He tunes for rider Beau Layne, who failed to qualify and finished 11thin the order.

Meanwhile, Jack’s brother Mike tunes for points leader Doug Vancil and the Vance & Hines team. Vancil came into Sunday unqualified—that’s 0 for 3 in two days of work, and only two more chances to make the field and have any chance at winning the championship he’s led all season.

Vancil completed that task, but just barely. His seemingly solid 6.33 placed him on the bump spot—only 8thin the field.

So Vancil will have to face Turner in round 1 on raceday. Turner’s 6.22 at 233.88 mph has lead the field since Friday’s first session.

If Turner needed anymore incentive, his teammate Tii Tharpe is the one that Vancil is racing for the championship.

“We’re gonna kick ass or go down swingin’,” said Jay, who expects to run somewhere between a .28 to a .32 in the conditions expected for E1.

If Vancil gets past Turner and to the final, and Tharpe gets there too, then the championship is decided right there and then in one race for the whole tamale. Think that would make good TV? “Competition is a great thing, and I’m here for the win,” said Tharpe. “That’s why we showed up.”

Qualified third is the absolutely-beside-himself Jason Pridemore, who made another big leap on his unique, hand-built blown bike with a 6.282 at 223. Rickey House is fourth at 6.287, and Jay Turner Racing’s (JTR) Randal Andras sixth at 6.31.

“So the big question is: who will win the 2018 U.S. Nationals,” said unofficial historian Romine. And, he neglected to add, the championship.

“They can’t say we didn’t put on a great show,” finished Malloy, and it wasn’t even raceday yet.

For more about the season leading up to this championship, read this pre-race article.