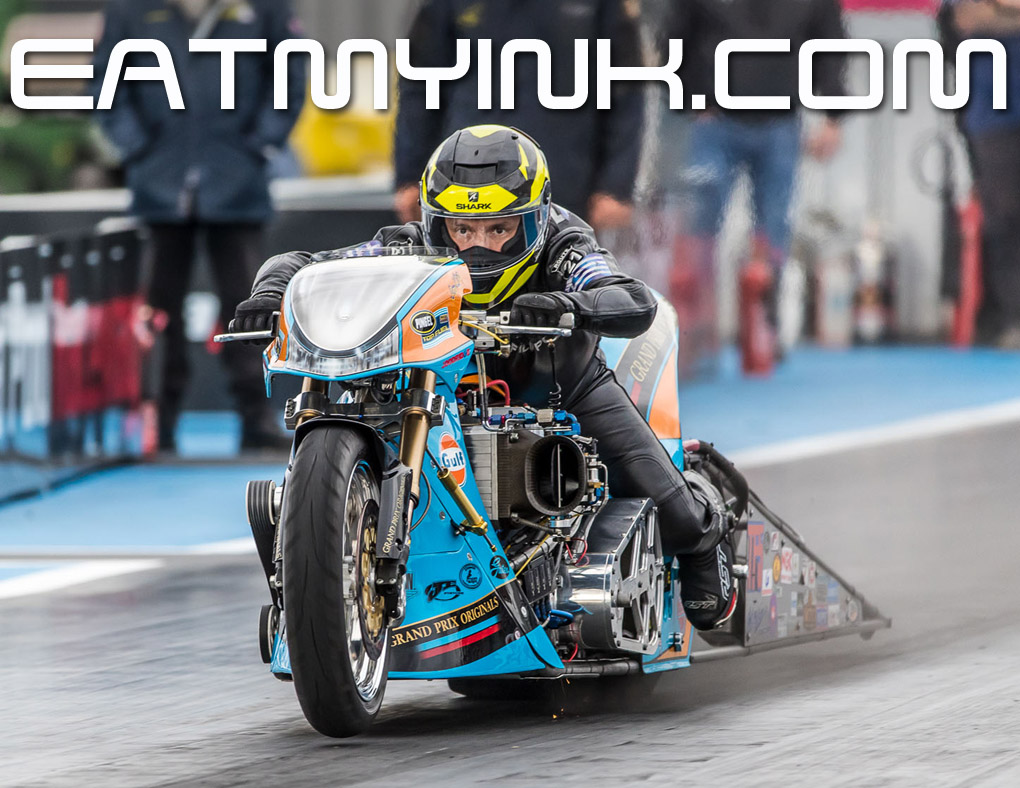 The Gulf Oil Drag Racing Top Fuel Motorcycle team arrived at the final round of the FIM European Drag Racing Championship with a lead in the points from their 100% win rate in the competition to date but still requiring additional points to secure an 11th Championship title and defy the challenge from second placed rider Eric Richard from France.

The first day of qualifying saw team rider Filippos Papafilippou in second qualifying position despite both runs suffering from a loss of traction as the team sought the optimal clutch and fuel settings for the track and atmospheric conditions.

The team made a number of changes overnight and were confident of a good result for the second day of qualifying. They were proved right when `Fast Fil’ ran a fine 5.8143 seconds at a personal best speed of 240.29 mph to put him safely into a number one position with a time and speed that was not to be bettered throughout the event.

However, disaster struck when Filippos was unable to stop the Gulf Oil Puma on the high speed run and bailed from his motorcycle just before the end of the track, with the bike and rider ending some way into the field at the end.

Fortunately Fil escaped with `just’ bruising and after the formal impounding of the bike in `parc ferme’ for inspection the team set about stripping the machine down for damage assessment and repair in anticipation for round one of eliminations the following day.

However, the intensive labours of the team were to no avail as the necessary repairs were unable to be completed in time and the team failed to make their bye run in round one of eliminations.

Despite the huge disappointment of the team they had already secured their record 11th FIM European Championship win, and with new rider Filippos Papafilippou continued their outstanding history of race success.

Team Principal (and former Championship rider) Ian King said “once again we enjoyed an outstanding season. Filippos showed that he was a great fit for the team and demonstrated his skills in piloting one of the fastest and quickest motorcycles in the world to a number of personal and team bests. Our outstanding King Racing team showed once again that they can provide world class performances, and with unique consistency and longevity achieved by the use of the best products in the field from our blue chip technical partners. Gulf Oil products have ensured that our engine has performed faultlessly under the extremes of our sport and I’d like to thank them and all our fabulous partners for their continued support and best in class products”.

Rider Filippos Papafilippou added “the Gulf Oil Drag Racing team are one of very few teams around the world that can demonstrate such a performance and I couldn’t do anything without them. Special thanks to Ian & Debbie King, Michael Beaumont, Marius van der Zijden, Martin Brookman, Nick Pepper and Basak Dogan for their help and support throughout the season”.

The team now move on to compete at their last event of the season, the USA MFC Championship Finals in Valdosta, South Georgia where Team Principal Ian King returns to the saddle for race duties.

For more information on the team:

For more information on Gulf Oil International go to www.gulfoilltd.com

The Gulf Oil Dragracing team exclusively uses and endorses  Gulf Oil greases and lubricants in their history making machine.  The team is extremely proud to be supported by many leaders in their chosen markets in winning the 2018 FIM European Championship: –

GATES– The world’s most trusted name in drive belts, hoses and hydraulics

GOODRIDGE– The most innovative and the best in fluid transfer systems

GRAND PRIX ORIGINALS– The brand for drive and lifestyle, past and present

VANSON LEATHERS– The most iconic brand in motorsport leather goods