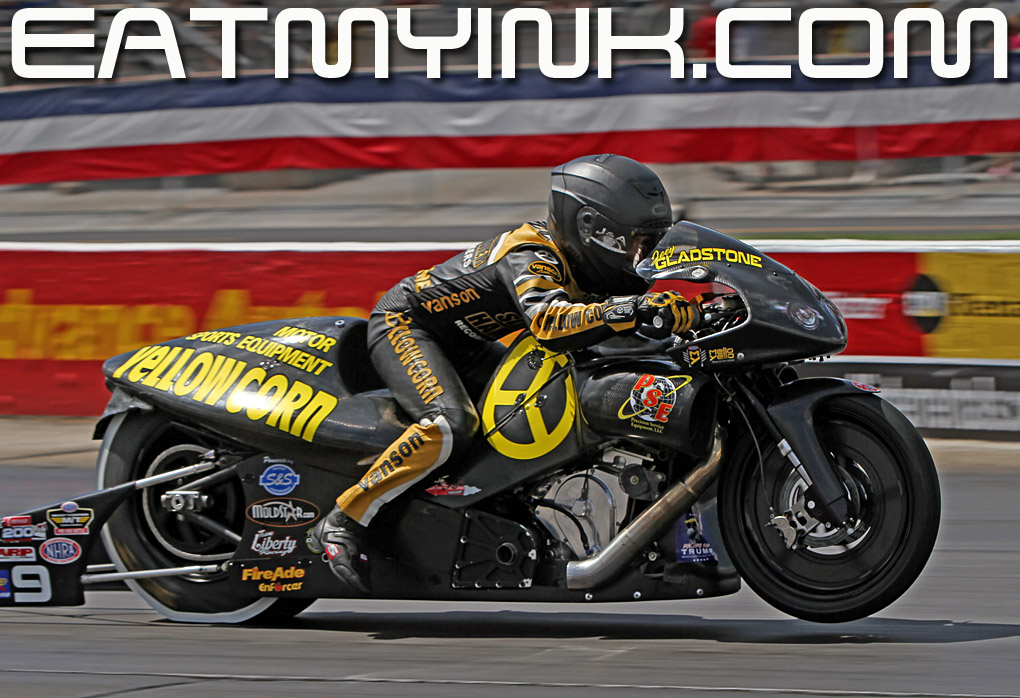 While Top Fuel Harley sees an all-out fight for the championship at the NHRA U.S. Nationals at Lucas Oil Raceway in Indianapolis, several Pro Stock Motorcycle racers will focus on simply having a chance to race for their championship through the fall.

Steve Johnson, Jimmy Underdahl, Joey Gladstone and over-achieving rookie Ryan Oehler all have a chance to make the Countdown to the Championship playoff series, while Scotty Pollacheck, Angie Smith and Angelle Sampey look to secure their future as potential champions. In between sits Hector Arana Sr. on a precarious bump spot.

The points-and-a-half system being in play (150 points to the winner) for the Chevrolet Performance U.S. Nationals also throws another variable into the mix this weekend.

Interestingly, Cory Reed has given up his chance at the Countdown to put Gladstone in the seat of his Liberty Racing S&S Gen2 powered Buell. We’ll have lots more about that story later.

Johnson has won Indy twice, in 2008 and 2005. Coming into the Nationals he sits 12th in points, 19 behind 10th-place Arana Sr. He sits 9thin the qualifying order with a 6.937 and two sessions remaining. “As a racer, you always envision winning,” Johnson said. “I spend more time on my winner’s circle kit than most people spend preparing their Thanksgiving dinner. I not only concentrate on details for the mechanical side, but I also work on the details for the mental side. There’s very stout competition, but I feel like and I can visualize doing really well at this race.”

Underdahl is just 10 points back of Arana. He’s 15thin the order with a 6.949. “If you change your routine, that’s where you start to lose it and start making mistakes,” Jimmy said. “If you do that, you lose your focus. We’ll make sure we’ve got everything ready to go and everything that’s on the line gives you that motivation to try to do better. I think it’s going to take going to the semis to get into the Countdown. We’re all gunning for it and it’s going to be a battle.”

With Gladstone gone from their team to Liberty’s, Underdahl’s team has one less bike to worry about underneath their tent. Team co-owner Gary Stoffer is relieved to be able to focus on their three remaining Suzukis.

Gladstone’s new ride is currently qualified 10th—.003 quicker and two spots ahead of the quickest of his former teammates, Scotty Pollacheck. Joey is 36 points behind Arana.

Sampey is just 19 points ahead of Arana and dangerously unqualified in 17thwith a 6.97.

Krawiec remained atop of the qualifying order for the second day with his Friday evening 6.825 at 197.02 on his Mello Yello liveried Vance & Hines Harley-Davidson. He is chasing his third No. 1 qualifier of the season and back-to-back victories at Indy. Watch this interview with Eddie:

Krawiec’s eammate Chip Ellis moved up to the No. 2 spot with a 6.831 at 197.48 on the development Street Rod. “Chip is the best rider out here,” Eddie Krawiec told me without hesitation. “He’s going to be testing for us for 2019, that’s the reason we have that bike out here (at Indy and in the Countdown). If he happens to win some important rounds, well that would be OK too.”

Mark Paquette showed that has indeed gotten a handle on his S&S Gen2 powered Buell, sitting 7thwith a 6.893.

Behind Paquette is the precariously sitting Arana Sr. with a 6.926.

The third and final day of qualifying at the 64th Chevrolet Performance U.S. Nationals begins Sunday at 12:00 p.m. Catch the action live at 4 p.m on FOX Sports 1 (FS1).

story, video and photos by Tim Hailey with help by NHRA