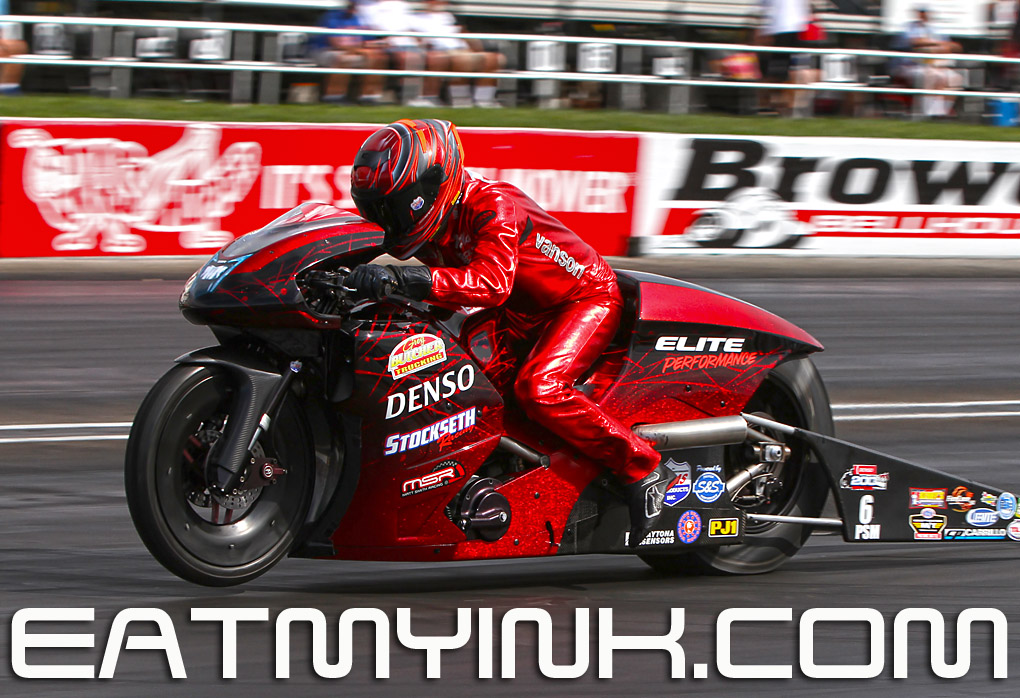 Matt Smith secured his third Pro Stock Motorcycle No. 1 qualifier of the season, 29th of his career and fourth at the Chevrolet Performance U.S. Nationals with his 6.814 pass at 199.14—a blistering lap in blistering heat in the final round of qualifying. “I’ve got a lot of confidence in our motorcycle,” Smith stated. “Ever since we debuted this bike (with the new EBR body) it has been the fastest thing on the property and it showed it again today. I’ve just got to do my job and we must have no failures of any kind.”
In a cruel twist of fate, Matt’s wife Angie did not get down the track that round as her transmission locked up. That left Angie unqualified in 17th and her spot in the Countdown to the Championship very precarious.
While Angie was distraught at the starting line, the NHRA big screen showed an ecstatic Angelle Sampey celebrating on the big end as she bumped her way into the field—and kept her Countdown hopes alive—on her last shot
Still on the verge of tears hours later in the pits, Angie said the stand-up thing: “We shouldn’t have been in that position anyway.”

Matt will face-off against Jimmy Underdahl in the first round of eliminations. Hector Arana Jr. qualified second with his 6.817 at 198.58 on Sunday, he will race Karen Stoffer in the first round. Scotty Pollacheck secured his spot in the Countdown and will face Chip Ellis first round.

story and photos by Tim Hailey with help by NHRA