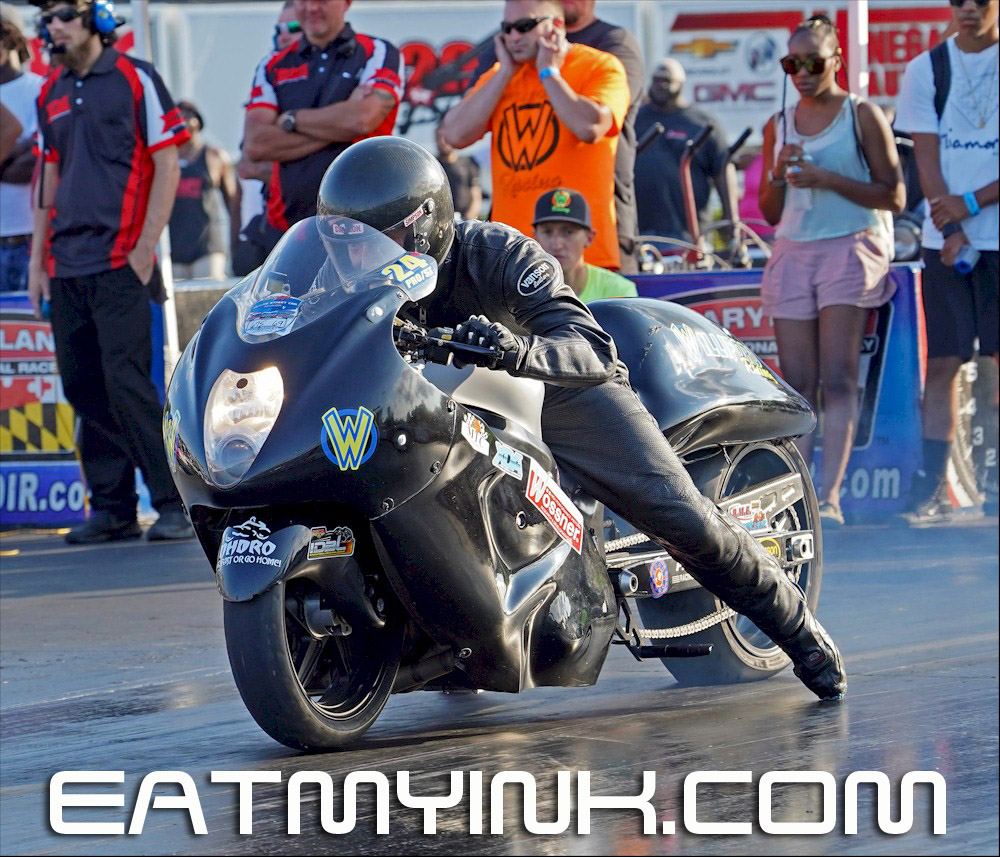 This past weekend it wasn’t the weather gods that brought the heat to Maryland International Raceway (MDIR) for the 18th annual WPGC Bike Fest, it was the racers that showed up with their best tune-ups ready for serious competition. As always, the WPGC Bike Fest featured some of the fullest fields this year and a variety of activities going down all over MDIR.

The volume was turned up at this event with Live music featuring new artist King Combs, a Baggers vs Slingshot Sound Off, custom bike show, sound competition, and bikini contest.

And if that was enough ground shaking for you, Top Fuel hit the strip putting down their own beats. Top Fuel match racing returned for the fifth year in a row with Larry ‘Spiderman’ McBride and Dave Vantine, with Vantine taking three wins out of four matches. Spiderman ran a great 5.76 and then a redlight 5.87 at 250mph.

It was an excellent weekend for Orient Express Racing Pro Street—they broke records, half the field qualified in the sixes, they had their first shootout in qualifying, and a first-time XDA winner.

Rodney Williford smashed the Pro Street record with a 6.61 at 224.73 in round two of qualifying. Rodney also made four passes over the July heat weekend in the 6.60’s.

This event also featured the first Penske Racing Shocks Pro Street Shootout during qualifying. Eight racers put up $250 for a chance to win $2,000, and $250 for runner-up. With only one qualifying round the night before, racers were paired up in the lanes by a random card drawing to create an eight-bike ladder.

Mark Gargiulo, Rodney Williford, and Chris Connelly took first-round wins to make it a DME vs. Williford semifinal. Teasley got the holeshot on Gargiulo, but Mark didn’t have the steam to catch Teasley’s 6.76.

On the other side, Williford and Connelly had identical reaction times, but there was nothing Connelly could do against Williford’s 6.61 tune-up.

Teasley fell in round two of Sunday eliminations to Jake Dugan’s 7.05. Payne took out Jordan Haase in round two, only to have his teammate Williford send him to the trailer in the semifinal.

DME Racing’s Chris Connelly made it to the final to meet Williford for another Williford vs. DME final. Both bikes left hard and fast as they stayed side-by-side down the track, both racers struggling to keep their front wheels down, but it was Connelly who was able to maintain the gap in front of Williford to take his second win of the year. This win now sends Connelly to the points lead of Orient Express Pro Street.

DME Racing Real Street had eighteen racers show up and put on one hell of a show.

During Friday night’s qualifying session, Eddie Chapman and Spencer Claycomb ran the fastest side-by-side pass in Real Street history with a 7.70 and 7.695.

In Q2, Claycomb broke the record with a 7.655, but it would only stand for a minute as Chapman would break it again that session by the narrowest of margins at 7.654, and breaking the MPH record with a 195.17

Rookie Alisha Malone qualified with an 8.019 and seemed sure she to get her first seven-second pass this weekend, but problems in the first round will keep her waiting until next month.

In eliminations, Michael Sweeney would take out Chapman in round two to end his hopes for a repeat win. Claycomb would take out Charles Dominique, Mark Hylton, and David Stewart to make it to the final. On the other side of the ladder, Jeremy Teasley took out Malone, his brother Cameron, and Sweeney to face off against Claycomb in the final.

Spencer got the holeshot on Jeremy and had him at half-track, but then his motor let go, and Teasley pulled in front and took the win.

HTP Performance Grudge produced the biggest turnout of the year with a total of seventy-one entries. Miss Bud Light Lime, Tracy Robinson, moderated the class and pulled a few races together on Saturday night to entertain the fans.

Four riders entered to run the ‘Small Man Street Tire Shootout’ eighth-mile race. In round one Jeremy Teasley on ‘Grinch’ took out Gabe Oldfield on his GSXR. They were evenly matched off the tree, but ‘Grinch’ had the power to get the winlight.

In the next pair, Stewart ‘Lil Pluck’ Northan on ‘Bad Situation’ lost to Jamaruis Crawford on ‘Bud Light Lime-A-Rita’ after he lost fire as he was staged. Northan restarted his bike, but it was too late for him to catch Crawford.

In round two the ‘Grinch’ squeezed all the Lime out of Crawford off the tree to take to take the juice out of his pass as Teasley powered to the win on a hand clutch.

Some of the standout passes were Richard Gadson on ‘Super Freak’ and Darion ‘Nanu’ Payne taking a Harley Grudge race win.

Vance & Hines 4.60 had a full 32 bike field. With thirty three racers showing up to race, Ed Murphy had the bad luck of getting bumped out of the field with a 4.594 qualifier.

Richard Gadson was the number one qualifier with a 4.601, but Robert Hunnicutt, Ron Bonitatis, Terry Tompkins, and Ronald Procopio were hot on his heels with 4.60s as well.

In eliminations, Mike Chongris’ competitors were falling to redlights. Wilson Burkhead was the only competitor that did not fall under his red-light spell, so Chongris put the tree on him to make it to the final and go head to head with Wes Hawkins.

Despite Chongris taking a nice holeshot on Hawkins, it was Wes’s weekend to win as he powered his way to victory with a 4.604.

Wes and his team worked all week to get his bike ready in time for the weekend, boring cases on Tuesday, putting the motor back together on Wednesday and then putting it back into the bike on Thursday.

On Saturday, Ronald Procopio won the 4.60 Shootout, a $500 to enter, $4,000 winner take all race among eight riders that took place during qualifying. Tyler Cammock and Mike Thyen also have taken Shootout wins this year.

Dustin Lee qualified number one with a 5.62 in FBR Shop 5.60 and won five rounds to meet Jeremy Teasley in the final.

Teasley was putting his ‘Busa to work on Sunday as he hot lapped in the sportsman classes.

This win will keep Teasley number one spot in points.

Shinko Tires Crazy 8’s had a new number one qualifier for the season with Arlew Difeo, who ran an 8.880. Dustin Lee and Deshaye Manoney also ran 8.88’s in qualifying.

CJ Fair made it to his first XDA final, but he couldn’t get around Duane Jackson, who put the tree on him and got to the stripe first for his first Crazy 8’s win of the season.

Ryan Bonitatis qualified number one in Mickey Thompson Tires Top Sportsman for his third straight event. Jay Windsor would hold the number two qualifying spot for the third consecutive event as well. Both riders would win rounds, but neither would make it to the final.

Mac McAdams took the win in the final against James Farmer. Both riders cut good lights for a close side-by-side race until they got to the stripe, where McAdams would back off the throttle at the right moment to ensure he took the stripe without breaking out.

MPS Pro ET was fierce all day Saturday with 158 competitors cutting lights so tight that the redlight turned on fifty-two times in seven rounds of competition.

Bill Bair came into the final against the old Hillbilly Hustler himself, Jimmy Shifflett. Bair would once again put the tree on his competitor, and both would take the stripe breaking out of their dials. But Pennsylvania racer Bair got the win over Shifflett.

In Sunday Pro ET, Summer Nationals winner Dale Hamilton was ready for a repeat, and his performance round after round showed that he was all business this day. He would meet David Ashton on his ‘95 Suzuki in the final to run the very last pass of the weekend. Ashton had a slight advantage off the line, but it wasn’t enough, and the win went to Hamilton who ran dead on his dial.

In Saturday’s Brock’s Performance Street ET, Austin Bridge and Mike Schulz in harmony took out 117 competitors in seven rounds of competition before meeting in the final. Schulz cut a deadly .007 light but then ran into problems when his bike overheated and started spitting coolant out of the overflow, causing him to spin. This handed the win to Bridge.

In Sunday competition, two heavy hitters fell in round one but re-entered to make it back to the top and meet in the final round. Boo Brown and Dustin Lee would both go on to win six rounds until their Suzuki’s had to face-off. Lee cut the better light, but that didn’t come into play as problems for Brown at the sixty foot mark would send Lee to the winner’s circle.

For the sixth year in a row, the WPGC Bike Fest featured the “Paint The 1/4 Pink” program to help raise awareness and money for the “Bikers Against Breast Cancer” foundation. The all-female class of thirteen women raised $4,410 dollars for the foundation before going to battle on the racetrack.

Robin Procopio and Kim Dunham met in the final on Saturday night. Procopio cut a better light and would take the win when Dunham broke out on her dial, taking the stripe first with a 9.09 on a 9.11 dial.

Full qualifying and round-by-round results of the event

photos by Terrence Belton, story by XDA and Tim Hailey