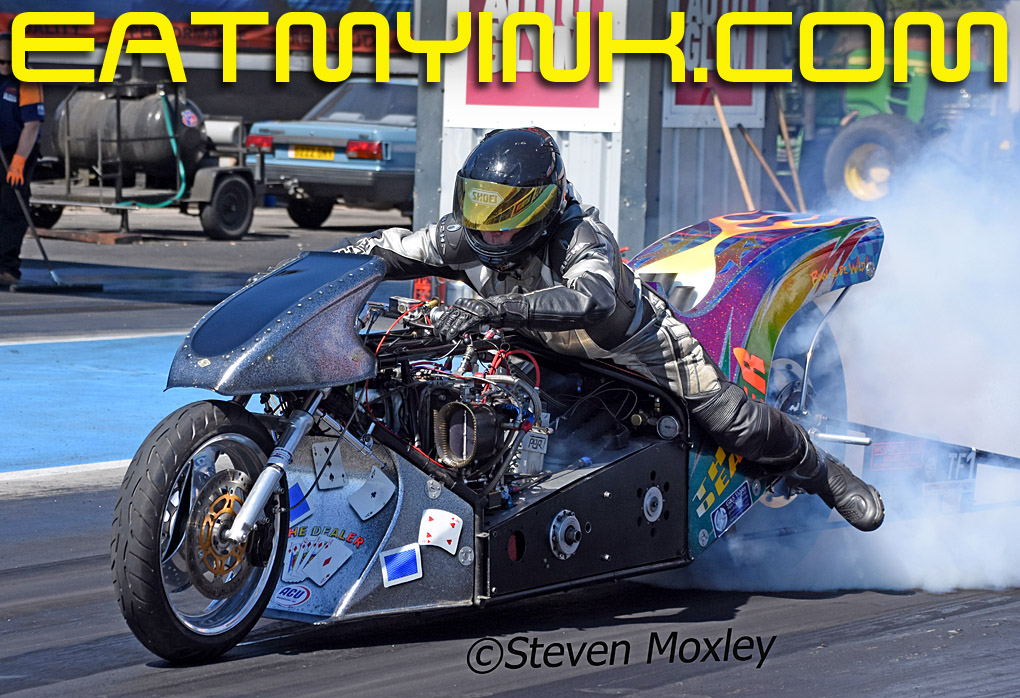 The Summernationals—round 2 of the ACU Championships—lived up to its name with hot, sunny, high humidity and temperatures into the high 80s. But that didn’t stop racers from setting records and recording personal bests as everyone continues to love Santa Pod’s new surface.

It was an emotional weekend for the multi-time and reigning ACU Top Fuel Bike champion Steve Woollatt. His brother Gary died a week before the event. When Steve first started drag racing, Gary was his crewman. Woollatt was the number one qualifier at this event with a 6.354 at 192.23 miles per hour.

Allan Davies has now fitted a third plate to his clutch and ran 7.713 at 187.37 mph on Saturday—his best figures to date. The speed was a career personal best for Davies. The team had a fuel issue and on Sunday’s qualifying session Davies ran 7.694-186.59.

Al Smith has been doing a lot of testing this year with the Phil Baimbridge three-cylinder fuel bike. In the second session, Smith lit the rear tyre and ran 12.876. The following session a cam belt and number one con-rod broke and Smith was out of the show.

Lorcan Parnell’s “Storm” team fitted a Hayabusa front end to stabilize the bike in the second eighth of the track. That resulted in stunning personal best figures of 6.676-218.24, which is under the ACU Funny Bike ET record and faster than the speed record.

Dale Leeks has rewired his bike over the winter, but still had an electrical issue. He changed the coil pick-ups and ran 7.073-181.42 and couldn’t get fifth gear.

Due to a low entry in Pro Stock Bike, reigning ACU champion Len Paget moved over to Funny Bike. This was his first appearance of the season. The front half of the frame is new and the bike also has new bodywork, Paget ran 7.523-173.72.

Thomas Joswig debuted a new bike—the ex-Filippos Papafilippou Funny Bike with the motor and transmission out of his own bike. Over the weekend, Joswig had clutch problems and ran 11.354-105.05.

Former Champion Dave Peters cracked a cylinder head and ran 12.522. Dave Buttery made a strong launch but then had a problem mid-track and ran 13.630.

Could the Pro Stock bike of Paget win the Funny Bike class? Paget pulled a redlight and Leeks won his first ACU event with a 7.013-188.92.

Both Tony Clark and Eric Jennes damaged their motors before Comp Bike qualifying even started. Six Dutch riders qualified for the sixteen-bike field.

Pro Stock bike rider Ian Burns has a striking new paint job, but broke the transmission in the pits and couldn’t get it fixed for qualifying.

Round two and Profas ran a personal best of 7.606-193.88, but couldn’t stop Collier reaching the semifinals. Batcheler redlit against Sandtke, who ran another p/b of 7.924-180.67. Mills beat Walker, who ran a p/b of 7.761. Bergelin got out the gate first, but slowed at mid-track against Van Den Belt, who took the winlight.

Collier reached the final after knocking out Sandtke. In the other semi, Mills had trouble down track and Van Den Belt was in his first ACU final.

Former champion Garry Bowe damaged another engine during testing and a mate of his brought the necessary parts down to the track on Friday night. The team decided to go back to last season’s set-up and ran 7.028 at 207.02 for number one spot.

Bowe had a bye run to open eliminations and ran 7.018. But an oil seal was worn and leaking, and just like that Bowe was out of the show.

Before the final, Venables did some clutch adjustment and then redlit against Balchin, who won his first event of 2018.

But it was round one winner David Bowe who won the event when Cordelle redlit.

Robinson was leading in the semifinal race against Wallace, but then broke at mid-track and Wallace took the winlight. Michel Tooren won the other semi.

Reigning champion Colin Millar ran the quickest ET for an Outlaw Anglia of 7.372 at a p/b speed of 184.37 in the final qualifying session. Jed Guy was the number two qualifier at 7.778. Paul Hensher’s 7.918 just edged Scott Crookston’s 7.934 for number three spot.

photos and story by Steven Moxley