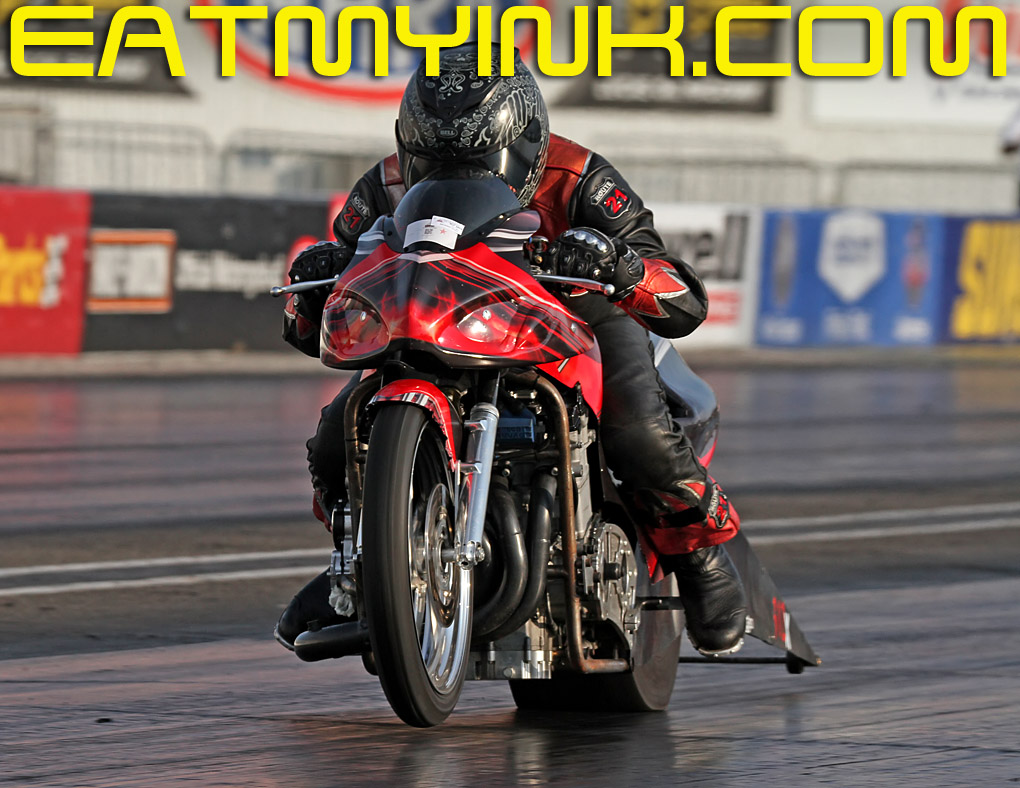 Big Money payouts continue to flow from the Midwest’s largest motorcycle drag racing series—NHDRO—into the hands of winning racers. This past weekend it was the bracket racers’ turn during the APE Summer Nationals at Lucas Oil Raceway near Indianapolis, Indiana.

On a day where the heat and humidity made it difficult for anyone in leathers and helmet to focus on racing even one bike, Iowa racer Bruce Damewood rode BOTH of his entries into the final of Saturday’s $5000-to-win MPS Pro ET race.

With one bike having a bye in one semifinal, Damewood still had to race Dalton’s father John “Spooky” Markham in the other semi. That’s right, two Markham’s and one Damewood accounted for four out of the last five bikes standing—Brett Engel being the other. But Spooky spooked himself, lighting the redeye and sending Damewood back to Iowa with NHDRO’s $5000 Big Check.

When it comes to racing multiple bikes in multiple classes—heat or no heat—few can match Deadly Dustin Lee. Taking over from Ben Knight as the hardest working man in motorcycle drag racing, Dustin faced a huge chore to get ready for the NHDRO race, with his bike and motor completely apart as he repaired the damage from a broken cam chain the previous weekend in Maryland. Then, of course, he was struck with a trailer tire blowout on his way to Indy.

But the outspoken Tennessean calmly sliced through the field and took home the big $3000 Kevin Dennis Insurance Street ET check. As the sun set beautifully in the west, both Lee and final round opponent Shaun Bizette lit two good, green lights before Lee took the stripe and the win aboard his Suzuki Hayabusa against Bizette’s Kawasaki ZX14.

Gateway Big Money winner Ron “Ju-Jitsu” Arnold didn’t win a Big Check this time around, but he did win two smaller ones. After qualifying number one in both M2.Shocks Crazy 8s and Millennium Trailers Super Comp, Arnold won the Crazy 8 final on his ‘Busa over redlighting Travis Klotz.

Arnold then had to face a man of destiny in the Penske Racing Shocks Street Fighter final. Vince Hileman crashed hard at the Dragway 42 event in May, and nearly sold his whole race program to pay for his recovery and the time away from work. But Hileman was back at the track this weekend, making grudge passes on his “Family Man” bike and going rounds on his crash-scarred sportsman ‘Busa.

Arnold left the starting line .003 ahead of Hileman in the Street Fighter final and both posted 9.505 ETs against the 9.50 index. It was Arnold’s scant advantage at the start that gave him the win and left Hileman’s comeback .003 of a second incomplete. Ke Ke Jones qualified number one.

Super Comp went to Ken Selner, who had to beat none other than Damewood in the final. After an .010 light on his “Lot Lizard” no-bar ZX14 vs. Damewood’s .035 on a dragbike, Selner also ran closer to the number with an 8.904 and took over the Super Comp points lead.

The Top Gas final also saw a no-bar bike win over a dragbike, this time with Jeremy Teasley taking the honor over Heath McQuinn. Lights were close, with Teasley .004 quicker and taking the double breakout win some 23 mph faster than McQuinn at the stripe.

Teasley survived another double breakout during an interesting quarterfinal match-up with Kounselor Kenny Schwartz. The Top Gas lawyer took the tree by a healthy margin after a lengthy burndown and seemed poised to take the win. But his fear of losing the stripe to Teasley’s top end terror left him running further under the 8.20 index than Jeremy, who’s now won three of four Top Gas races this year.

Sunday’s Street ET race went to Homer “Butch” England, whose scuffed up salvage ‘Busa was the right tool this time against Teasley, who was in yet another final.

Les Stimac hit the Quicktime Motorsports/Lindeman Performance Pro Ultra 4.60 number perfectly in Q1, securing his place as number one qualifier on Friday night. But a thrash to fix a broken transmission after the first round of eliminations left Stimac unable to make round 2 against Ohio winner Jimmy Muntain.

Muntain had an easy one in the final when Brunson Grothus redlit by -.003.

McIntosh/Grayson Machine & Fabrication Pro Street racers had to find a tune-up in what number one qualifier Gabe Frederick described as “The worst air Pro Street bikes have seen all year,” with a density altitude of 3500-4200 all weekend.

Frederick lost on a -.012 redlight to Atlanta winner Frankie Stotz and his Honda in what was otherwise a helluva semifinal, with Stotz running a 6.72 at 203 mph to Frederick’s 6.76 at 215.

The fact that Stotz was racing at all, let alone running at near 6.60 pace, was remarkable considering some mechanical carnage over the weekend. But Friday initially started very well.

“But we heard a slight tick in the early afternoon and didn’t think anything of it since we have a noisy top end. Before our first qualifier Friday night I noticed some header nuts were loose, so we figured that’s where the ticking was coming from. Tightened them up and the tick was louder, so right then we knew we had an issue in the top of the motor. We decided to skip the Friday qualifier and swap out motors, finishing up around 2 am.

“Saturday morning rolls around and we go out for the second qualifier. We go down the track but the bike felt awfully lazy considering how much boost we were running. Pulled the oil filter and found bearing material. So we had to swap out another motor, this time in between the second and third qualifier. We put the good ole 4.29 motor in it and went right down the track.”

Stotz need only putz down the track in the final as Ohio winner Luis Hornedo redlit after a strong weekend riding Ronnie Mitchell’s “Appolonia.”

The weekend also saw the continued reunion of the legendary grudge team of Keith “Shine” Dennis and MSP’s Joe Marasco.

Brian and Niki Welch especially thank Dianne and Jay Eshbach of American Performance Engineering, also known as APE, for their support of NHDRO and their sponsorship of the Summer Nationals. APE makes and distributes the absolute finest components in powersports performance at aperaceparts.com

NHDRO looks forward to welcoming everyone to the rescheduled CC Powersports Mid Season Nationals on September 7-9 at Ohio Valley Dragway near Louisville, Kentucky.