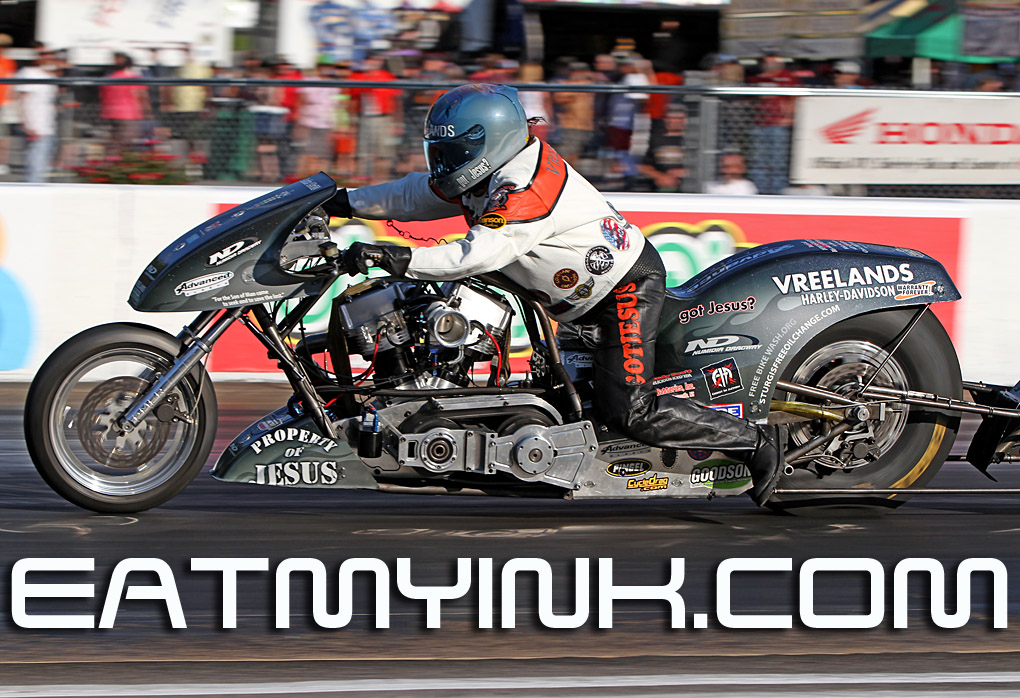 Here’s a report from the American Motorcycle Racing Association’s Michigan All-Harley Nationals at US 131 MotorSports Park in Martin, run July 28-29

Samson Exhaust sponsored Dennis “The Nitro Menace” Fisher hit the cones at the end of the track in the first round of Nitro Funny Bike qualifying, resulting in a couple of purple toes and a sense of urgency about Q2, where he qualified with third a 6.9. A 6.81 at 201 mph secured Fisher #1 in Q3.

“From my perspective, we won the race because we raced the track not the other competitors,” said Vreeland. “I knew we didn’t have the quickest bike when we qualified third, but if we made full passes we could win so that was our strategy and this time it worked.”

Dennis’ bike is a Weekend chassis, purchased through and completed at Hawaya Racing. It was originally built in 2011 for ASB Racing in Canada. Billy “Jack” Jackson purchased the bike in 2014 to race Top Fuel and Dennis bought the bike at the end of the 2016 season.

The engine Fisher used at Michigan is a 150 cubic inch, Derringer CL by Hawaya. The 150 cubic inch is to comply with the AMRA NFB rules which also dictate high gear only (no transmission), and a maximum rear tire width of 13”. These bikes use mechanical fuel injection and have a 2 stage centrifugal clutch.

Steve Matthews was winner Super Gas, receiving a set of Samson Exhaust pipes. “Icing on the cake,” Matthews said about his Samsons. “They will go on my Harley Road Glide.”

This was Matthews’ second win since he began racing four years ago. When asked what contributed to his win, Steve replied, “Everything worked out.” Although he was 7thout of 16 in the qualifiers Steve said, he adjusted shift points and RPMS which did the trick. “I was happy with my performance. No one is going to do this on their own.”

Steve said that last year he was #2 to Andy Horn, and that gave him a taste to win it. He said it often comes down to his buddy Andy and himself and he feels they are both at their best when they race each other.

Steve said it was his dad who gave him the fever to race when he was growing up, when used to watch his dad race cars. Although his dad tried to steer Steve away from motorcycles, Steve bought his first bike at age 19. Steve later went to races with his buddy, Jeff Workman and that is how he caught “the bug.”

He eventually bought one of the V-Rod Destroyer dragbikes built by Harley-Davidson. He gives a lot of credit to Vreeland’s H-D, who built the motor and states not only is his motor reliable, but Vreeland’s gave it a little more magic.

Steve also credits his local shop, Valley Racing of Beecher, Illinois. He says co-owner, Brian Conley, is a past champion in AMA Road Racing and champion in AMRA Drag Racing. He believes Brian is the best dyno tuner around.

He gives credit to all of those who he says has helped him become his best including Horn, Dennis Waldron, Jeff Workman, Tony Curtis and Rickey “Griz” Lee – just to name a few. Steve said this was a great race to win because there were neighbors, friends, family and his Dad in the stands cheering him on.

“A lot hard-work and dedication,” is what Williamson says brought him the win.

Jeremy is not new to drag racing and has been racing since he was young, but this was his first AMRA event ever. He took #1 in the qualifiers, won the first round, and took the bye into the finals. He went to the event early, on Friday night before the race, and did a few test runs. He then made some adjustments to the gear change, took a few more practice runs and was happy with his performance and time. He stuck to what he knew worked, and it worked for him.

Jeremy is very proud of his turbocharged 2005 Harley Twin Cam Road Glide. Even though he broke 3rdgear during the final, it was worth the win he said.

This was a new build and he was proud of the performance of his bagger, so much so that he was willing to share a few changes he made which he believes helped him win the race.

The rods, crank and cylinders are stock Harley. Cylinders are bored to 98 CI and use CP forged pistons. The stock heads have been ported and used 1.9”/1.61” valves. The clutch basket and transmission are stock, and since 3rdgear was broken, Jeremy may re-think the use of a stock tranny.

An MPS air-shifter kit is custom mounted for those lightning fast power shifts. An HPI 55mm throttle body feeds the 98” motor with all the fuel it can burn. The intercooled turbo kit was designed and fabricated by Jeremy. A Thundermax auto-tuner ECM handles the fuel mapping chores, and a chain conversion from the stock belt drive was necessary with the additional horsepower the turbo generated. And finally, Jeremy modified the swingarm to make chain adjustment manageable.

AMRA races next August 25-26 at the AMRA Liberty Nitro Nationals at Numidia Dragway in Numidia, PA.