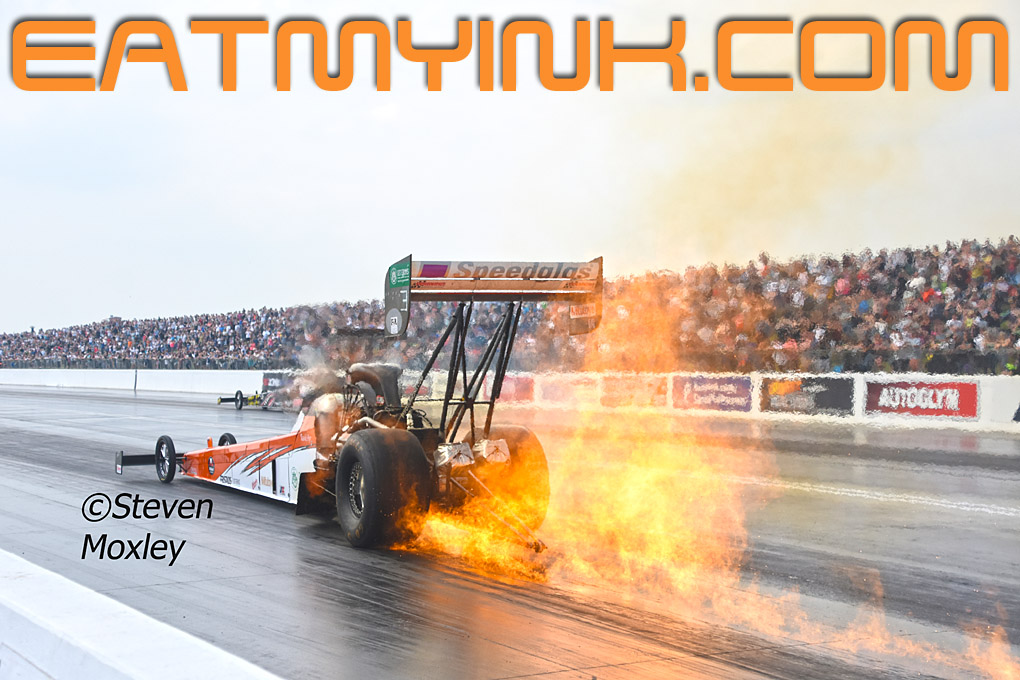 The opening round of the 2018 European Championships in both the FIA and FIM got off to a cracking start with glorious weather on the days of professional racing at Santa Pod Raceway’s famous Main Event.

The star of the Top Fuel Bike show was Filippos Papafilippou riding the ex-Ian King championship-winning Gulf bike. Fast Fil stunned everyone with a 6.099 at 214.08 miles per hour right out of the trailer—his first-ever pass on the bike. Then in the next session of qualifying ran a jaw-dropping 5.782-236.16.

Reigning European FIM Top Fuel Bike champion Rikard Gustafsson had a bearing problem on the crankshaft and had to change the short motor. Then in the final qualifying session Rikard ran his first five-second pass in Europe and first 250-plus mph in Europe with figures of 5.995-250.55.

Reigning ACU Top Fuel Bike champion Steve Woollatt was next with 6.367-195.46 with a clutch issue during qualifying.

Lorcan Parnell has a new billet cylinder block. The cylinder head has a copper head gasket and not power rings. Also, the gearing has been reduced and the bodywork has increased in length, resulting in a pass of 6.853-205.17.

Leeks came in as first alternate in round 1 of eliminations for Woollatt, who withdrew with two damaged pistons. Leeks put a holeshot on Richard, leading till the 1/8th mile when Dale had electrical issue and Eric took the winlight with a 7.274.

Borg had an issue on the start line and shut-off, leaving Parnell a bye run. Gustafsson set a new European Speed record with 250.45 (to back up his earlier run of 250.55) when he defeated Crane. There was no time and speed in the Papafilippou and Pettersson match, which saw Pettersson have traction issue at mid-track and Papafilippou taking the winlight.

This was Marcus Christiansen’s first visit to Santa Pod Raceway and after an easy pass he went back-to-back personal bests of 6.54 and 6.429 at 215.95 to lead the SuperTwins field.

Making a welcome return to the FIM Championship was Hans Olav Olstad, but it didn’t start well because his cam belt jumped a tooth. A new belt it resulted in a 6.725-211.83.

Reigning FIM SuperTwin Champion Martijn De Haas was looking for a clutch set-up to improve his 60 foot time and ran 6.877-206.29. Ronny Aasen was back in the saddle of the Zodiac bike with modified parts for their engine and in the final qualifying session ran 6.988-206.11.  Gert-Jan Laseur has fitted a new exhaust and bigger input shaft and ran a p/b of 7.561 at 173.09.

Reigning ACU Funny Bike Champion Allan Davies made his debut with a Puma V Twin after twenty years since his father Pete Davies constructed and built the machine. Last year Davies. did some RWYB meetings, but this is the first competition the bike has run at. Legendary Frank Brachtvogel—the only tuner to have won British titles in both four-cylinder and two-cylinder nitro classes—was on hand tuning the bike.  Davies had clutch issues and a non-working RacePak over the weekend and qualified with a 7.814-173.73 (best figures to date) and ran a p/b speed of 185.13.

Outside the show was the new bike of Christian Jager, which is the ex-Joachim (Acka) Riemer bike. The bike has a PRP 3200cc motor with a new type Bentec clutch and old type Bentec transmission, and testing a new German 2D Datalogger used in Moto GP. Jager’s best time was 9.181-149.14.

Christiansen had to shut off his motor due to a fluid leak on the start line for the final, giving a bye run to Olstad and a win on his return to the championship.

Kenneth Holmberg has not had much luck the past two years here at Santa Pod and once again Holmberg damaged another motor. A connecting rod—which had been upgraded—broke, but Holmberg still was the number one Pro Stock Bike qualifier with a 7.434-172.38.

has a Gen 2 clutch fitted for this season and just edged Martin Bishop for number two spot 7.471 at 173.73 to 7.475-151.57. Bishop threw a con-rod at the finishline. On his next pass the transmission let go and they had to make one transmission out of two.

Alex Hope has had a new front end fitted to the ex-Dave Beck bike, and was still having handling issues and ran 7.512-175.08. Mark Smith had a new Vortex cylinder head, had a valve drop and damaged a piston as well, and ran 9.415.

Holmberg redlit against Hope in the first semi-final and Bishop was a no-show, so Maurice had a bye run to his first FIM final.

Hope had a teeth clenching –0.006 redlight in the final giving Maurice his first FIM event win.

At this event, half the field of the twenty-four bikes entered ran personal bests over the five-day period (including test day).

Former champion Garry Bowe had an expensive weekend, damaging a motor and then damaging his transmission on his spare motor. Garry qualified third with a 7.081-205.34 but was out of the show.

Graham Dance’s number one motor started to smoke after testing so the spare motor was fitted and he ran 7.435-193.04.

Thomas Granica is now running a Gen 2 clutch and a new cylinder head and Garrett GTX (Total) turbocharger. But Granica hurt his only motor after a 7.480-186.65 and was out of the show.

Jemma Venables suffered boost problems during qualifying which caused wheelies, and was on the bump spot with a 7.638-185.14.

Venables turned the wick up and reset the European ET record to 6.928 to defeat Mead’s 7.331 in round 2. Haggblom ran another p/b of 7.580 to knock out Borg, who slowed at the 1000 ft mark. Lencses broke at mid-track against Lund, and Stubbins ended Gruber’s day.

Venables ran another 6 with  a 6.934 when he beat Haggblom in the semi. In the other semifinal, Stubbins eased off at ¾ track and Lund powered into the final.

Tell me if you’ve heard this before—the best Super Street Bike race of the day turned into the quickest and fastest side-by-side in Europe.  Lund pulled a perfect .000 reaction on the tree, but Venables powered around to take the winlight with a 6.934-210.00 to Mogens’ 7.038 at a p/b speed of 210.81.

The crowd and track crew were keen to see how the Top Fuel dragsters would cope with the all-new concrete surface.

Anita Makela ran 3.957-295.07. Micke Kagered had a huge fireball when a fuel connection broke and didn’t qualify for eliminations.

Makela ran 3.982 to put Jndia Erbacher back in the trailer in round one on raceday. Stig Neergaard got sideways in a pedalfest to knock out Micallef.

Funny Car driver Micke Larsson was making his first visit to Santa Pod and almost pulled a shock result when Timo Habermann had traction problems at mid-track. But Larsson could not get the winlight with a 7.717 to Habermann’s 6.800.

American John Smith was tuning both Kevin Kent’s and newcomer Kevin Chapman’s Funny Cars over the weekend. It was Kent who qualified in number one spot with a 4.529 at 265.62.

Kent beat Chapman in the semi-finals. Birgitte Bremnes ran personal best figures of 5.342-149.61, which was not enough to stop Steve Ashdown winning with a 5.112 in the other semi.

The final turned into a solo pass for Ashdown, who ran 5.111 to win the event.

With a stunning new paint job, Tony Betts was the Nostalgia Funny Car number one qualifier with personal best figures of 6.035-233.81. Bob Glassup was next in the Capri at 7.802 and Rob Elsom was completing his licence runs in his Firebird.

photos and story by Steven Moxley