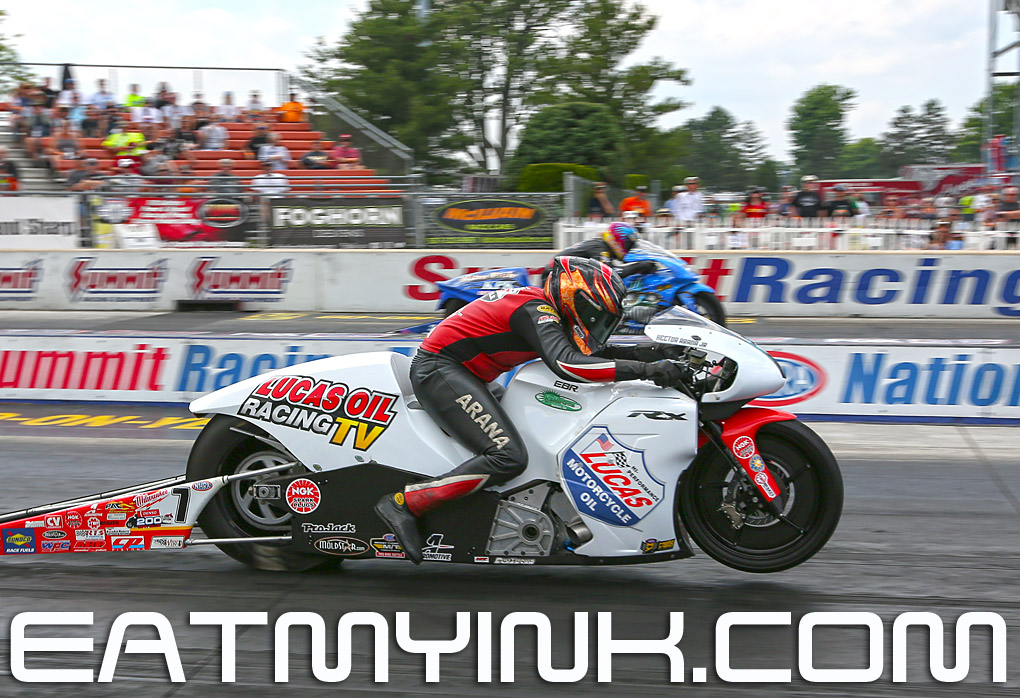 This was the first final of the year for Arana Jr. on his Lucas Oil EBR—the 201 mile per hour body that only he and his dad have.

“We have had a fast bike all the time, just been working on consistency and then when the bike was good I was making little errors,” said Arana Jr. “Dedication, hard work, and practicing to bring it all together. Finally got over some hurdles over here and now we should be back on track.”

Savoie beat Hector Jr’s dad on a holeshot in round 1, had a solo against a broken Matt Smith in round 2, and out-ran Karen Stoffer in the semi.

Getting a Suzuki to the final was a real achievement for Savoie and his tuner Tim Kulungian. “This was by far the most entertaining day of my drag racing career,” beamed Kulungian. “This is a tough race for us personally, and it’s always tough for the four cylinders.”

With Denver being just the start of NHRA’s western swing, Kulungian kept his tune-ups conservative, and qualifying did not live up to his expectations with Savoie 12th and Tonglet 7th. “I told everybody to just enjoy the scenery this weekend after qualifying,” laughed Kulungian.

But Tim was very pleased with how surprisingly positive that raceday turned out. “I’m proud of these guys and very happy to be racing with them.

John Force raced to his 149th career Funny Car victory and first in over a year. Force was in his 13th career final round at Bandimere and was pitted against Ron Capps. In his Peak Chevrolet Camaro SS, Force was able to leave the line ahead of Capps for a winning pass of pass of 4.075-seconds at 315.42 mph to the losing run of 4.067 at 308.71. This is his eight win at the facility.

“I found myself with all of the crashes at probably the lowest I’ve been, probably worse than ’05 when I crashed and was fighting to get back,” said Force. “The fire is back in me, I’m fighting.”

Force became the winningest Funny Car winner at Bandimere and this is his first win at the facility since 2016. He was the No. 5 qualifier and drew a tough first round opponent in Matt Hagan. In a classic John Force Racing versus Don Schumacher Racing match-up, Force took out Hagan with a strong 4.158 second run at 285.77 mph as Hagan slowed to 4.279 seconds at 265.69 mph. The win was Force’s 1,300 round win of his illustrious career.

The second round saw Force squaring off with a driver he has raced over 100 times, Cruz Pedregon. The rivals both know each other’s tricks and habits but it was Force who got the better of the two-time Funny Car champ beating him off the line with a stellar .037 reaction time and getting a hole shot win with a 4.139 second pass to Pedregon’s quicker 4.137-seconds. It was Force’s start that secured the win at the finish.

In the semifinal he faced one of his toughest opponents all season, daughter Courtney Force. She was the No. 1 qualifier and also the points leader. In addition, she held a 4-0 record against him in their head to head matchups this season.

It was a coin flip off the starting line and the elder Force pulled away past half track for the win and a chance to pick up his first victory since the Gatornationals in 2017, a span of 34 races.

The final round was another epic battle between Force, the winningest driver in Funny Car history, and Ron Capps, the second winningest driver. It was Force again taking a starting line advantage with another .037 reaction time and getting the win over Capps 4.075 to 4.067.

“I had to beat a lot of great racers today. Hagan, Cruz, Capps. I love them all. My fire was in me,” Force said. “I am fighting and I got tired of hearing me snivel to myself. My wife doesn’t even want to talk to me. I am working through rehab to get out here to win races. I don’t know why I won this race but I have a lot more fight in my belly.”

“I have to thank the fans and all the sponsors all over my car PEAK, Auto Club, Advance Auto, Monster, Carquest and Chevrolet,” Force said. “I really have to thank Jon Schaffer, my crew chief, and Ronnie Thompson. There are also guys like Jimmy Prock, Brian Corradi and Daniel Hood and, as a team, we are starting to put it back together.”

Points leader Courtney Force raced her Advance Auto Parts Chevrolet Camaro SS Funny Car to the semifinals for the fourth time this season. Force was consistent throughout qualifying and eliminations. Coming in as the No. 1 qualifier off a stellar 3.94-second pass from Saturday night, Force defeated Terry Haddock with a 4.089 pass in the heat of the day and then handed veteran Tim Wilkerson a second-round exit with a 4.089 pass before having to face her father and eventual event winner, John Force in the semifinals.

“It was a good weekend for the Advance Auto Parts team, clinching a spot (in the Countdown to the Championship) knowing we don’t have to worry about trying to fight to get into that top 10 by Indy. We can just go out there and focus on doing the best job that we can to perform and to win races. I think we definitely had a pretty good comeback from a race where we struggled in qualifying and on race day. To come out here and to be quickest three of the four (qualifying) sessions I think is incredible. It says a lot about my team and what we’ve got going on. For all of our Chevys, they’ve been strong all weekend here. We were obviously hoping for a longer day. (In the semifinals) the car got a little to the outside and dropped a cylinder. I tried to pedal it but he had already turned on that winlight.”

John Force Racing President Robert Hight took his Auto Club of Southern California Chevrolet Camaro SS Funny Car to the semifinals at the Mile-High Nationals. Hight, the No. 2 qualifier, raced passed Jeff Diehl who red lit and out ran veteran Tommy Johnson Jr. with a 4.052-second pass at 318.09 mph before reaching the semifinals.

“We had a great race car today. (Crew chief) Jimmy (Prock) got it figured out just in time and we won some rounds,” Hight said. “I would have liked to have lined up against John in the final but we will get our stuff together and get ready for Sonoma. It was a lot of fun to have Autumn here today. I feel like we had the race car to win this race and it just didn’t work out. This is a tough sport and I am going to put this race behind me and focus on the next one.”

Leah Pritchett dominated the Top Fuel category during the course of the weekend en route to her second win of the season and the seventh in her career. Piloting her Dodge Mopar 1320 dragster she was No. 1 qualifier for the second consecutive event and the 10th time in her career.

The Mopar Dodge 1320 driver opened eliminations with a steady 3.857-second at 322.81-mph lap to outrun Terry Totten, and then unleashed the “Angry Bee” to the tune of 3.806, the quickest of the round, to send home Scott Palmer. Pritchett ran a 3.826 in the semifinals, matched by her opponent Clay Millican’s identical 3.826 E.T., but Pritchett’s sharper 0.043-second reaction time earned her the starting line advantage and the round win.

In her second consecutive final-round appearance at Denver and 11th overall of her career, Pritchett trailed briefly against Doug Kalitta but quickly put her Mopar Dodge 1320 in the lead and never looked back, laying down a HEMI-powered 3.831-second at 316.45-mph pass to Kalitta’s losing 3.852-second effort.

“Our crew has really impressed, attitude of gratitude, as high as the altitude here,” said Pritchett following the victory. “They chipped away at it and didn’t let themselves get down earlier this year when we were in a slump and they didn’t let me get myself down in a slump either. I always have my confidence in them and they have their confidence in me and this weekend we pulled it all together.

“We have some incredible, stiff competition but, from Friday to Saturday to today, nobody had a better racecar because, in my opinion, nobody has a better team. To do it in this fashion, it’s a couple of ways – this is the Dodge Mile-High Nationals powered by Mopar and Pennzoil, and we’re the 1320 Scat Pak R/T car and, on top of that, I was here in 1997 and got my very first Wally. I didn’t win the national championship in a Junior Dragster but my team did. And it is no different today – this team got me my first Wally here on the mountain. To me, this win is bigger than winning the U.S. Nationals. Winning on the mountain is doing something. The glory goes to God, it goes to Don Schumacher for giving me an incredible team, and everybody at Don Schumacher Racing who builds these racecars for giving me something so safe, so solid. There’s a reason I always dreamed of driving for Don Schumacher Racing and this is it.”

After jumping into the No. 2 position on the final qualifying pass on Saturday night, Brittany Force was up in smoke mid track and tried to pedal her way through the pass but didn’t have enough to get around Jim Maroney in the first round. The Carquest Brakes Monster Energy dragster coasted to a 5.524-second pass. It is the first time in her career that Force has had a first round exit at Bandimere Speedway.

“It’s definitely tough leaving Denver with a first-round loss. Our team has been struggling. We can’t seem to go rounds. One thing I’ve learned from Alan Johnson is right now we’re getting ready for the Countdown. As long as we stay in that top 10, that’s the most important thing. And then we have to be ready and bring it when the Countdown begins, and then we have six races in the Countdown to move up as high as we can. That’s what we did last year. When we do go rounds and bring home another win, it will make all these rough days worth it.”

In Pro Stock Car, Greg Anderson raced to his first win of the year, third at the facility and the 91st in his career when he defeated his teammate Jason Line in the finals. Anderson’s 6.943 at 196.53 pass in his Summit Racing Equipment Chevy Camaro to the losing run of 6.947 at 196.19 gave him the victory to snap his winless streak. Anderson also retook the points lead in the category.

“We have had a heck of a battle this year, we have had great running cars but we have made mistakes on Sunday and haven’t been able to close the deal,” said Anderson. “The class is so tough right now, it is so hard to win. The bottom line is we haven’t put forth our best effort on Sunday, we haven’t lost giving it our best shot and today we did.”