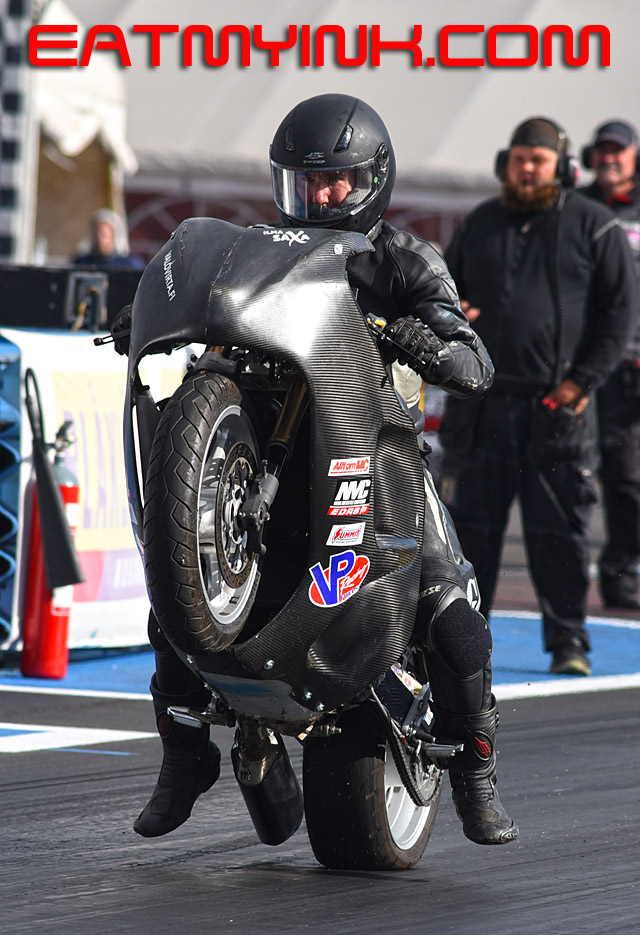 “Let’s go out with a bang,” was the slogan for the 2018 FHRA Nitro Nationals, the final drag race at Finland’s legendary and doomed Alastaro Circuit.

The Nitro Nationals are always special, but this time it was even more special as it was the last time that Alastaro Circuit was host to the EDRS Pro Nordic MC. From 2019 the new track in Kauhava will be the new home for Finnish drag racing and the Nitro Nationals. To be sure that Alastaro will not be forgotten, the track crew did their very best to offer the riders the best possible track conditions and—looking at the elapsed times—they succeeded.

The Finnish riders in the EDRS Pro Nordic Motorcycle Championship took good notice of these words as they gave the home crowd plenty to cheer for. With Timo Savolainen, Toni Suokas and Jenni Pekkarinen—three of the six categories were won by riders from Finland. In Super Twin Motorcycle and Super Street Bike, Marcus Christiansen (Denmark) and Mathias Bohlin (Sweden) took the wins, but there were Finnish riders on the podium as well. In Top Fuel Motorcycle there was no Finnish competitor, and if there had been one, it would have been almost impossible to prevent Rikard Gustafsson from claiming his second victory of the EDRS Pro Nordic MC season.

All qualifying and eliminations results were published on the Dragracingeurope.eu and FHRA websites during the event. In this article we look back at the highlights and other interesting things that happened during the second round of the EDRS Pro Nordic Motorcycle Championship.

Friday qualifying had to be reduced to one run after the rain delayed the start. In Super Twin Motorcycle there were some discussions after qualifying about a 16 or 8-bike field, and in a riders meeting it was decided that there would be a fourth qualifying run on Sunday morning, setting the field for an 8-bike elimination ladder.

In the first run on Friday, Marcus Christiansen stormed to a great 6.41 second pass to claim the number one qualifying position, and that remained unchanged on Sunday morning. But behind the young Danish rider there were some major changes after the final qualifying run.

Jaska Salakari jumped from outside the ladder into the number two position with 6.49 seconds and the same was true for Harri Piensalmi, who suddenly was in seventh position. Samu Kemppainen, until Saturday evening the number two qualifier with 6.61 seconds, dropped one spot and was third, with Greger Johansson after an improvement on Sunday morning in fourth position (7.27 seconds). Svein Olaf Rolfstad, Anders Hörnström and Lasse Leponiemi all dropped two places and were fifth, sixth and eight respectively. Major victims of that last run were Torsti Kettula and Kristin Hegre as they were qualified after three runs, but bumped from the ladder.

But due to some problems, Salakari and Rolfstad had to withdraw from eliminations and Hegre and the number twelve qualifier, Teemu Kettula, stepped in as alternates.

Chistiansen proved his great form and after a storming 6.38 seconds win in the first round over Leponiemi, a 6.81-second run was enough to defeat Johansson and advance to the final.

On the other side of the ladder Kemppainen defeated Hörnström in the first round and took an unbelievable holeshot win over Piensalmi in the semifinals. Piensalmi recorded 7.02 seconds while Kemppainen struggled with 7.10 seconds, but the former champion’s reaction time was so much better that he crossed the finish line first and advanced to the final.

In a great final, Christiansen proved his consistency again by recording 6.49 seconds, and that was too quick for Kemppainen (6.86 seconds).

Tierp winner Vesa Lipponen couldn’t compete at Alastaro as his bike was not ready, so Tierp runner-up and Alastaro winner Christiansen is the new leader at the halfway point of the season. Kemppainen is the number two, 65 points behind the leader, with Leponiemi in third position.

In Super Street Bike qualifying, Mathias Bohlin proved that his win at Tierp was not a nine days’ wonder as the Swede reset his personal best several times to claim the number one qualifying position with a stunning 7.07 seconds.

In his final run Vesa Ruhanen improved to 7.32 seconds to secure the number two spot, while Alex Hope jumped into the number three position with 7.33 seconds.

Reigning champion Mogens Lund was in second position after the first run, but as the Dane had to deal with traction problems and couldn’t improve on his Friday performance, he was only fourth with 7.34 seconds. Robert Nilsson made it to the number five position with 7.43 seconds.

In the first round of eliminations there was a major upset when Lund had a .472 reaction time and was defeated on a holeshot by number eleven qualifier Ida Zetterström. In an all-female quarter final Zetterström also won over Bianca Nilsson and advanced to the semifinals.

Another interesting quarterfinal match-up was the one between the brothers Alex and Mark Hope, won by CDB Asylum rider Alex who then had to face Ruhanen in the semifinals.

Bohlin and Ruhanen proved their qualifying form in eliminations, and where the Swede was both quick and consistent, the Finn even improved on his qualifying performance. After a 7.088-second win in the first round and a 7.13-second bye run in the quarterfinal, Bohlin stepped up to 7.082 seconds in the semifinal to defeat Zetterström.

Ruhanen made some major steps with a 7.09-second run in the first round, 7.12 seconds in the quarterfinals and a winning 7.10 seconds in the semifinals against Alex Hope. Thus the numbers one and two qualifiers had to face each other in the final. Ruhanen had a better start, but with an elapsed time of 7.10 seconds Bohlin took the win over the home favourite.

With two wins out of two races and still undefeated, Bohlin is also leading the championship. Ruhanen is second, but already 83 points behind. Alex Hope is in third position and reigning champion Lund fourth, 105 points behind Bohlin.

With four riders from four different countries, Super Street Bike has the most international top four of all categories.

Top Fuel Motorcycle was dominated by Rikard “Balls Deep” Gustafsson. The Swedish winner of the first round at Tierp stormed to a great 6.04 seconds in qualifying.

As his only competitor at Alastaro, Thomas Pettersson, suffered serious engine damage in qualifying and had to withdraw from eliminations, Gustafsson only had to make one run on Sunday to claim the victory.

With two wins at his credit, Gustafsson is also leading the championship, with Pettersson in second position and Peter Andersson third.

That you don’t have to be the quickest rider to score a win was once again proven in Pro Stock Motorcycle.

Thomas Lysebraate Olsen from Norway was the quickest rider in qualifying at 7.12 seconds, with Timo Savolainen in second position, as the FHRA Nitro Nationals was the Finn’s first race and he had to sort out the setup of his bike.

Olsen and Savolainen had to face each other three times on Sunday, and the winner of two races would take the Alastaro win. Olsen won the first race, but suffered a problem with his front shock in the burnout of the second race and had to withdraw from competition. Savolainen completed the last two bye runs and with two wins at his credit, the Finn took the Alastaro victory.

In the championship standing reigning champion and Tierp winner Olsen is in the lead, with Savolainen in second position and Kenneth Holmberg third.

In Super Comp Bike, Kim Oksanen used one of the last qualifying runs to claim the number one position with 8.520 seconds, with Friday leader Jami Oksanen in second position.

But in eliminations, the number four qualifier, advanced to the final after defeating the numbers one and three qualifiers, Oksanen and Anders Gerdtsson.

On the other side of the ladder, Hannu Koskela surprised the number two qualifier Jami Oksanen in the semifinals and was in the final as well.

In an all-Finnish final Koskela recorded 8.47 seconds—too quick for the 8.5-second index category, handing the win to Suokas.

In the championship, Tierp runner-up Anders Gerdtsson is the new leader with Peter Östlund in second position and Suokas third.

The first round of eliminations was filled with upsets as Malinen, Reinola and number four qualifier Jami Oksanen were all defeated. After defeating Ellen Ødegaard in the semifinal, Teemu Kekola advanced to the final where he had to face Jenni Pekkarinen.

After a 9.51-second run in the semifinals, the 22-year-old Pekkarinen proved her consistency with 9.61 seconds to defeat Kekola in the second all-Finnish final of the day.

In the championship Tierp runner-up Ødegaard is the new leader, with Pekkarinen only two points behind in second position. Jami Oksanen is third, with Reinola in fourth position at the halfway point of the season. 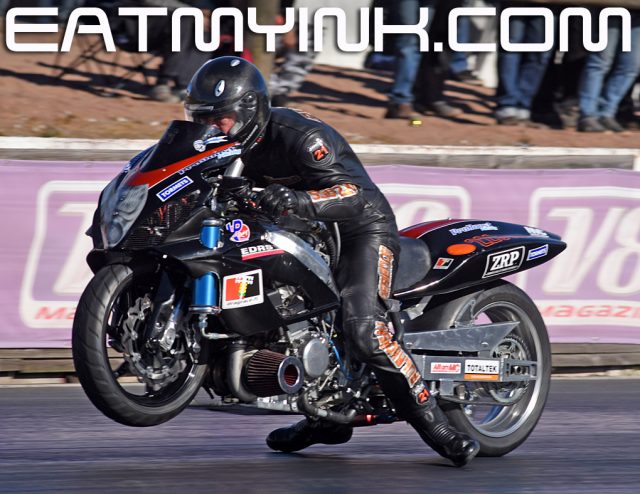 story and photos courtesy of Remco Scheelings except where noted