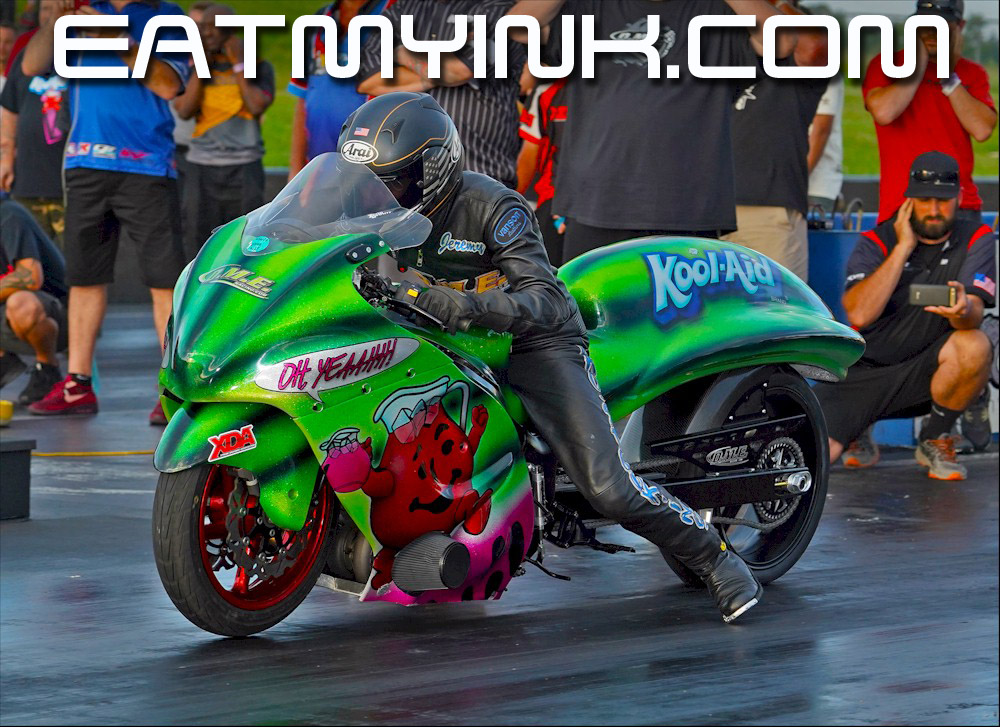 Teasley also won the $5000 HTP Performance Grudge Pro Extreme race on DME’s Kool-Aid against Chris Moore on Cash is King. It was a battle between what are widely regarded as the two quickest turbo grudge ‘Busas on the planet. Moore and Cash is King came into the race as winners of NHDRO’s $13,000 grudge race in Atlanta.

Lil’ Rich followed that up with the Vance & Hines 4.60 win on the “Crusher” over Tim Shelton in the final. Alan Fields qualified #1 with a 4.602

John Fernandez won the Pro Nitrous grudge race on Under the Influence against Teasley on Grave Digger.

On Sunday night when sportman finals were running, a storm came in and ended the event with four classes not completed.

The FBR Shop 5.60 class was one of the four categories that didn’t get to finish when the rain came in. Number one qualifier Duane Jackson took a second-round loss to Stephen Knight who was one of the five racers still left in the class. Boo Brown, Shayne Proctor, Spencer Claycomb and Freddy Frazier also still had a chance for a victory before mother nature broke loose on the track. But these sportsmen will be back in Maryland next month ready for another attempt at victory.

Shinko Tires Crazy 8’s class left several heavy hitters dismayed over losing the chance for a win. Teasley, Claycomb, and Fred Reid were still standing after the quarterfinal round. Teasley was about to get a bye in the semi-final to ensure himself a final round finish against Claycomb or Reid. They will have to settle for another chance at a win next month at the WPGC Bike Fest.

In Brock’s Performance Street ET, Dana Mack was the man to beat on Saturday. Not only did Mack win Street ET, but he also took the runner-up finish in MPS Pro ET giving him 14 round wins in two classes. Mack faced off in the final against Pablo Gonzalez who was always the first bike in the lanes when the class was called. Unfortunately for team Puerto Rico, Gonzalez cut his first bad light of the day against Mack, giving away the starting line advantage and the win.

This was Dana Mack’s first Street ET win, and also his first-time racing at VMP. On Sunday Gonzalez went on to win four rounds of Pro ET. Both Mack and Gonzalez will be back in August ready to battle it out for another win.

Big Dale Hamilton is always a fierce competitor and this year is no exception with two wins under his belt before coming into the MTC Summer Nationals. In MPS Racing Pro ET Hamilton proved you should never back down. After taking a first-round loss to Fred Reid, he bought back in and went on to win 7 rounds of competition to take the win over Mack. With that $40 gamble, Hamilton earned himself a $3,000 payday on Saturday. Hamilton had also won 4 rounds of competition on Sunday before the rain came in and ended the event.

photos by Terrence Belton, story by XDA and Tim Hailey