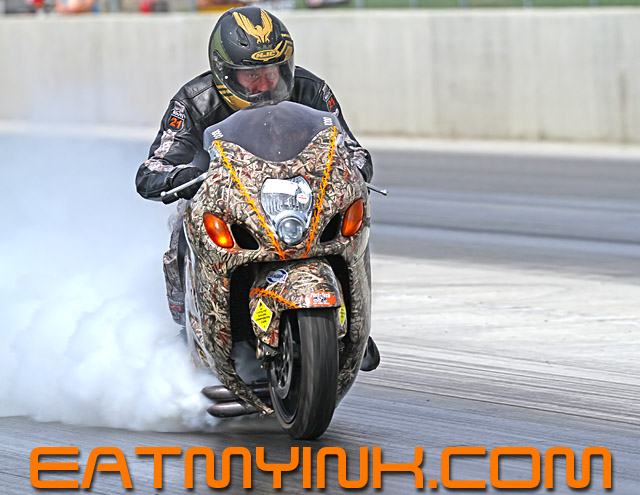 A massive oildown (An oil filter O-ring failure sent Chad Fleener drifting down track and put the event into a 2 hour clean-up) delayed the finish of NHDRO’s Liguori Drag Racing May Bike Fest right into a line of advancing thunderstorms that washed out the last few pairs of competition. It was a dramatic ending to an otherwise beautiful weekend of motorcycle drag racing as the Midwest’s largest series made its first stop at historic, newly renovated Dragway 42 in West Salem, Ohio on May 4-6.

Some classes were able to complete their ladder, including Pro Open. The final pitted the nearly identical team bikes of Perry Paugh and Mike Chongris. The two Cleveland-based, beautifully prepared, turbocharged Suzuki Hayabusa funnybikes were the class of the field, with team owner Paugh qualifying number one.

With rain literally on the horizon, Chongris felt a problem in the clutch during his burnout for the final and let Paugh take a solo for his first NHDRO win. “I didn’t want to stop on track and delay the race,” said Chongris. “I didn’t want to be ‘That guy.’”

Quicktime Motorsports/Lindeman Performance Pro Ultra 4.60 also ran their final, with Jimmy Muntain taking the win—again over Chongris, and again the first NHDRO win for Muntain—who also qualified number one with a 4.602. The final was an excellent race, with Muntain taking the tree with a .006 light and winning with a 4.62 to Chongris’ 4.64. “I had a good time there,” said Muntain, who plans on attending more NHDRO events.

The world’s quickest street-legal bikes—McIntosh/Grayson Machine and Fabrication Pro Street—struggled with a freshly ground and lightly rubbered-in track. This was the first event held on a surface that was ground just three weeks previous, and the turbocharged, 700 horsepower bikes struggled to find the right tune-up to channel that power through their street tires.

Number one qualifier Doug Gall solved the riddle best on Saturday, but it was Luis Hornedo and Quicktime Motorsports’ Brad Christian that reached the final on Sunday. “I went back to a tune-up I ran at Byron in like 2006,” said Hornedo’s bike owner/tuner Ronnie Mitchell.

It’s the first Pro Street final for both riders, but it will have to be run at the next NHDRO race at Gateway Motorsports Park just outside of St. Louis on June 8-10. “I can’t wait!” said Hornedo.

Craig Adams qualified number one in Top Gas with an8.206, but was out in round 2. There were three bikes still standing when the rain came, with Jeremy Teasley holding a bye to the final. Mike Hall and Dustin “Biscuits” Lee will vie for the right to meet Teasley for the win in June.

Teasley qualified number one in Millennium Trailers Super Comp with an 8.905, but lost to Scott Sheppeard in round 1. Sheppeard beat Lee in the semis and will face Ken Selner in the final when this race is decided at Gateway.

Jeremy’s not the only Teasley to have a successful weekend, as younger brother Cameron has a bye to the Penske Racing Shocks Street Fighter final. Cameron will face either Kevin Adams or Jeff Hall. Former Top Gas champ Greg Mallet qualified number one with a 9.503.

Vince “Family Man” Hileman made the most dramatic Street Fighter pass of the weekend, crashing hard in the shutdown area. Hileman ground himself up pretty good with a broken left ankle, right foot, and an elbow along with many serious scrapes, but will live to race another day.

M2.Shocks Crazy 8s still has the semis to run, with Selner facing Tylan Beckelheimer on one side of the ladder and Tom Cooper facing Brian Babiak on the other. Number one qualifier Murray Lonsbary (8.888) lost to Kevin Adams in the third round.

Lee faces Jerome Gordon for a bye to the final Sunday Street ET final when racing resumes at Gateway, as five riders remain standing. Ted Thompson races Beckelheimer for a chance to race Cameron Teasley, who has the bye to the semi.

Pro ET has three bikes left: Randy King will race Doug Fisher, with the winner to race Jeremy Hicks (on Gary Goodwin’s bike) in the final.

Brian and Niki Welch look forward to welcoming the NHDRO family back to Gateway in June to wrap up the Liguori Drag Racing May Bike Fest and kick off the Kenneth R. Schwartz attorney at law Motorcycle Madness.

The Midwest’s largest motorcycle drag racing series—NHDRO—returns to its heartland base May 4-6 for the Liguori Drag Racing May Bike Fest at Dragway 42 in West Salem, Ohio.

It’s the first time that NHDRO has raced at the historic, newly renovated track, and the Buckeye State has long been known as the home of more dragbikes than any state in the USA. So expect packed staging lanes of baller ET, index and streetbike racers going mano y mano for NHDRO’s big victory checks.

At the top of the heap are the world’s quickest street-legal bikes of McIntosh/Grayson Machine and Fabrication Pro Street. Second generation Pro Street racer Frankie Stotz has entered two Pro Street races on his little 1000cc Honda this year and won them both, including NHDRO’s 190hookup.com Season Opener. Most recently, the Chicago area racer ran his first 6.60 and moved up the G.O.A.T. list with a 6.69.

But the true trunk of the NHDRO family tree is its sportsman racers, and no sportsman was more successful at the opener than double winner Jeremy England. He won Top Gas and Penske Racing Shocks Street Fighter last time out, but will be doubly dangerous racing in his home state this weekend.

Millennium Trailers Super Comp features a rowdy mix of wheelie bar and no-bar bikes racing the quarter mile with an 8.90 index. Sportsman stars will be taking the tree and hitting the number.

M2.Shocks Crazy 8s drops that number only 2/100ths but requires a no-bar bike to do it with. Opener winner Dustin Lee, Stephen “The Right” Knight, Travis Klotz and more will all be aiming for Crazy 8s glory.

MPS Pro ET and Kevin Dennis Insurance Street ET will feature many of the racers already touted and more, including Garreth Sheppeard and Doug Fisher.

And never forget the Heavy Hitters and Performance Racing Products Grudge, racing deep into the night on Saturday with the Midwest’s hottest grudge bikes, including Hileman’s “Family Man.”

NHDRO is working hard to make sure you’ll be able to watch your Cavaliers right on the starting line during Saturday night’s grudge session.

The weekend kicks off Friday night at 8:00 pm sharp with a round of qualifying and the biggest little race of the weekend—the Total Racing Motorsports Grom race.

Brian and Niki Welch look forward to welcoming the NHDRO family to what promises to be one of the best tracks on the circuit.