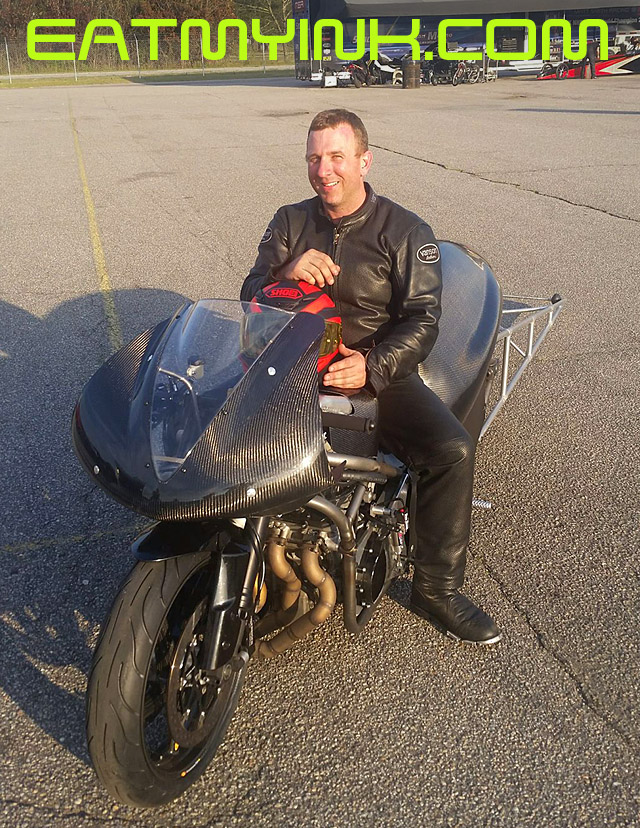 With Ehren Litten getting quickly up to speed on a totally unfamiliar combination just assembled over the weekend, teammate Rodney Williford finally felt comfortable to go quick on the ex-Mark Rendeluk nitrous bike—a 4.06!

Ehren Litten’s Monday testing was stymied by faulty shift linkage on his brand new, Pete Browne chassis, assembled staring on Friday, turbo Hayabusa Pro Extreme Motorcycle. But after an overnight drive back to the shop from Darlington and an all night grind in the shop, Ehren’s back at the track and made two hits so far. See his promising ticket above.

UPDATE: Williford into the 4.0s

And now the video:

Rodney ran the bike out to a 4.16 on his second lap with what Mark Rendeluk calls a “baby tune-up.”

Rendeluk is boiling over with praise for Williford. “I have never seen a guy jump on a bar bike for the first time and ride it as well as Rodney has,” said Mark, insisting that I print his words. “Five passes and all of them consistent! He is a great rider and will only continue to improve!”

Here’s Rodney’s most recent timeslip, the 60 foot time reflecting that the track was going away as the day progressed.

Williford Racing is hitting the track at Darlington today and tomorrow, testing two Pro Extreme Motorcycles for Rodney Williford and Ehren Litten to race this year at limited events. “Neither Ehren nor Rodney have ridden a bike with wheelie bars,” said Williford Racing fabricator and spokesman John Gover.

“We have built a turbo big tire bar bike for Ehren to ride. We picked up the bare chassis from Pete Browne on Friday and burnt the midnight oil for two and a half days completing the bike. I made the motorplate, bearing support, controls, etc. inhouse at Williford Racing.

“It’s as fresh of a build as they come. The bare chassis without any mounting provisions or real hardware was unloaded from Ehren’s trailer at 10 am Friday morning.”

And early Monday morning, Ehren’s son Brandon was loading it back on the trailer as a race-ready motorcycle.

The turbo bike is a Hayabusa platform, the nitrous bike is the GS formerly and raced owned by multi-time Man Cup Pro Open champ Mark Rendeluk.

“If all—or at least a little—goes well, the bikes will be racing at the PDRA season opener this weekend in Galot.”

Eatmyink will keep you posted on Williford Racing’s testing results.