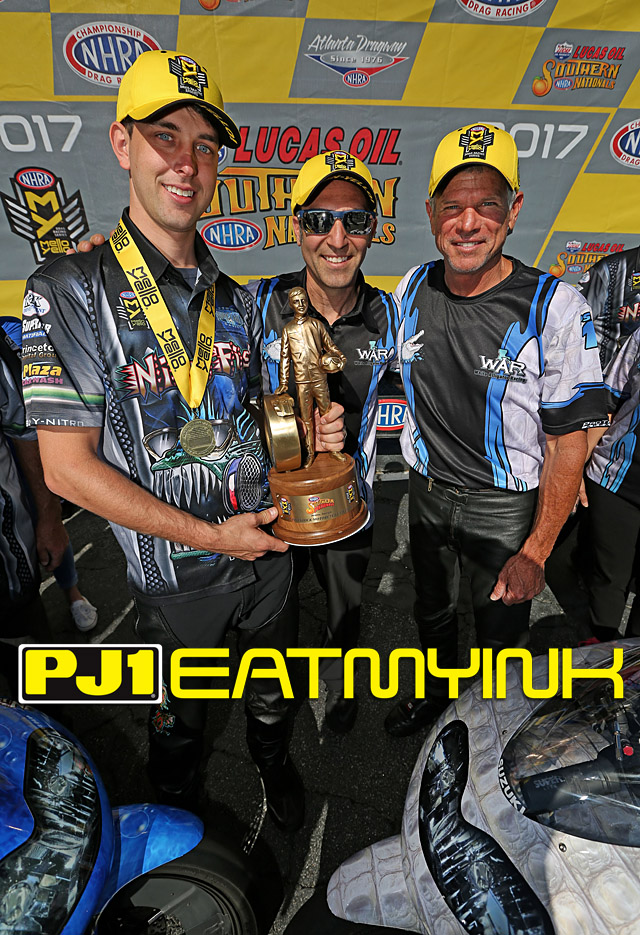 No one will talk about it—not Jerry Savoie, not Tim Kulungian, not LE Tonglet—but I’m here to tell you that Tonglet will be back in the seat he practically made his own with six Pro Stock Motorcycle (PSM) wins last season: White Alligator Racing’s second Suzuki. Why do I say that? Because it only makes sense.

Signs were present very early that the Steve Johnson/WAR partnership wasn’t going well. The announcement of that pairing seemed to be delayed for a sponsorship press release, but that release never came. A week before the PSM season opener at the NHRA Gatornationals, I heard Johnson’s own Suzuki motors were back at Vance & Hines for freshening.

When Johnson wheeled the bike into the Gainesville staging lanes with a plain white tail section and no sponsorship to speak of, I was like “How is this gonna work?” The WAR Suzuki is a high dollar rental and Johnson is famous for successfully running a low buck program. He would need a major backer to be a part of the WAR team and he didn’t seem to have one.

When Johnson posted online over the Gatornationals weekend that he would be running a “limited schedule,” Savoie and Kulungian were taken aback with the news. And Johnson just didn’t seem to be jelling with the team—frequently by himself rather than with the guys, and earning Savoie’s furor when he initially wasn’t present for driver introductions.

“We like Steve,” said Kulungian. “We were excited to be a part his success. I was really looking forward to give back to someone who’s given me so much in my career. It just didn’t work out that way.”

It was no surprise for me to learn sometime later that Johnson was out. But that leaves me and everyone else in the same position we were in all winter when we learned that Tonglet wasn’t coming back—who if anybody will ride the second WAR Suzuki?

Savoie took the “if” out of the question when he told me a week and half ago that the bike would be racing again this year. So who?

How did Tonglet lose the seat to begin with? It surely wasn’t a lack of performance with six wins. This team was a dream pairing. Savoie had known LE’s dad Gary for decades and LE is clearly a baller of a rider and racer.

But Tonglet’s sponsor Kenny Koretsky of Nitro Fish wasn’t quick to write the 2018 check. WAR had gotten the impression that Koretsky didn’t like to be bothered and so they didn’t call. WAR also had the opinion that their team’s performance didn’t warrant second thoughts.

So when Johnson came to his former longtime tuner Kulungian, they made a deal for the seat—what WAR thought was a full year deal. When Tonglet finally got the green light from Koretsky, it was too late.

But now, with Johnson out, it’s no longer too late. Cool heads and Koretsky’s checkbook can mend the split that never should have happened in the first place. And they will.

Tonglet was gonna race either way. He showed up at Gainesville with his brother GT, their dad Gary, and their family bike with a motor borrowed from Freddie Camarena. They qualified 15th, well behind Savoie in sixth and Johnson in seventh. Tonglet and Savoie went out in round one, Johnson in round two.

WAR found an issue with their motors after Gainesville that V&H have addressed, so expect to see both bikes running strong this weekend at zMAX and expect to see Tonglet on one of them. LE won this race last year.

The Tonglets always fought the good fight against the big money teams. LE was with one of them for one shining year, and will be back with that team for the remainder of 2018.