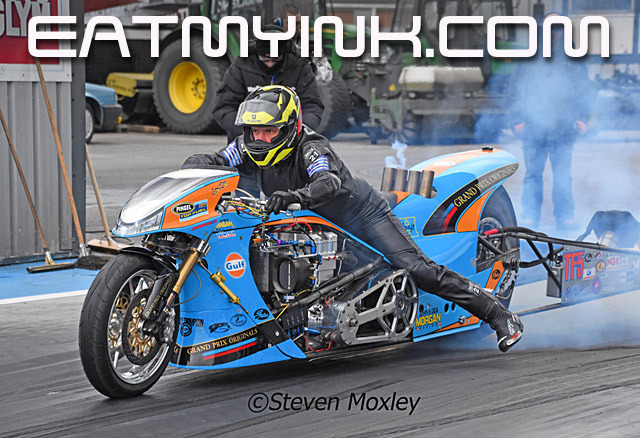 Weather disrupted the opening round of the ACU Championships over the Easter weekend at Santa Pod Raceway, with rain washing out Friday and Saturday completely. There was a delayed start on Sunday to dry the track.

Over the winter a new all concrete surface has been laid over the quarter mile of track, and with rain and very cold temperatures, racers faced a tricky track. There were two incidents with cars hitting the wall. A decision was made to only allow less powerful vehicles down the track. None of the ACU Championship bike classes were allowed only 8.50 bike, 9.50 bike, ET Bike and Supertwin Top Gas.

Filippos Papafilippou purchased Ian King’s Top Fuel championship winning bike after the Man Cup race in November. He came out on Sunday and did a burnout to get a feel for the bike.

Ian Crichlow was the number one 8.50 Bike qualifier with a superb 8.522 after a one shot qualifying session. But it was Reigning Champion Jake Mechaell who won the event when opponent Jay Roe broke out with an 8.494.

Reigning 9.50 Bike champion Richard Swatzki was the only rider to run a nine-second pass in qualifying (9.732). Lewis Burgess knocked out Swatzki in the semi-finals, and David Bowe won the event on a holeshot 9.68 over Burgess 9.66.

In ET Bike, Bradley Head was the only rider to take part, and thus took the win.