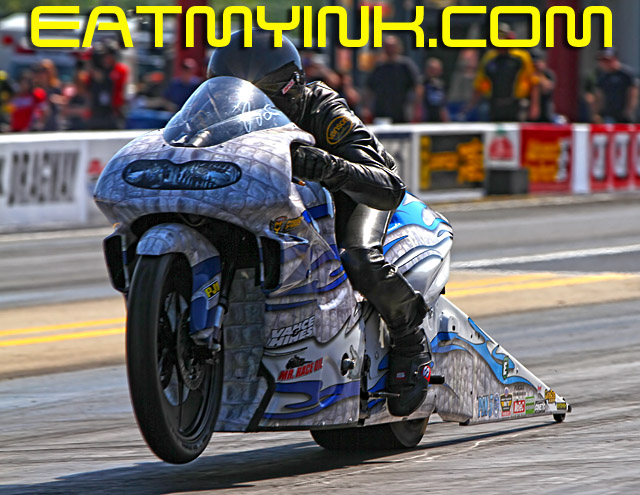 Jerry Savoie won Pro Stock Motorcycle at the ninth annual NGK Spark Plugs NHRA Four-Wide Nationals at zMAX Dragway. He earned his ninth career victory and first at zMAX Dragway when he ran a 6.784 at 195.73 on his White Alligator Racing Suzuki in the final round. He bested Andrew Hines, Scotty Pollacheck and Matt Smith in the final round to lock down his first victory since Brainerd last season.

“We struggled all weekend, but my team worked really hard to get things right so we went out and gave it all we got and figured some things out,” Savoie said.

“My reaction times on this bike are traditionally not great, but I was able to do pretty well today and we had the power on this bike to get a win.”

SATURDAY: LE, the Gator, and the Fish are Back in Front

LE Tonglet, in his first race back with the White Alligator Racing (WAR) Pro Stock Motorcycle team owned by 2016 world champ Jerry Savoie, raced to the No. 1 position with his run of 6.812 at 196.99 in the third round of qualifying for the NGK Spark Plugs NHRA Four-Wide Nationals at zMAX Dragway in Concord, North Carolina.

Tonglet is the defending event winner, the 2010 category champion, and earned his sixth career top position on the KPK/Nitrofish Suzuki.  “The success is all on team WAR and we couldn’t do it without them,” said Tonglet. “They build an awesome team, a really good program, and I’m just fortunate to be part of it.

“The bike is flying and I’m looking forward to going three rounds tomorrow. This is the only track I can say that. We just need to go out there and get win lights at the other end and I feel like I can do that.”

Tonglet will square off in the first quad against his teamowner Savoie, Jimmy Underdahl, and Hector Arana Jr.

Reed notched his  during the second session with a pass of 6.838 at 193.54 on his Fireade/Team Liberty Racing Buell. The 2016 Auto Club Road to the Future Award winner is aiming for his first career No. 1 qualifying position.

“The thing took off and it was a rocket ship,” said Reed. “It was as smooth of a ride that I have had in a long time. I knew I was going fast and it was super smooth.”

A rules change that took the Victory nameplate off of the S&S gen 2 engine allows teams to fit the motor with Buell bodywork—and Team Liberty jumped at the chance.

The top five qualifiers—and six of the top seven—are all V-Twins.

I used to think drama was mostly a Pro Mod thing, but there’s gobs of drama to go around at this event. Read on…