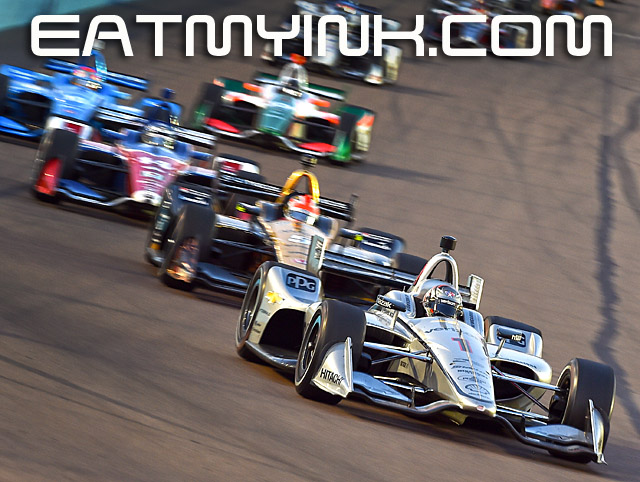 Newgarden, in the No. 1 Verizon Team Penske Chevrolet, was among eight lead-lap drivers who made a pit stop for a new set of Firestone tires during the race’s second caution period when Ed Jones hit the Turn 4 SAFER Barrier on Lap 229 of 250.

Wickens, Schmidt Peterson Motorsports teammate James Hinchcliffe, and Andretti Autosport’s Alexander Rossi elected not to pit and led the field on the Lap 243 restart. The cameras were on Rossi as his rear tires spun at the hit on the restart.

Taking the restart in fourth place, Newgarden immediately roared past Rossi and Hinchcliffe on the outside through Turns 1 and 2 before setting his sights on race leader Wickens.

On Lap 247, Newgarden again took an aggressive high line into Turn 1 and maneuvered past Wickens for the win.

“The team did such a good job,” Newgarden said. “The car was good, the strategy was better, the pit stops were the best. I’m really proud of them and what they did. I think they deserved the win tonight.

“I think we were a top-five car tonight, for sure. But I struggled a little bit with the balance, so it was difficult for me to force the issue until we got to the end when I had a tire advantage. I knew (then) I could force the issue. I kind of bided my time for that. I was trying to be calm tonight and make it to the finish.”

Newgarden’s winning speed of 147.395 mph set a record for a race at ISM Raceway, as well as the number of lead changes (12) and drivers who led (nine). The race was slowed by just two caution periods, for single-car incidents involving rookie Pietro Fittipaldi (Lap 41) and Jones (Lap 229). Neither driver was injured.

Bourdais and Rossi were penalized for hitting crew members on their first pit stops. The ensuing drive-through penalties put each driver a lap down. Bourdais finished 13th but Rossi, who made an incredible 53 on-track passes (19 percent of all passes made in the race), charged back to reach the podium.

“The only reason I was able to do that was because the team gave me an unbelievable car,” Rossi said. “You’ve got to take the podiums when you can get them. Unfortunately, we probably gave away a win today, but that’s the way it goes.

“We spent so much of our time and brain effort and research in the time between the (February) open test and (race weekend) focusing on tire life. Hopefully, it’s something that we can keep an advantage on people going forward for the next short ovals.”

“We were pretty much in control of the race and things were looking good,” said Bourdais. “Then the first and almost only yellow came out. We paraded around for two or three laps and all I was thinking about was hitting my marks when we pitted. I didn’t scrub my tires. I didn’t pay attention that my tires loaded up with a bunch of junk and next thing I knew I was on the concrete in the pit lane. I tried to slow down and locked up the wheels instantly and nothing happened. Nothing. I just skated and two guys left with me.

“That was the failed moment of the race because after that there were no yellows until all the pit stops were completed. So, that was that. We just never recovered from going down a lap because of the drive-through penalty. I made a bunch of passes and recovered a decent amount of positions, but nothing to put us where we belonged. So, pretty disappointing overall for sure.”

Wickens had a whole different experience. “It’s a dream come true,” Wickens said about his second place drive. Indeed, his quick mastery of quick left turns in his very first oval race had me dreaming of Nigel Mansell’s move to IndyCar in the early ‘90s. Of course, Mansell didn’t have the advantage of today’s simulators.

“All I wanted to do was finish every lap of my oval debut,” continued Wickens. “So, to come home P2 and even lead tonight, you can never expect that as a rookie.

“It’s so hard here, but the team did a great job. The car was great all day. James (Hinchcliffe) and I were quick so I think it’s really encouraging for things to come.

“I did as much as I could (to hold off Newgarden after the restart) without crashing both of us, so I don’t think there’s any stopping him. I think once he built up the courage to just out brake me around the outside, it was pretty easy. But congratulations to him.

“You know, these IndyCar races are so much longer than what I’m used to. It’s confusing. I didn’t know where he was at one point and then he popped up in the lead and (Ed) Jones got ahead of me there. But I’m still happy with how it turned out.”

“Not the ending we wanted, (with) that last restart starting second,” said Wickens’ teammate Hinchcliffe. “I thought maybe we had a shot at it. We took a gamble, other guys took a gamble….it’s tough to tell how it went in terms of stopping for tires on the last restart. Alex [Rossi], Robbie and I decided not to. Ultimately the new tire guy won. But track position is key at a place like this, and we made a call.

“I’m proud of the guys. Stinks to lose a couple spots so late in the race like that when we were running at the top all day. But good points day, and huge for the team. Huge credit to the team. Schmidt Peterson Motorsports have done an incredible job since the test here in February when we were at the bottom [of the time sheets], to get two cars in the top six in both qualifying and the race. I think the Arrow Electronics guys really did an incredible job today, picked up a lot of spots on pit lane which is huge for a short oval like this. Huge congrats to Robbie (Wickens) on his first podium.”

With the win, Newgarden also took the championship lead after two of 17 races. The seventh-year IindyCar driver has 77 points, five more than Rossi and seven ahead of Sebastien Bourdais, winner of the season-opening Firestone Grand Prix of St. Petersburg and the polesitter here at Phoenix.

The victory was the 198th for Team Penske, the most of any team in Indy car history. Appropriately with tires playing a pivotal role, it was also win No. 500 for Bridgestone Americas since its 1995 return to Indy car racing with its Firestone and Bridgestone brands.

The next Verizon IndyCar Series race is the Toyota Grand Prix of Long Beach on Sunday, April 15. It airs live at 4 p.m. ET on NBCSN and the Advance Auto Parts INDYCAR Radio Network.