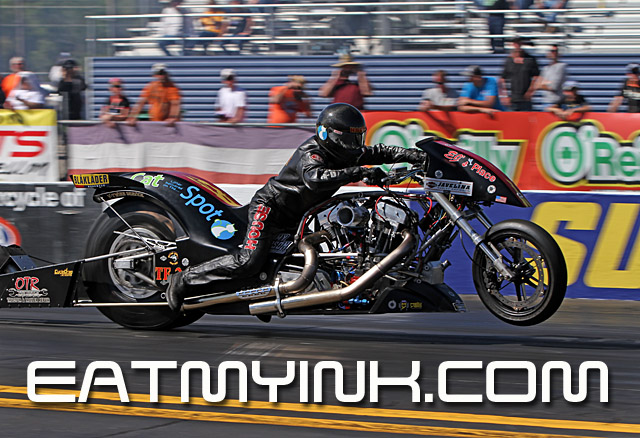 Rickey House threw his helmet into the Top Fuel Harley championship battle, beating defending champ Jay Turner in the final round of the 19th annual DENSO Spark Plugs NHRA Four-Wide Nationals at The Strip at Las Vegas Motor Speedway. House had lane choice and kept it lit against Turner, who slowed to a 6.79 at 158 mph.

Points leaders Tii Tharpe and Doug Vancil both lost in the semis.

TF Harley kept it Noah’s Ark style—two by two. But not so the other pro classes, as this was the inaugural four-wide racing event at Vegas, which featured sellout crowds on Saturday and Sunday.

Steve Torrence piloted his Capco Contractors dragster to a 3.771-second pass at 326.63 mph for the 18th Top Fuel Car victory of his career and second of the season. He defeated the No. 1 qualifier Tony Schumacher, three-time world champion Antron Brown, and Doug Kalitta in the final round.

“I knew my team was confident coming into today, but going into a final round against Antron [Brown], Tony Schumacher and Doug [Kalitta] up against you makes it a tough round,” Torrence said. “Our car still isn’t performing at the level it was last year, but we know we just have to work on the car and prepare for the later part of this season when every race really matters.”

With the victory, Torrence moves atop the Top Fuel points standings as he chases his first world championship in the class.

J.R. Todd ran a 4.041 at 317.05 in his DHL Toyota Camry for his first DENSO Spark Plugs NHRA Four-Wide Nationals win and 11th of his career. Jack Beckman finished in second after his 4.052 at 312.21, while Courtney Force wound up third and Tommy Johnson Jr. ended in fourth.

“We brought out a new car in Gainesville and struggled during Friday’s qualifying this weekend, but I got my confidence up in the fourth round of qualifying and then definitely carried over into today,” Todd said. “I know it’s going to be tough to crack the top ten in this Funny Car class because it’s so competitive, so every win we can get is going to help us crack the Countdown to the Championship.”

In Pro Stock Car, Vincent Nobile picked up his 11th career victory and first at The Strip at Las Vegas Motor Speedway when he ran a 6.591 at 210.44 in his Harlow Sammons Chevy Camaro. He bested Deric Kramer, Bo Butner and Chris McGaha in the final round.

“My team worked their tails off this weekend, we went through three engines over the weekend but overall it was a great weekend and there isn’t any reason we can’t be back in the winner’s circle again soon,” Nobile said. “The car has been running well but we have had some bad luck so far this season, but we are hoping this is our turning point.”

Sunday’s final results from the 19th annual DENSO Spark Plug NHRA Four-Wide Nationals at The Strip at Las Vegas Motor Speedway. The race is the fourth of 24 in the NHRA Mello Yello Drag Racing Series:

story by NHRA with additions by Tim Hailey, photo by Hailey