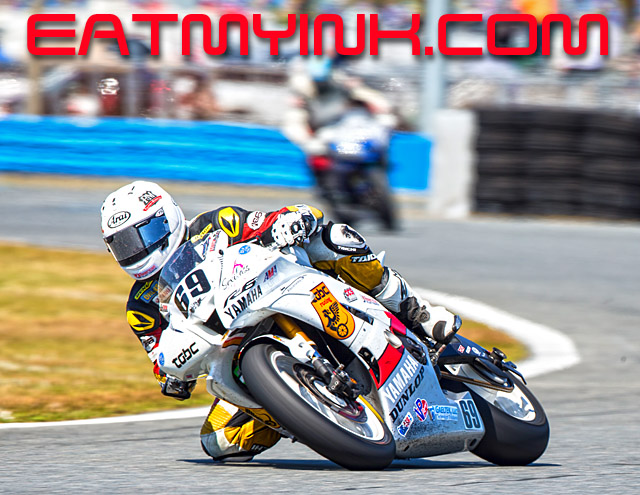 Danny Eslick moved up a place in the history books when he took a historic fourth Daytona 200 victory in the 77th running of the event—57 grueling laps around Daytona International Speedway’s high banks and infield road course.

The win places the TOBC Racing Yamaha YZF-R6 rider Eslick third on the list of all-time Daytona 200 winners. Only Scott Russell and Miguel Duhamel, both AMA Hall of Famers, own more career Daytona 200 titles with five each. After the race, Eslick said, “To be in the same category as those guys is pretty amazing. It hasn’t even really sunk in yet.”

Eslick also described how this year’s win stood apart from his previous three victories. According to Eslick, the TOBC Racing team was not planning on contesting the race three weeks ago due to lack of funding. Within the last two-and-a-half weeks, the team was able to cobble together some last-minute sponsorship and assemble an all-volunteer team of mechanics and pit crew.

The team was also forced to find an engine tuner Friday night after they blew an engine on Friday and had to use an untested spare engine for the race. “This was a scratch crew we put together and they nailed the pit stops, absolutely nailed them,” said Eslick during the post-race press conference.

Taking second-place for the second consecutive year was Cory West. Unlike in 2017 when West lost to Eslick on a last-lap draft pass, the TSE Yamaha rider finished more than 26 second behind race winner Eslick. “It was lonely second. I was kind of just thinking about what I was going to eat after this,” West said during the post-race press conference. “But it was a good ride. I am up here with two of my buddies again. Who knows, maybe we will win one of these things one day.”

Rounding out the podium was Kawasaki-mounted rider Robertino Pietri. While not appearing to be a podium contender early in the race, Pietri used a classic Daytona draft pass on the last lap to edge out Geoff May for third place at the finish line.

Eslick appeared to have quite the challenge on his hands early in the race in the forms of M4 Ecstar Suzuki rider and MotoAmerica regular Valentin Debise, 2015 Daytona 200 winner Michael Barnes, and Farrell Performance rider Jason Farrell.

Polesitter Debise looked to be a serious contender for the win until a massive high-side crash on lap 10. Debise was taken to the hospital after the incident and was diagnosed with a fractured vertebra.

Barnes was running at or near the front until an engine problem took him out of the race on lap 24. Ten laps later, Kawasaki-mounted rider Jason Farrell, who had been running in front of Eslick, was forced to retire from the race due to electrical gremlins.

The 200 was action-packed but relatively incident-free. The race saw two red flags, and both were within the first 10 laps of the race. However, there was some reshuffling of the race results after post-race technical inspections were complete. Six riders were disqualified for technical infractions.

The race also featured two riders who put in impressive efforts further back in the field. Farrell Performance rider, MotoAmerica regular, and 2016 AMA Road Racing Horizon Award winner Jody Barry had moved up to seventh from a 17th place start when he crashed heading into turn 6. Barry dropped down to 42nd in the running order but was able to race his Kawasaki ZX-6R back to 10th place.

Another hard charger was Krunal Jadhav. In his first Daytona 200, Jadhav crossed the finish line in 15th after starting 32nd on the 62-rider grid. Despite running the entire race on one set of tires, Jadhav was able to use the draft to pass three riders on the last lap to finish in the points.

Jadhav was later promoted to 13th after several post-race disqualifications were handed down. His pace and ability to successfully battle through the field will prove invaluable when he makes his MotoAmerica debut later this year.

“Today was my first time racing in the Daytona 200, and I was going for it all day,” said Jadhav. “I made a great start and was able maintain my pace all race. I was hitting my braking markers all day and felt like I had a great rhythm going. On the last lap I was able to use the draft to pass the riders I had been battling with and beat them to the stripe.

“My team gave me great pit stops today, and my Yamaha YZF-R6 and my Dunlop tires were working well out there. I finished ahead of where I was figuring I would today, and it has been a big boost to my team’s confidence.”

CoxRacen rider Bailey Cox’s performance in the 200 shows why he is poised to make a splash in professional road racing. Starting from 12th place, Cox piloted his Kawasaki ZX-6R to an eighth-place finish.

Despite a crash during Friday’s first qualifying session and two early race stoppages, Cox maintained his focus and used his consistent pace and two well-executed pit stops to finish inside the top 10.

“We had a pretty good qualifying, and I was able to maintain my position through the early parts of the race,” said Cox. “I tried moving up to the pack in front of me, but couldn’t stay with them and found someone to run with for most of the race. We had a couple great pit stops in the later stages of the race that really helped our cause.

“We were aiming to finish in the top 15 today, and am very happy with how the race went for us. I am looking to carrying the momentum we started here today to the MotoAmerica round at VIR in May. I want to give a big shout out to my sponsors for making today’s results possible.”

There were more races over the weekend in addition to the 200, and when Cox’s team packed up Sunday evening, it was apparent that Cox’s eighth-place in Saturday’s 200 was anything but a fluke. The CoxRacen rider demonstrated consistent pace all weekend on his Ridersville Cycle/MRP Motorsports-sponsored ZX-6R, taking one win and four podiums in six Championship Cup Series/American Sportbike Racing Association races.

Cox took a second-place and a win Friday afternoon in the Expert Supersport Middleweight and Expert Supersport Heavyweight classes, respectively. Cox’s win was a close one, narrowly beating out his competition by a mere 0.041 seconds.

“I had been looking forward to getting my 2018 racing season going at Daytona ever since the end of last year,” said Cox. “I won a CCS regional championship last year in my first year racing as an expert, and was looking to carry that momentum into 2018.

“I crashed in Friday’s first qualifying session for the 200, but my amazing crew got the bike back together and ready for the rest of qualifying and Friday’s races. I grabbed a second-place in my first race on Friday afternoon, and scored a hard-fought win in my second race.

“Saturday morning, I took home another second-place and was riding a high into Sunday after finishing eighth in the 200. On Sunday, we had another tough battle and missed out on a win by less than 0.04 seconds. I followed that up with a third-place in the Expert Superbike Middleweight race and had planned on racing the Expert Grand Prix Middleweight and Expert Superbike Heavyweight. Unfortunately, the bike experienced a mechanical failure and our weekend was over.

“Overall, I was really happy with the incredible effort my team and family put in this weekend. They really had my back, and my MRP Motorsports-supported crew really had my Kawasaki ZX-6R working well out there.

“Six races is a lot to run in one weekend, especially when one of them is 200 miles long. I want to give a big shout out to 4Arm Strong and Fitness-N-Me for having me physically ready to perform my best this weekend. I am looking forward to getting on track again in April, as well as entering our first MotoAmerica races of the season at VIR in May.”

For Jadhav, Sunday was a morning to forget. His team went from the high of their performance in the 200 to the low of discovering one of their Yamaha’s forks was leaking the next morning before the Championship Cup Series/American Sportbike Racing Association sprint races got underway.

The team was forced to skip practice and scrambled to get the fork repaired. Fortunately, they were able to install a new fork seal in time to get Jadhav out on track for his first race of the day.

Unfortunately, the newly-fixed suspension had a different feeling to it. Jadhav has forced to take a seventh-place in the Expert Grand Prix Middleweight class race while using the race like a practice session.

Jadhav’s races were back-to-back, so he went right back out on-track for the Expert Superbike Middleweight race. With laps under his belt on the repaired suspension, Jadhav was able to push much harder and took home a third-place finish.

“Sunday was a bit of a nightmare compared to Saturday,” said Jadhav. “But our proven ability to come back and move up the field in the 200 helped us keep our composure, and we were able to get the fork repaired in time for our races.

“In the first race, I wasn’t sure what to expect out of the repaired front suspension and did not have the confidence in it to really push hard at first. We had to settle for a seventh-place in what was basically a practice session for us.

“I went right back out for the second race with much better feeling in the front of the bike and was able to ride the bike much harder. We were able to salvage a podium and end the weekend on a high note.

“We are looking forward to our next outing at CMP in April before we make our MotoAmerica debut at VIR in May.”

Jadhav and Cox will have one more weekend of CCS/ASRA racing at Carolina Motorsports Park April 14-15 before they make their MotoAmerica debut at VIRginia International Raceway May 4-6.