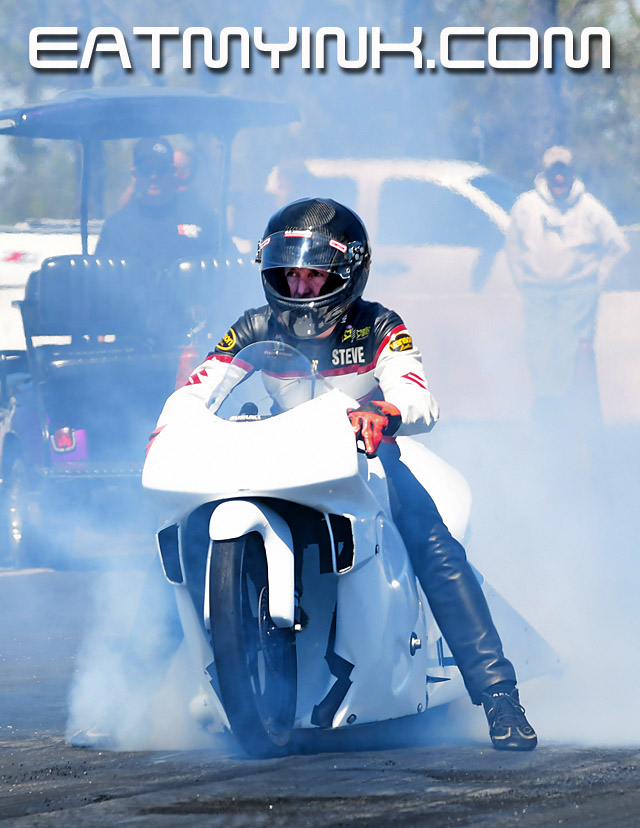 Eatmyink.com broke the story back in the first week of February that 2017 regular season dominator LE Tonglet and his Nitrofish sponsorship would not be returning with the White Alligator Racing NHRA Pro Stock Motorcycle (PSM) team. Back then, Steve Johnson was listed as our #3 choice as his replacement, but as you can see in that article, he was really our #2.

On March 6th we unofficially called the seat as Steve’s in the Eatmyink Facebook group, once again beating all news sources by nearly a week with the call.

Now we bring you coverage of the new combination’s first hits on 2017’s winningest Suzuki as Johnson came to Bradenton Motorsports Park near Sarasota, FL for his first pulls. This was the longest-serving Pro Stock Motorcycle rider’s first time using EFI, but most importantly a reunion with his former tuner Timothy Kulungian.

Steve was unable to sit down with us, but Kulungian did confirm the WAR team’s clutch setup is much different than what Johnson used for his own team. So yes, it will take time to get used to this tune-up—as it did for Tonglet last year—but Kulungian was nothing but positive. “Steve is good at what he does,” said Tim. “We had a good day.”

WAR rider and team owner Jerry Savoie said he was looking forward to working with Johnson.

Meanwhile, many teams went to Orlando to test, where our original #1 pick for the WAR seat—Scotty Pollacheck—ran a personal best 6.78 right off the trailer. His teammate Joey Gladstone finished the day with a best of 6.816 at 194 mph.

Mark Paquette, Angelle Sampey, Cory Reed, Andrew Hines, Eddie Krawiec, and Matt and Angie Smith were all out testing in advance of PSM’s season debut at the weekend Gatornationals at Gainesville Raceway. You can find videos and timeslips in the Eatmyink Facebook group.

Savoie doubts the importance of who’s quick in testing, and one need only look at last year’s low testing numbers and high Gators qualifying results by the Hector Arana team (#2 qualifier) to show that that’s true. “We go to testing and do mediocre and don’t really set the world on fire, and then we go out there and qualify #1 at the races,” said Savoie. “A lot of guys in testing try to beat ‘em into the wall and get everything they can out of them, and we don’t do that.

“We go, we make some slight adjustments, we try this and try that, and then we go race. We don’t try to beat ‘em up and I don’t pressure Tim about anything.

“Just like at the races. He’ll say ‘I’m gonna try this or try that’, or he might say to me ‘Dude, this is all we got, let it rip.’ I know what we’re doing, I don’t care what other people are doing. We’ll see what everybody’s got when we get to Gainesville.”

photos by Anne Proffit, story by Proffit and Tim Hailey