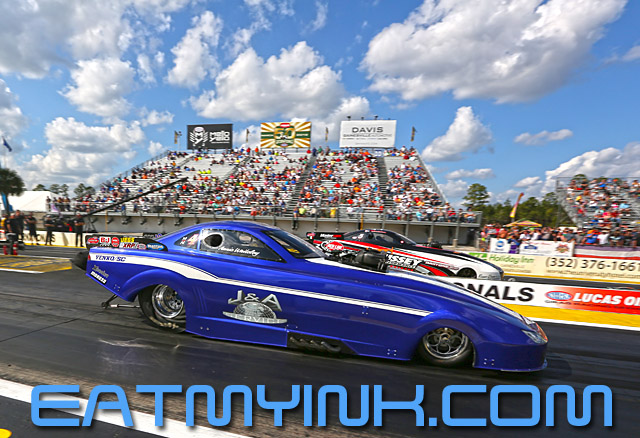 Brandon Bakies, of Alexandria, Louisiana, the No. 14 qualifier in the 59-car Super Stock field, reached the quarterfinals.

Jeff Taylor of Sellersburg, Indiana, raced to the Stock Eliminator win in his Chevrolet COPO Camaro. Scott Libersher of Wilmington, Illinois, reached the semifinals in his COPO Camaro. “The car was really good,” said Taylor. “We got a few breaks along the way and I had a lot of good help,” Taylor said. “My wife was my crew chief this weekend, so I think she’ll stay employed.”

Leah Pritchett was first off of the starting line in two rounds of Factory Stock Showdown competition. Despite her reaction time advantage, her second round opponent Randy Taylor, of Artesia, New Mexico, was able to take the lead and cross the line first, ending Pritchett’s first Factory Stock Showdown event of the year with a quarterfinal finish.

Bell’s 8.176-second pass at 167.47 mph drove to the victory over his teammate in the first race of the seven-event series. “The class is just so much fun and competitive,” said Bell. “At St. Louis (last year) when we wrecked this car, I didn’t want to end it that way. So we worked all winter to bring the car back and now here we are. To have both of my cars in the final was just super.”

David Barton of Robesonia, Pennsylvania, driving a Gary Wolkwitz-owned Chevrolet COPO Camaro, was the No. 1 qualifier. Barton won the Gainesville event in 2017 on the way to earning the series title.