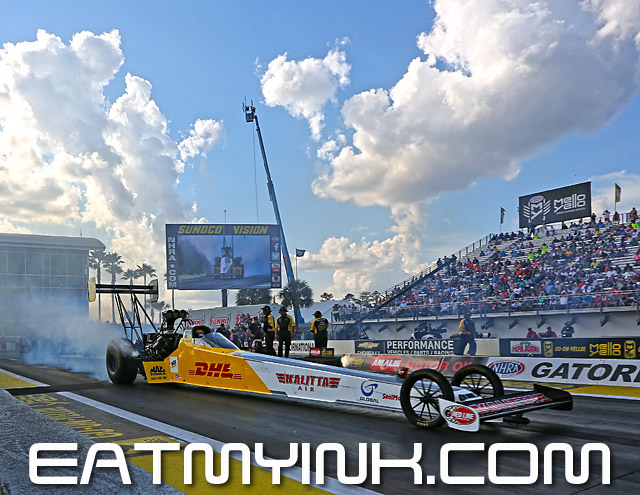 Richie Crampton got the uncontested win when he piloted his Kalitta Air/DHL dragster to the winning run of 3.854 seconds at 314.90 mph after Shawn Reed had to shut off his dragster on the starting line. This is Crampton’s first Wally since Dallas 2015, first event victory at Gainesville Raceway, and eighth overall. “This is probably one of my most rewarding wins, ever,” Crampton said. “All I ever wanted to do was stand in the winner’s circle with (team owner) Connie Kalitta. Not a lot of people have had that luxury and I’m not taking this one lightly.”

Crampton beat his teammate (and Connie’s son) Doug Kalitta in round 1, Mike Salinas in 2, and Antron Brown in 3.

Reed, who raced to his first career final round, started from the No. 12 position and defeated Pat Dakin, Tony Schumacher, and No. 1 qualifier Clay Millican before the final.

Qualifying for the class was a total shitshow, with car after car failing to get down the track round after round.

After resetting the Gainesville Raceway speed record earlier in the weekend and running low E.T. of the first qualifying session, defending event champion Tony Schumacher looked prime for a repeat.

Schumacher began his race day with a round one matchup versus Brittany Force. Force made her best run of the weekend, but it was no match for Schumacher’s 3.717-second pass, which held up to be best of the raceday.

The winningest Top Fuel driver in Gainesville Raceway history faced Shawn Reed in the quarterfinals. Schumacher was first off of the line but an electrical short inside the cockpit prevented him from making a clean run, and it was Reed’s race to win.

“We had an electric issue right when I staged the car,” said Schumacher. “I’ve never had that happen before. I hit the gas and the timers never worked. I smoked the tires because none of the timers were doing anything. I pedaled it once. Pedaled twice and I wasn’t going to catch him, so I shut it off. That’s when I saw the smoke and small fire inside the cockpit. I smacked it and put it out with my hands, but just like that our day was over. It’s frustrating to have something like that happen. We worked hard all weekend to put ourselves in a good position today and that showed in the first round when we made our best pass of the weekend. This U.S. Army team won’t quit. We all want to win so bad. We’ll get back after it and just keep plugging away. This was a great weekend for the fans of NHRA and we were just hoping to make Gatornationals history today. We’ll have to come back next year and try again.”

After qualifying third, 2013 NHRA Gatornationals Top Fuel event champion Antron Brown faced rookie Audrey Worm in round one. Brown, the 2017 Gatornationals runner-up, had the advantage at the step. The car smoked the tires early into the run, and Brown pedaled it down the Gainesville Raceway stretch to pick up an ugly round win over Worm who encountered problems right at the hit.

In the quarterfinals, the three-time Top Fuel champion went to battle with his DSR/Army Racing teammate, Leah Pritchett. Both drivers made solid runs, but Brown was able to edge past Pritchett for the win.

Brown’s day ended with a semifinal matchup versus Richie Crampton. For the third round in a row, Brown had the better reaction time. Unfortunately, his dragster went up in smoke almost immediately and Crampton was able to pick up the round win.

“It was tricky out here,” noted Brown. “The track got hot. It just kept getting worse and worse during the day.  We were trying to keep up with it and we were getting close. We made a good lap in the second round and then we backed it off for the third round. We just didn’t back it off enough. With that being said, we’re going rounds and we’re picking things off one at a time. We just need to keep improving.

“Our Matco Tools/U.S. Army Toyota team is starting to get our feet under them. We’re taking it one step at a time and it’s coming.  We’re going to be fine. We just need a little bit of time.”

Top Fuel world champion Brittany Force made her best run since her dramatic wreck at the season opening NHRA Winternationals. Unfortunately, it wasn’t enough to get the first-round win against Tony Schumacher. Force’s 3.742 pass at 325.53 in her Monster Energy dragster was bettered by Schumacher’s 3.717 at 329.26.
“The car went straight down the track. We struggled in qualifying, but we figured it out for race day,” Force said. “We really did need to figure it out for yesterday to have a better pass than that. Still, it was outstanding. But against Schumacher, we weren’t able to turn the win light on. We are leaving good. It was an awesome run. To come out on race day and be able to put up a number like that, we’re happy.”
Despite not winning against Schumacher, Force’s time would have won six of the seven other first round races.

Leah Pritchett clocked a 3.735-second at 321.50-mph pass in the Papa John’s/FireAde Top Fuel dragster to knock out Terry Haddock in the opening round of eliminations. She showcased her quick reflexes with a .053 reaction time at the starting tree, the quickest light of the round.

Pritchett’s day ended in the quarterfinals with a 3.779-sec run. Despite making the second quickest pass of the session, it wasn’t enough to overcome teammate Antron Brown’s even quicker and faster 3.793-sec run.

“We are still making progress,” said Pritchett. “I feel like we have our gremlins out of the way. Our hot rod is back and it showed it on the track today. I take the blame for losing to my U.S. Army teammate Antron Brown. He came out stronger. It’s extremely frustrating. I missed it. I’ve been on it all weekend in both cars and missed it when it counted most. We win together as a team and it feels great. The highs are high and the lows are low. Having to sit on that for two weeks waiting for Las Vegas isn’t going to be fun, but we get to switch gears and put ourselves in the Four-Wide mindset. This has been an exciting, very high-paced weekend in Gainesville. I’m disappointed it ended early, and on my shoulders, but we’ll bounce back.

“To be able to come out on Sunday and post our best two runs of the weekend shows that we qualified with strategy. That’s what this entire season is all about. Today’s runs were an accumulation of what was learned in the four qualifying runs. That shows that the overall big picture is what’s important. We aren’t out here to show out on occasion, we are here for the long haul.”