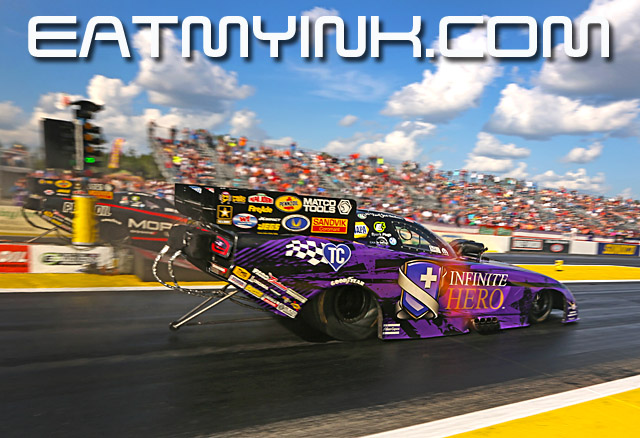 After earning the No. 1 qualifier on Saturday, Beckman secured his first victory since St. Louis 2017. “Winning this race was such a bucket-list thing,” Beckman said, “The Gatornationals came on the schedule in 1970, that year was a big year for our sport and it has been at this track ever since and I’ve never gotten close.”

Beckman raced against Jim Campbell, Del Worsham, and Shawn Langdon before entering his first final round of the season.

Not only did Beckman get to finally achieve his goal of winning ‘the Gators,’ but Sunday’s victory was also a sentimental one for the driver of Terry and Doug Chandler’s Infinite Hero Foundation Funny Car.

“I flew in a day earlier, and on Thursday I went to the Hall of Fame [dinner]. I got to present Johnny Gray with the Pat Garlits award in honor of Terry Chandler, whose name is still on the side of our car and is the one who made all of this possible. There are 21 of us who have jobs today because of Terry Chandler and how big her heart was, and now her husband Doug wants to carry it on. He’s loving it because he knows Terry is looking down and saying, ‘Alright — my boys did it.’”

Sunday’s win was the 27th of Beckman’s professional career and first of 2018. He moved from sixth to ranked second in the NHRA Funny Car points standings.

Hagan and Robert Hight executed nearly synchronized side-by-side explosions during the quarterfinals, destroying the Funny Car bodies of both competitors. Hight’s Auto Club of Southern California Chevrolet Camaro SS crossed the finish line with a 4.067-seconds at 265.53 mph following behind Hagan’s 4.027 at 291.26.
“I felt the car nose over just a taste and my initial thought was it was starting to slip a little. The track is hot and it is a little greasy out there,” explained Hight. “I couldn’t see Hagan over there and it wasn’t like it was hazing the tires or anything else. As it turns out the tires weren’t spinning at all.”
Hagan brought out a back-up car to defeat teammate Ron Capps in the semifinals to advance to his second final round of the season. “We had a pretty great race day, to be honest,” said Hagan. “I’ve never been to the finals in Gainesville. We kind of started off with a whole new game plan from qualifying and the track conditions were pretty good. We obviously had a huge blow up in the second round. Then to watch these guys pull the other car back out and put it together in the amount of time they had, and to turn a win light on against Capps then to be able to go to a final, it was huge and it speaks for itself.”These guys put a great race car together. We ran a really close race out there. It was within one [thousandths of a second] but it was one of those deals where I just got left on by Jack Beckman. It’s one of those deals were you put that in the bank there and you don’t forget it. You have to go home and work on that and not let these guys down who worked all day long to get you there. We’ll take these next few weeks and revaluate and focus and move forward.”

When Hight returned to the pit area and began evaluating with crew chief Jimmy Prock, it became clear his Auto Club Chevrolet Camaro was immediately wounded as it neared the finishline and an internal chain reaction led to a dramatic explosion as Hight was pulling away.
“It kicked two rods out when it blacked the bearings in the crank and then it hit the valves which blew it up. The car gave me no indication at all before it exploded,” conclude Hight
Hight’s initial concern after he stopped his race car was that he possibly impacted Hagan during his incident.
“What really scared me was once I got it under control and I looked over and saw his body was off his car. I am thinking, ‘Oh man, he got gathered up in me.’ Then I stood up and looked and his injector was sideways. I realized he had an explosion as well. We are just lucky we didn’t get into each other. I didn’t know who won. I was hoping we got the win light and we could come back and get another car together and try and win this race.
“We have a lot of work to do before Vegas. We have a lot of things to figure out but we have the best people over here. We’ll get to the bottom of it.”
In the first round, Hight defeated Dave Richards with a 3.894 pass at 330.55 while Richards coasted to an 8.232 at 85.43. Hight moves to fifth in the points standings.

Three-time Gatornationals Funny Car champion Ron Capps earned a spot in the top half of the field after running low E.T. of qualifying rounds three and four, picking up six valuable bonus points.

On race day, Ron Capps’ first opponent was Bob Tasca III. Tasca and his team weren’t taking Capps lightly, when they clocked their best run of the weekend (3.981), but it was no match for Capps’ 3.959.

In round two, the 2016 World champion had lane choice versus Courtney Force. Capps was first off of the starting line and never trailed for the win. He drove his NAPA AUTO PARTS Dodge Charger R/T down Gainesville Raceway in 4.060-seconds and into the semifinal round.

It was a battle of the DSR Dodges in round three as Capps took on his teammate Matt Hagan. Capps pulled away first but hazed the tires early. Unfortunately for Capps, Hagan was able to make a clean pass, setting off the win light and ending Capps’ day.

“You know, it’s such a big race, the Gatornationals,” said Capps. “These big races seem to take a little bit more to get over. And the further you go on Sunday, like we did getting to the semifinals, you feel like you have a good shot. The way I look at it, the more runs we give [crew chief] Rahn Tobler, the more competitive our car is going to get, and I really felt like we had a handle on it. For some reason, it smoked the tires at the hit of the throttle, and we haven’t done that in a long time.

“We’ll have to look and see what it did and go on to the next race. It was a tough track, tough weekend for crew chiefs, with the weather changing day in and day out. We’ll take the semifinals and go on, but we really felt it was our shot to get the NAPA AutoCare guys into the Winner Circle.”

Courtney Force and her Advance Auto Parts Chevrolet Camaro got into trouble in the quarterfinals while racing Capps. Force pedaled to an 8.255 pass at 88.83 while Capps managed a 4.060 at 317.64.
“We pulled the car up for second round and unfortunately smoked the tires at the hit of the throttle. I tried to gather it back up and get back on the throttle but Capps had already taken the win,” Force explained. “We had a safe weekend and that is the most important thing. All the teams are going to be working hard to figure out what is going on with our race cars before we get to Las Vegas. I am proud of how this Advance Auto Parts team performed this weekend and the fact that we are going rounds. We are going to focus on the positives.”
Force defeated her father in the first round with a 4.003 pass at 277.20. She is now 2-1 versus John Force at the Gatornationals and 10-15 in her career. She has won three of the last four races against him. Force is now third in the points standings.
“It was a little nerve racking pairing up with my dad. I am always wanting to be behind his car at the starting line, hoping for a safe run for him. When I am in the other lane I can’t see what is going on with him. I am just out there to focus and do my job racing straight down the center of my lane. It dropped a hole down track and shut off on me but we were still able to get around him for the win,” Courtney Force said.
Sixteen-time champion John Force ran a planned 700-foot shut-off in the first round against daughter Courtney Force. After three consecutive races with an engine explosion, John Force’s final three passes of the weekend were used as test laps.
“We have to evaluate it and go test. We’ll figure it out. Our plan to test in the first round was good. The car looked good,” said Force. “It’s a matter of you don’t want to hurt the car and you don’t want to hurt somebody else. We tried to run it for every lap at three races and test sessions and all we did was blow it up.”

After qualifying in the top half of the field, most recent Funny Car runner-up Tommy Johnson Jr. faced Cruz Pedregon in round one. Johnson was first out of the gate and never trailed, driving Terry and Doug Chandler’s Make-A-Wish Dodge Charger R/T to the win with a clean and straight pass.

In round two, Johnson once again had the starting line advantage. Unfortunately for Johnson, his opponent Shawn Langdon was able to pull ahead early into the run and take the win against Johnson’s tire smoking effort.

“We’re making a little progress, but we’re going to have to keep working at it,” said Johnson. “We’ve got good data on the six-disc [clutch]. When track conditions are good we run well and qualify well. We just need to keep learning what adjustments to make when the track conditions change and it gets hot out.

“So, we’re making some strides, we’re still going a round or two. If we can continue this progress, we’ll get better and better.

“I’m looking forward to going back to Vegas. We went there and won last year, and it’s always one of my favorite tracks, where we seem to do well. It’s a good racetrack to go to and rebound, get some round wins, get some more data on the six-disc clutch and hopefully top it off with another win.”