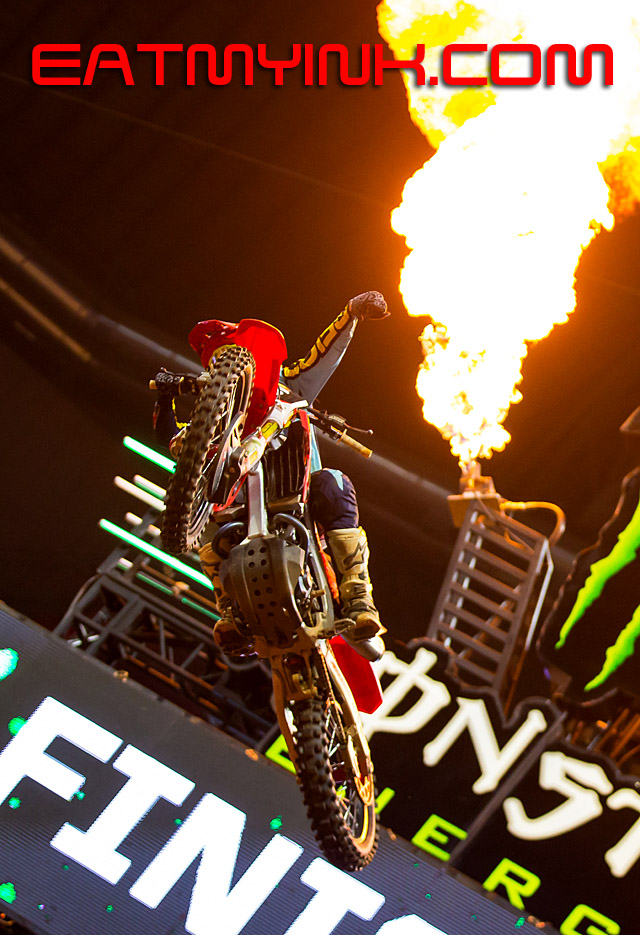 “The track was brutal out there,” Anderson said on the podium. “I didn’t want to take too many chances but luckily I gave myself a good cushion with the first two races and managed the Triple Crown as best as I could. Excited to come out with a win in Atlanta.”
In the first 10-minute 450SX Class Main Event, Team Honda HRC’s Christian Craig caught the lead ahead of Smartop/Bullfrog Spas/Honda’s Justin Brayton followed by Rocky Mountain ATV/MC/KTM/WPS ride of Blake Baggett and Anderson. An epic battle for third ensued between Baggett and Anderson while Brayton forged his way into the lead for a huge win. In the second 12-minute Main Event, Anderson nabbed the holeshot ahead of Monster Energy/Yamaha Factory Racing’s Cooper Webb and Monster Energy Kawasaki’s Eli Tomac in third. Webb pressured Anderson for the lead but it was Anderson by less than a bike length at the finish. In the third 15-minute Main Event, Craig nailed another holeshot ahead of Baggett and Team Red Bull KTM Factory Racing’s Marvin Musquin who would come from behind to emerge as the eventual race winner. Anderson, who finished 2-1-4, was awarded the overall win with the lowest combined score.
Round 3 of the Eastern Regional 250SX Class Championship went to Monster Energy/Pro Circuit/Kawasaki’s Austin Forkner who went 4-2-3 for the overall victory.
“That whole moto was really chaotic,” Forkner said on the podium. “The track is gnarly. You just had to be patient and try to hit your marks every lap. It was my first Triple Crown. It was definitely tough, but it was good.”

In the first 8-minute 250SX Class Main Event, Monster Energy/Pro Circuit/Kawasaki’s Martin Davalos got off to an early lead but a mistake in the rhythm section handed Rockstar Energy Husqvarna Factory Racing’s Zach Osborne the wide-open lead ahead of Monster Energy/Yamalube/Star/Yamaha Racing’s Dylan Ferrandis and Troy Lee Designs/Red Bull/KTM’s Jordon Smith. In the second 10-minute Main Event, Forkner pulled the holeshot ahead of Osborne and Davalos until a mistake by Osborne pushed him back to third. Davalos managed to gain the lead ahead of Forkner with Smith and GEICO Honda’s RJ Hampshire in fifth. In the third 12-minute Main Event, GEICO Honda’s Jeremy Martin scored the holeshot and lead from the start while Osborne was caught up in a first lap melee and worked his way from 16th to fifth by the checkers. Meanwhile, Forkner managed a last-lap pass for third, which would hand him the overall victory with a 4-2-3 over Osborne’s 1-3-5.

“It was a tough night,” Osborne said on the podium. “I’m a little bummed to lose it down on the last lap but I’m happy with the way things went. Nice to be on the podium again.”

All eyes were on Forkner after taking his first-career victory last weekend in Tampa. The three-race format meant that starts would be critical and Forkner was able to lock down three good starts to put himself in contention. In Main Event 1, he got a decent start but was forced to push his way through the pack from sixth to finish fourth. He really took charge of the start in Main Event 2 when he got out front early and led nearly every lap before finishing second.

With the overall on the line, Main Event 3 was chaotic after Forkner got a mid-pack start but was quickly pushing his way to the front. He had time on his side with the final race being the longest. As he entered the final lap, Forkner sat second overall but a last-lap pass pushed him into a tie for the overall with Forkner winning the tie breaker and taking the win.

“The format is really fast and it makes that final race pretty crazy,” said Forkner. “We did know where we needed to be in that final race to end up on the podium or get a win, but I saw my mechanics’ pit board with two laps to go and knew I needed to get by the rider in front of me. It’s really cool to take the win and make up even more points. There is a lot of racing left and I think I’m really going to like Daytona.”

Martin Davalos had an up and down nightwith a lot of great moments. In Main Event 1, he was out front for the first several laps before going down. He quickly got up and still finished eighth. Main Event 2 was very solid for Davalos who charged from third to finish with the win. He put himself in contention for the win when he started second in Main Event 3, but went off the track after the whoops and it took some time to get going again. His 17th-place finish in the final race pushed him down to finish eighth. With all the chaos and Davalos’ win in Main Event 2, he moved up to 10th in the overall points.

“Today was such a rollercoaster for me and I felt like I had the speed to win or at least be up on the podium,” said Davalos. “The track was really tricky and I know I wasn’t the only one who had issues throughout the night, but I need to try and execute because I want to win for the team.”