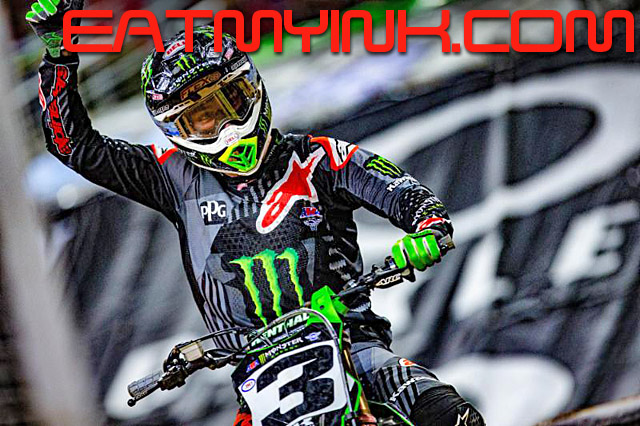 Monster Energy Kawasaki’s Eli Tomac had a perfect night after posting the fastest qualifying time, leading every lap of his Heat Race, and all 25-Laps of the 450SX Main Event for his third Monster Energy Supercross win of the season—this time in front of a crowd of 57,421 fans inside AT&T Stadium in Arlington, Texas.
“Once we got going, it was just staying consistent and just me and the bike,” Tomac said on the podium. “It was just a good day. We’ve never had a great finish here in Dallas, so this is something I’ve always wanted to check off my box, which is a win here in Dallas so, yeah, it feels awesome.”
Team Red Bull KTM Factory Racing’s Marvin Musquin captured his second-straight second-place finish after a third-place start. For the third consecutive week, Rocky Mountain ATV/MC/KTM/WPS Team’s Blake Baggett finished on the podium after a fourth-place start.
In the season opener of the Eastern Regional 250SX Class championship, Rockstar Energy Husqvarna Factory Racing’s defending champion Zach Osborne worked his way up to third from a fourth-place start before a mistake in a corner dropped him to fifth. Osborne then battled his way back to the front of the pack to lead six laps and claim a come-from-behind victory.

“It was OK; I probably was not fastest guy all day, but I just had some luck there in the main and it happened,” Osborne said on the podium. “I’m just happy to get this first one out of the way. It’s been a really long wait; the last six weeks have felt like an eternity.”

Monster Energy/Yamalube/Star/Yamaha Racing’s Colt Nichols started seventh and fought to a second-place start ahead of Autotrader/Yoshimura/Suzuki Factory Racing’s Jimmy Decotis who rode to a career-best third-place finish after an eighth-place start. GEICO Honda’s RJ Hampshire grabbed the holeshot and lead 13 of the 19 laps but a mistake in the whoops dropped him to fourth.

Monster Energy Pro Circuit Kawasaki’s Austin Forkner started his sophomore supercross campaign with a heat race win and then came through the pack to earn seventh. Teammate Martin Davalos had a good day going for him as the top qualifier and heat race winner, but was hit hard from behind in the first turn of the main event and was unable to continue the race.

Davalos put all eyes on him as the top qualifier on the day. He was able to translate that day speed to the night racing, winning his respective heat race to enter the main event with first gate pick. Davalos got a good jump off the line and was about to put his KX250F into the first turn when he was hit from behind and went down. The hard crash forced Davalos to retire from the race, turning his attention to Round 2 in Tampa, Florida, next weekend.

“It’s a tough pill to swallow when you put in the work all day long and then get taken out on the start of the main event,” said Davalos. “I’ve been in this position before and am not going to give up on my hopes for a championship. It just got a little more challenging. We’ll see how I feel this week and will hopefully be back out on top next weekend.”

Forkner has overcome a lot on his road to Round 1, recovering from an off-season injury to be race-ready in time for the opening round. He quickly adapted to the track in his heat race and claimed the win. In the main event, Forkner avoided the first-turn carnage that collected his teammate, but went down later on the opening lap that pushed him back to 14th. He was on a mission to make up as many spots as possible crossing the line in seventh, just over one second behind sixth.

“The first lap was very chaotic with the riders going down in the first turn and everyone trying to settle in,” said Forkner. “I made a mistake and went down, costing me some time. I was able to get in a groove and start picking off riders, but the front group was already pretty far ahead. I almost got the next two guys who connected on the final lap, but just missed out. We’ll take what we’ve learned and come back strong next week.”