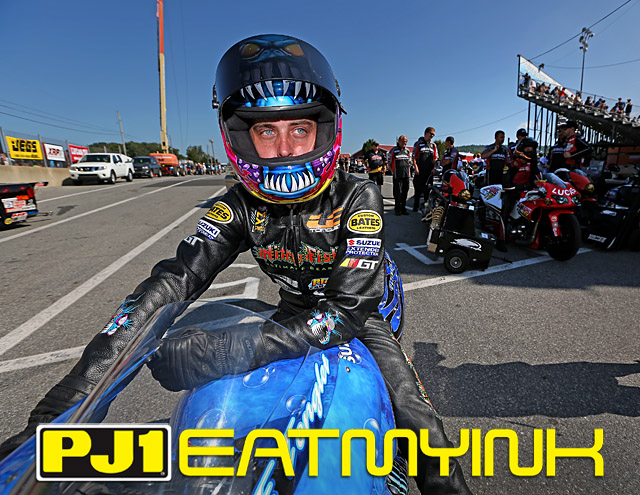 story and photos by Tim Hailey.

I generally keep more information under my hat than you could possibly imagine, ESPECIALLY when it comes to Pro Stock Motorcycle.

So when I checked my phone at a White Castle drive-through in Seymour, Indiana last week and saw that Competition Plus got the heads-up that Matt Smith was riding Joe Riccardi’s San Marino Excavating Suzuki in 2018, I figured it was time for me to shake the frost off and get serious about PSM’s off season.

I’d known for months that Matt was sniffing around the San Marino trailer, just as I’d known Joey Gladstone and Riccardi were parting ways before that. But honestly, I didn’t think that Smith and Riccardi would hook up—especially not until the last possible minute. Matt has always been so good at finding the funding for his own program ever since he left G2.

Matt’s Polaris deal was scuttled by the NHRA last fall. NHRA should have been thrilled that Polaris wanted to remain with them. The Minnesota-based powersports conglomerate killed off the Victory brand that Smith’s program (and others, including Liberty Racing and Mark Paquette) was built around. Given the opportunity to rethink their marketing program, Polaris could have easily decided that Victory’s NHRA involvement wasn’t working for them.

Instead, Polaris decided to double-down on Smith and the NHRA. They wanted to extend the deal AND put money—and crucial factory support—into NHRA drag racing by expanding onto the midway with a full factory presence.

Sounds great for everybody, right? Not so much for Harley-Davidson. According to Smith, NHRA cited their contract with H-D for putting the kibosh on any Polaris midway presence and—thus—on Smith’s sponsorship. It was all or nothing for Polaris.

And so Smith was looking for a 2018 partnership and apparently has decided Riccardi’s brand new Vance & Hines-built Suzuki is his best option. This might be the first time since before joining G2 in the mid-2000s that Smith has been on a Suzuki.

Matt’s wife Angie will remain on the Denso Buell for now, even though the Suzuki that Joey Gladstone rode last year is available, and Riccardi will have Kelly Clontz’s Suzuki under his awning. One would think that three Suzuki’s would add data and ease tuning, but Japanese sponsor Denso apparently wants Angie on American-made.

Very newsworthy is that LE Tonglet will not be returning to the seat of the White Alligator Suzuki that dominated the regular season last year. His sponsor Kenny Koretsky of Nitrofish was slow to pony up and WAR took a check from someone else, so Tonglet will return to his family’s Suzuki in 2018.

So now the hottest question in PSM is “Who will ride the WAR Suzuki?” WAR’s Tim Kulungian and Jerry Savoie were absolutely tight-lipped about their new teammate, while both lamented the loss of the perfect chemistry they shared with Tonglet last year.

“There are literally fewer people than the fingers on your hand who know who the rider will be,” said Kulungian. “And you’ll notice I’m not including the thumb.”

So let’s rate the options:

My number one choice is Scotty Pollacheck. Scotty was known to have been very interested in the WAR seat when it became available last year but just couldn’t complete the deal. He’s spent years renting, riding, and racing for his first Wally and the WAR Suzuki presents his best chance—even if it’s more than twice the cost he’s used to paying.

Now all this would come as a big surprise to Gary Stoffer and Greg Underdahl, who own and tune the bike that Pollacheck ran very well on last year. But “very well” is not six wins, which is how many times LE wheeled into the winners circle. With WAR, Pollacheck would have the best non-Harley seat in the house—and no more excuses.

My number two is not really my number two, but since he’s everybody else’s number one I’ll put him up here. John Hall’s phone has been ringing off the hook since word leaked out that LE was out and someone else was in. “Everybody’s sure it’s me,” said Hall, who sincerely denied the move.

And I believe him—he’s simply not ambitious enough to spend White Alligator kind of money (rumored to be bargained down to $8500 per race for a full season). Hall’s satisfied with two Wallys and is too busy with his business to run a whole season—especially with that kind of price tag. “I’m not exactly satisfied with two Wallys,” corrected Hall. “But I’m not committed enough to a championship to spend that kind of money. Besides, I’m still waiting for my phone to ring with the offer to ride that third Harley….”

Number three is Steve Johnson. Similar to road racer Larry Pegram, Johnson is as famous for funding his own racing program year after year as he is for his racing. But you gotta figure it costs him gobs of money and personal energy to field his team, fuel up the rig and be absolutely responsible for everything.

At 57, Johnson may be winding his career down. Why not sell your stuff, ease your burden and rent a bike and team that are capable of delivering you a truck full of Wallys to ride off into the sunset with?

Like Tonglet, Sampey is a South Louisianan who’s known the Savoie family forever. And Angelle loves to win.

Let’s put Joey Gladstone sixth. Sure, he’s announced he’ll be riding the ex-Joey Desantis Suzuki for Stoffer/Underdahl, but don’t think for 6.7 seconds that Gladstone wouldn’t jump on the sharpest tool in the box if the sponsorship were available to fund it. But no-distribution-in-the-US Yellow Corn apparel is not that kind of sponsor.

Chip Ellis is seventh. Just pure speculation—maybe Junior Pippin left Ellis a nest egg in his will and Chip knows best how to spend it.

How about Mark Paquette eighth. With Smith parking his, the Victory talent pool is draining, so why not regroup, rent, and learn? I don’t really think this will happen, because Paquette is building a new Funnybike to travel the PDRA circuit along with his daughter and her Junior Dragster.

Melissa Surber is ninth. She’s been mentioned as a Tonglet replacement, but she and dad James struggled to keep up with costs when Pippin curtailed the special deal he’d been giving them on motors. So money is an issue. And although she’s the right size, I’m not sure she’s had enough good laps to make Kulungian and Savoie comfortable to have her on their bike just yet.

Tenth is Freddie Camarena. Freddie’s another rider/owner, but he hasn’t shown Johnson’s tenacity in funding year after year of full seasons. But occasionally money comes his way and he gets out there and races. Maybe it’s one of those times, and maybe he’s serious about seeing what he can do on the best equipment.

I was gonna stop at ten but let’s throw in one more—Jeremy Teasley. I figure I just have to list JT, but I think he’s long figured out that he’s better off forging his own path in the all-motorcycle sanction world than going PSM racing. Unless someone else were paying…maybe Roger Starrette’s caught the PSM bug? Nah, Roger’s lovin’ him some Grudge racing, Jeremy’s got a new baby to monitor, and it just doesn’t make sense….still, wouldn’t it be great?

And then there’s everybody else—even me! Who’s to say I haven’t been eating salads without dressing all winter, dug up the Mason jars, and am pursuing my PSM dream?

We’ll know soon enough. Gainesville’s just around the corner and testing will surely leak out before that. Or maybe there will be a press release. Hell, maybe Eatmyink will get hired to write it! I obviously need something to do with my time other than cruising White Castle drive-throughs, looking at my phone, and writing speculative articles…. 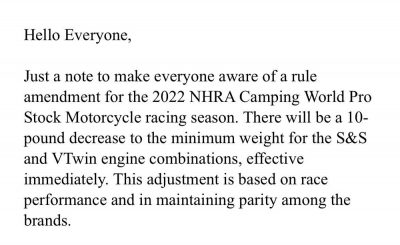