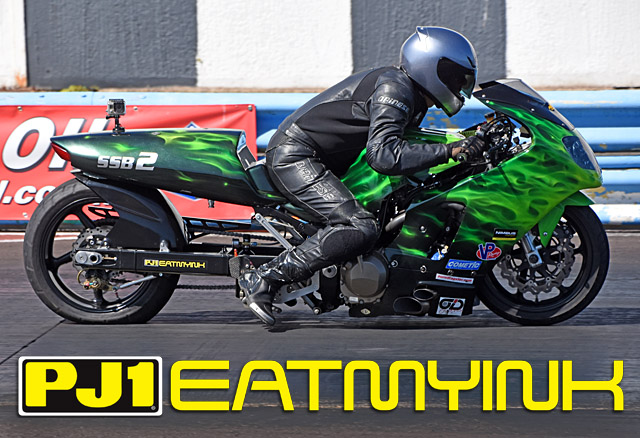 The 2017 Open Sports Nationals at Shakespeare County Raceway will go into the history books as one of the very best. Three days of glorious California weather with temperatures in the 70s, and no oildowns on the track during the three days. There was one oildown—an 8.50 bike rider lost fluid coming out the burnout box.

Six(!) qualifying sessions were scheduled over the two days of qualifying for round 5 of the ACU Championships. But with a few hours left, an extra session(!) was run and some riders were glad to get another shot of qualifying.

Phil Crossley borrowed a rear tyre off Stuart Crane in an attempt to cure his handling problem and ran an 8.045. Dave Peters had repaired his gearbox after the Bulldog Bash, where first and second gears were damaged, only to find out during qualifying that third gear was slightly damaged and ran a best of 8.472.

Davies had a bye to the final. Crossley ran 7.682 against Peters, who broke at mid-track.

Crossley had a problem coming into stage for the final and shut the motor off. Davies soloed to the winner’s circle and extended his points lead.

It was very competitive during qualifying, which led to six bikes running in the sevens out of the nine-bike field. Sean Mills was the number one qualifier with a 7.814-177.45.

Dave Batcheler recorded his first seven at this track two weeks earlier and ran a personal best at this event of 7.960. Earlier he ran a p/b speed of 161.95.

Scott Collier had both Stephen French and Baz Rathbone crewing for him. They had just returned from a very successful Bonneville trip, where they set a new speed record. As for this event, Collier had numerous issues and in the very last session ran 7.994-135.77 for number six spot.

Mills broke in the semi-final, leaving Winyard a bye run. Collier beat Osman in the other semi.

Having reached his first ACU Championship final, Collier had a foot peg break as he was coming into stage. Winyard had a solo run and move into second place in the points.

It was an all-Kawasaki final and Balchin led from start to finish 7.731 to 8.080. The win moves Balchin to second in the points.

It was Chrichlow who won the event when Andy Haley broke out in the final with an 8.464.

The final was between Sawatzki and number five qualifier Stacey Reed with the winlight going to Sawatzki 9.534 to Reed’s 9.570.

Pratt went on to win the event, beating Peter Austin in the final.

Hensher was out the show with a transmission problem. Jedd Guy damaged his motor and was out of the show. Also out was Mat Cooper, with crankshaft pulley issue, and Kenny Murray.

Steve Wells ran a personal best of 8.216 in the first round of eliminations. In the semi-finals, Ronnie Mercer had a bye to his first final. The other semi was a cracker, with Millar taking a holeshot win over Griffin 7.814 to a Griffin’s quicker but losing 7.663.

The final was Millar start to finish, and a step closer to the championship.