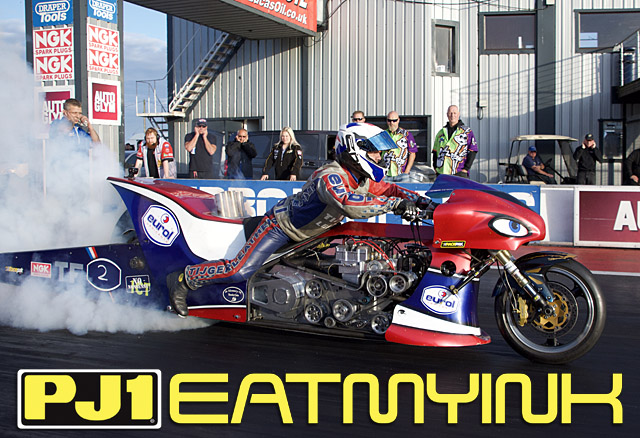 report and photos by Steven Moxley

The final round of the 2017 ACU Championships was held at the National Finals. It has been a few years since it was last held at this event, and there were many personal bests set over the weekend.

Neil Midgley recorded the quickest ET for his Cannon Engineering bike and a career personal best of 6.477, clicking off early with a speed of 177.85. Midgley damaged a rear piston during qualifying.

Al Smith made his competition debut on Phil Baimbridge’s new Top Fuel Bike. There were a few minor teething problems. A belt broke at 250 feet after a great launch and then came a couple of fluid leaks during the other sessions.

Van Den Berg had a bye to the final. In the other semifinal, Woollatt led from start to finish and set a new ET record of 6.200 against Midgley, who ran 6.692 and his fastest speed so far of 179.25.

Woollatt won the event and the championship when Van Den Berg was a no show.

Davies had a bye run and was crowned 2017 ACU Funny Bike champion. Peters broke in the burnout box, leaving Le Gros to solo into the next round. Hagenstein broke off the start line against Joswig. Crossley had a bye run to the semis.

Le Gros was a no-show in the first semi-final against Davies. In the other semi, Crossley beat Joswig 7.723 to 7.956.

Thurnty Martina had a problem in the shutdown area on test day and parted company from the bike in the field and broke his collarbone. Scott Collier didn’t make it down the track due to an oil leak when they fired the bike up in the morning.

Smiley had a bye run to the final and retained his ACU Comp Bike championship when Mills broke. In the other semi-final, Hope ran yet another p/b 7.504 to beat Walker, who also ran a p/b 7.846.

In fifth spot was Pete Field, who suffered transmission problems with fourth gear in testing. During qualifying he hurt his motor after running 7.315-160.25 and was out of the show.

Richard Hann led a small group in the 7.4 second zone with a 7.411, ahead of Steve Venables (7.431) who broke a rod. Steve fitted daughter Jemma Venable’s spare motor for eliminations.

Daniel Lencses had a new front wheel following the damage at the European Finals meeting, and after a checkout pass qualified with a 7.464-193.88. Alex Hope ran a 7.484.

Dave Smith ran his best time (7.539) since returning to Super Street Bike. Graham Dance had a switch fail, which controls his burnout and race set-up, and ran 7.552-195.45 to get in the show.

Peter Granica broke a camshaft during testing after running 7.6 seconds.

Round two and Reed had the bye run to the semifinals. Venables redlit against Balchin, as did Lencses against Stubbins. Hann beat a troubled Thomas 7.456 to 13.226.

Stubbins ran low ET of the meeting 7.053 to beat Reed in the semis. In the other semifinal, Balchin won on a holeshot 7.643 against a quicker but loosing 7.447 by Hann.

After damaging his engine at the European Finals, former European FIM and ACU Super Street Bike champion Garry Bowe rode Alex Hope’s 9.50 bike and qualified number one with a 9.517, ahead of Lewis Burgess’ 9.525. Bowe went on to win the event when Burgess broke out in the final. Richard Sawatzki retained his title.

Kevin Slyfield was out of the show with a broken chassis, as was Chris Issac—who damaged a valve in the cylinder head and the rear axle. Mick Payne broke a con-rod.

In round one of eliminations, Wayne Nicholson ran personal best figures of 6.395-221.36 to knock out Harteveld.

Congratulations to the following champions: