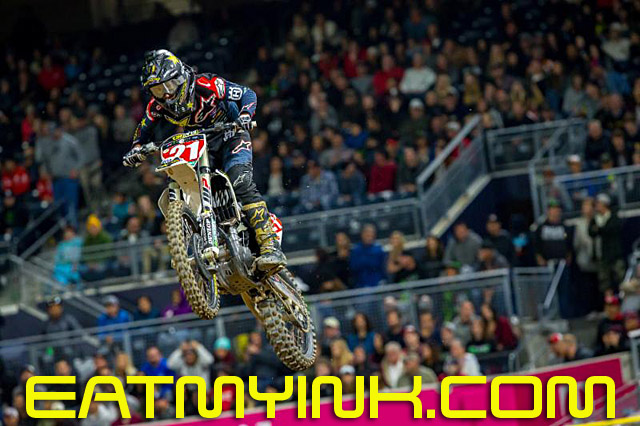 photos and video courtesy of Supercross, story by Supercross and Tim Hailey.

Tomac never recovered from the crash and pulled off course in last place.

Roczen moved to the front but came out on the shortest end of a personal duel with Webb. The two collided exiting the turn before the whoops. Roczen chased Webb down along the inside and as he cut the corner tight, basically came off the bike and speared Webb. Worse, Roczen’s right hand caught between Webb’s spokes and swingarm, breaking the hand on Ken’s “good” arm and ripping the sleeve from his jersey.

Meanwhile, Seely floundered and Anderson rallied to pass and win. “I’ve just been putting myself in good positions, and I’ve just been fighting,” Anderson said on the podium. “I really had to keep my head down but, man, I’m excited to keep getting these wins and podiums, and I’m just grateful for the opportunities.”

“It was tough, I’m not gonna lie,” Hill said on the podium. “But this track lends itself to me because it was technical … I’m beyond psyched, and to put the bike on the top step and kind of shut up all the haters in a way, I feel really good about it, and I feel back to my true form.”

Adam Cianciarulo stood on the podium for the third time this season as he earned his best result during Round 6 at Petco Park. His runner-up finish moved Cianciarulo within one point of third place in the championship standings. Joey Savatgy also had a good showing in San Diego and sits just five points out of the Western Regional 250SX championship lead following a fourth-place finish.

The day started off positive as Cianciarulo logged the second-fastest lap time in timed practice. When the night show started, Cianciarulo picked up his second heat race win, just ahead of his teammate. With that confidence going into the main event, Cianciarulo charged forward after a fourth-place start and quickly made it to second by the end of the first lap. He challenged Savatgy for the lead and took over on the second lap. In the final stages of the race, Cianciarulo went back and forth for the lead and eventually settled into second where he would finish.

“I am really happy to grab my best finish before the break,” said Cianciarulo. “I rode a little tight for awhile and let Justin (Hill) slip away from me. It’s going to be interesting coming back to an east/west shootout mid-season, but it’s going to be good to get a little break now. I am going to enjoy being at home for a while.”

The day was an uphill battle for Savatgy, who was hit by his bike after going down in practice. Even with a sore wrist, he grabbed a second-place finish in his heat race and was determined to close the gap on the championship leader. For the second time this season, Savatgy grabbed the holeshot and led the first lap. A few riders were able to get by Savatgy, but he stayed close in fourth where he finished, despite not being 100 percent.

“Today was a rough one after going down in practice,” said Savatgy. “With this being the last race for a while, we had to tough it out and go after some points before the break. I wish I could have made it to the podium to help cut into the points even more, but all things considered it was an okay night.”

The 2018 Monster Energy Supercross season continues next Saturday, February 17, with Round 7 from Arlington. Watch the action live on FS1 at 7 p.m. CT / 8 p.m. ET.