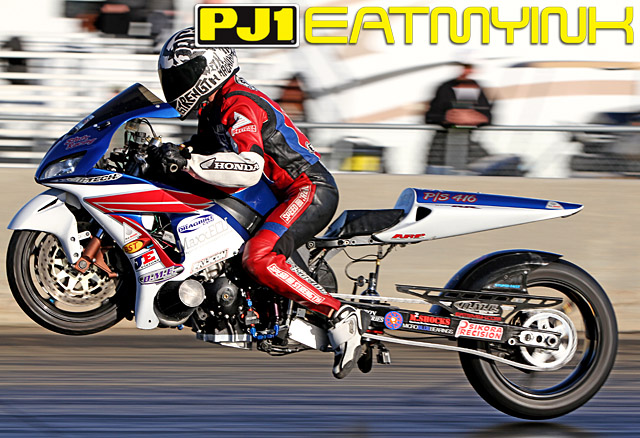 After qualifying on the bump and being knocked out of the DME Shootout early, Frankie Stotz pushed his little Honda 1000 to a 6.70 at 202 in round 1 of Man Cup APE Pro Street qualifying—phenomenal numbers for the one-off liter bike and good enough to keep APE Pro Street number one qualifier though the next two sessions. 38 bikes attempted to qualify for the 32-bike field.

British ace Steve Venables had DME change his clutch and gearing, initiating a struggle to find the tune-up that resulted in a 6.981 at 204.73, followed by a 209.10 lap. He qualified 21st.

Lund’s U.S. raceday ended early against DME’s Jason Dunigan 6.998 to 7.111 in round one of eliminations. Still, Mogens was pleased he’d made the investment to make the trip despite some pre-race bitterness by a very small group of PST racers regarding the Europeans racing with their Super Street Bike rules.

“We were welcomed by everyone we met, and everyone said that they were happy that we made it,” said Lund. “I would like to thank everyone for making us feel welcome. A lot came over and told me that the design of the bike reminded them of Dave Schultz´s Pro Stocker, I was glad that they liked it. That design was made by Greg Russell about five years ago.

“This has been a dream come true for me. I come from a country that does not have a dragstrip, so have to go to Sweden to practice. To start out like that was way better than I had hoped for.

“For us, coming from the tracks in Europe, this was like ‘Wow!’ I have never been on a track that I had to only touch with the side of my boots or they would stick to the track.

“It took a little to get use to the way the U.S. riders stage. In Europe, it´s almost like a race itself to get to the light, maybe because we don´t use auto start.

“One of the things that wondered me was that there were no officials in the shutdown area—no one that you could tell if you have had engine problems, oilspils, or water for that matter at the end of the track. Or what if someone caught fire, like Stuart Crane at the Euro Finals, a 200 mph fireball and the rescue crew still at mid track—just an observation.

“I would like to thank Jay (Regan) and Dave (Schnitz) for letting us come over to race with the Pro Street guys in the U.S, I hope we can make it a tradition, and also maybe at some point the other way around. Thank you all.”

Venables ran his quickest time of the meeting 6.949 to beat Ryan Hable 7.120 and advance.

Sweden’s Bjorn Fristrom was last place qualifier oh his sleek Bud Yoder-built ‘Busa. That earned him the honor of facing Stotz in round 1. Frankie ran a 6.759 to Fristrom’s 7.310, sending Bjorn to Pro Open where he fared well.

Round three and Paquette ran a personal best of 6.678 to beat Justin Shakir, then trailered Mark Gargiuio 6.704 to 7.409 in the first semifinal. In the other semi Williford ran 6.676 against Jeremy Teasley’s 7.403.

The final was decided at about 100 feet when Paquette pulled a wheelie and Williford took his second win of the weekend, carrying over his DME Pro Street Shoutout winning momentum.