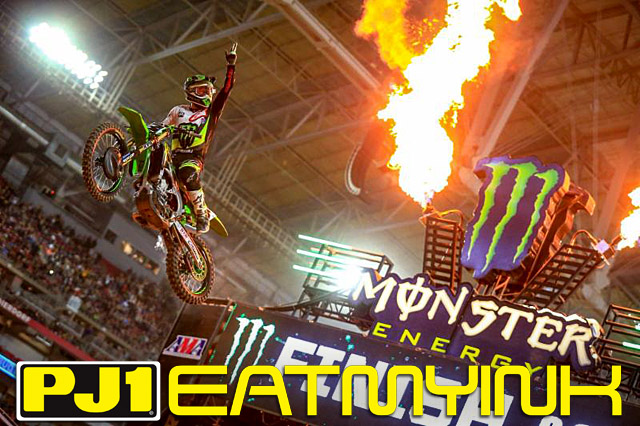 story and photos courtesy of Supercross Media.
Monster Energy Supercross, an FIM World Championship, hosted Round 4 of the 2018 season inside the University of Phoenix Stadium in front of 54,623 fans.
Monster Energy Kawasaki’s Eli Tomac scored his second consecutive overall event win in Glendale. In the 450SX Class Main Event, Tomac captured the lead from the start and ran away with the win, leading all 23 laps ahead of Monster Energy/Knich/Yamaha Factory Racing’s Justin Barcia. “That was a big, big push,” Tomac said on the podium. “The pressure behind me was there the entire time; you couldn’t miss a line. I nailed everything … That was just awesome. We put in a big effort all day and to go out on top was the best.”
Barcia earned his third podium with a second-place finish from the start, ahead of the battle for third. By the checkered flag, Team Honda HRC’s Ken Roczen captured third and his second podium of the season ahead of Rockstar Energy Husqvarna Factory Racing’s Jason Anderson. Team Red Bull KTM Factory Racing’s Marvin Musquin found a much-needed top five finish as he recovers from injury.
In the 250SX Class Main Event, Monster Energy/Pro Circuit/Kawasaki’s Joey Savatgy and the Troy Lee Designs/Red Bull/KTM ride of Shane McElrath, who both came into the race with red number plates and tied in points, ran wheel-to-wheel ahead of the Monster Energy/Yamalube/Star/Yamaha Aaron Plessinger after the start. McElrath found an inside line on Savatgy and caught the lead until Plessinger found a way around both of them for the win and regained the points lead.
Monster Energy Pro Circuit Kawasaki’s Adam Cianciarulo returned to the podium at Phoenix, while teammate Joey Savatgy slipped out of a podium spot, finishing fourth for the night. Savatgy sits third in the championship standings while Cianciarulo is fourth overall.

Savatgy entered the night show with the top qualifying time during the afternoon sessions. He was showcasing that speed, but a mistake in the hard-packed whoops forced Savatgy to qualify through the LCQ – which he won. Savatgy was able to get an awesome jump from the outside and earn the holeshot. He stayed with the front-runners for several laps and was keeping pace in third, but a mistake in the final few laps pushed him back to fourth where he finished.

“I was really trying to play it smart and ride my own race,” said Savatgy. “It helped me last week, but the slick track bit me a few times. I’m thankful to have been able to get up quickly and get fourth, but it’s not where I want to be. I know anything can happen in this series so we’ll keep working and bring our best to Oakland next weekend.”

Starting the day qualifying second, Cianciarulo continued to showcase his talent and speed on the tough West Coast soil. He qualified third and after starting the main event in sixth, put his head down and started picking off riders. By the sixth lap he was into fourth behind his teammate and was able to capitalize on a mistake from Savatgy to move into third, where he maintained until the checkered flag.

“The start is definitely important with the array of talent that is in the class right now and I didn’t get one tonight,” said Cianciarulo. “With everyone being so ‘on’ it’s harder and harder to come through the pack. It really ended up being a mistake that helped push me forward, but I know that I have what it takes to win. I just need to put myself in that position.”