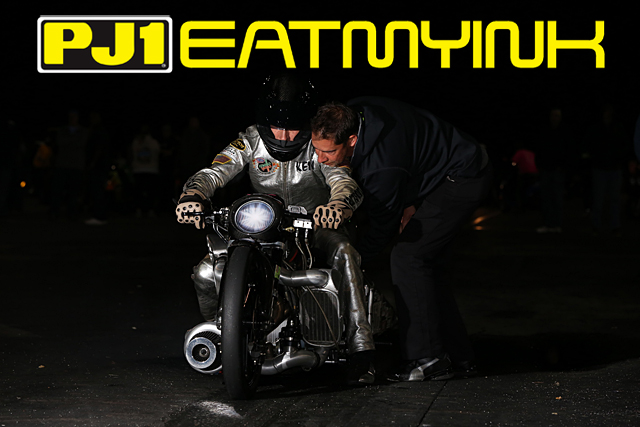 Niki Zak was the Pro Open number one qualifier with a 6.432 at 205.22 on a Dan “The Man” Wagner tuned nitrous Pro Mod, but lost in round one of eliminations when her motor died at the line and Quicktime Racing’s Rudy Sanzottera—in the field after losing in Pro Street—plunged ahead for the win.

A similar thing happened to champion Mark Rendeluk against Rudy’s teammate Brad Christian….that voodoo that those Quicktime bikes do.

Denmark’s Mogens Lund entered Pro Open to test a new clutch after losing in E1 of Pro Street and lost to Chris Cutsinger.

Sweden’s Bjorn Fristrom also made the move to Pro Open after an early PST ouster and advanced past Jean Gosselin’s Pro Mod in round 1 when Gosselin had a switch on the throttle go bad. “I’m so frustrated,” said the amiable Québécois. “I’m back in April with a better switch!”

Pro Open starting line weirdness continued when Fristrom met Tommy Saxon and his nitrous Pro Mod in round 2. The bike over-revved and jumped,” said Bjorn, who deepstaged as a result. “I quickly pulled back and the light went. I stood there. No redlight. I left and passed the other bike. Won (or so he thought). The starter told management I staged with my rear tire. I didn’t of course. Strange run anyway.”

Fristrom, though, was thrilled with his U.S. racing expedition, as were all the Europeans racers that made the jaunt. “The trip was perfect,” said Bjorn. “We messed around with LOT of stuff, trying things that are allowed here but not in U.S. We tried everything and now the bike works. Now its full of the latest fancy stuff that I don’t want my competitors to know about. “I would have liked ten more test runs. We got the bike one day late. Now I’m ready for test ‘n tune and. it’s 50 inches of snow here where I live, so the bike is on it’s way to Rikard Gustafsson’s for freshening up the engine.”

Saxon went on to win the event, making consistency count and beating Keith Browne’s Turbo Harley in the final.