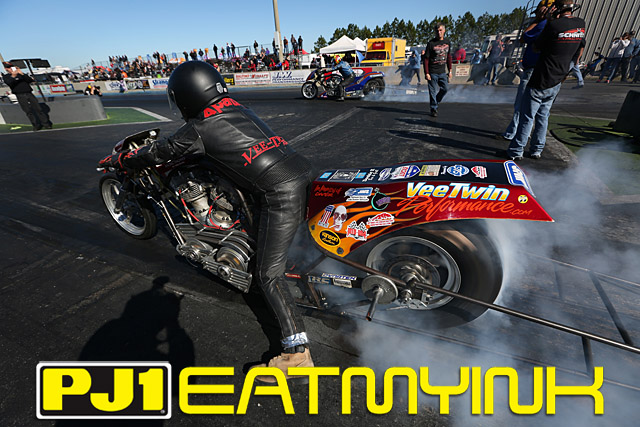 Kirby “Fast Boy from Indiana” Apathy has not had a good season coming into this event. He has broken two crankshafts this year and had a different engine for this event, hoping for some better luck. “After breaking a couple crank pins this year, we really had no testing before the last race but had Larry Janczak add some extra weight and make the new flywheels a lot stronger,” said Apathy.

Apathy got his better luck, running a personal best of 7.048 at 178.35 to lead qualifying. “With the track conditions being very good, we set the clutch very aggressive and blew the tire off on just about every pass of the weekend (testing and qualifying). On the 7.04 pass in the last round, we spun pretty bad and had to fight the bike all the way down the track but the motor was running very strong.”

The little nitro V-twin Pro Fuel bikes have been working towards a 6 second pass for the last few years, and Apathy shocked the world in the semifinal with the first ever 6-second Pro Fuel pass. And like Top Fueler Rikard Gustafsson, Apathy went straight deep with a 6.85 at 183.00 that dropped jaws all around.

“At the last Man Cup race, we figured someone was going to run in the 6’s with (builder/tuner) Johnny Vickers and (rider) Mike Ray leaving the door open with their 7.01,” said Apathy. “We figured we better throw everything we had at it. On the 6.85 pass, the bike was very easy to ride—a perfect pass. But as the blown-up picture that Tom McCarthy sent me showed, once again we were on the verge of either shaking the tire or flat our blowing it off again.”

Eatmyink Was ON IT! NHRA to race at Indy in July