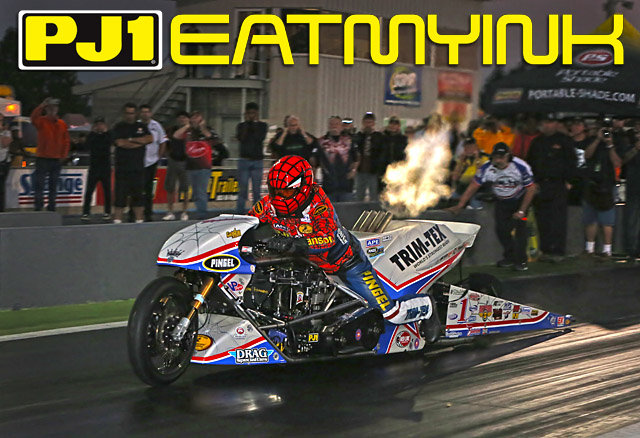 The fireworks began in earnest on Friday afternoon. Track guru Wade Rich had SGMP on point for eliminations of the DME Pro Street Shootout, which began on Thursday.

Long thought to be the next 5-second Top Fuel Motorcycle pilot, Sweden’s reigning European FIM Top Fuel Bike Champion Rikard Gustafsson had repeatedly come up short in Europe. But not on this Friday test pass, as Rikard went balls-deep into the 5s with a 5.89 at 244 miles per hour. Gustafsson eventually qualified with a 5.974 at 240.34 in number four spot.

Watch this video of Gustafsson’s first 5 and interview with the serious Swede:

That evening saw a qualifying session like no other, with Larry “Spiderman” McBride leading a flurry of 5-second Pingel Top Fuel passes with a U.S. record of 5.72 at 248 mph that led the field after the first qualifying session on Friday. But it came at the expense of a piston, so another motor was fitted and ready for Saturday’s qualifying sessions.

McBride his brother/tuner/builder Steve turned the wick up on Saturday and ran the world’s first 5.6second motorcycle pass (5.677 at 250.74). On that run the parachute failed to open but McBride managed to stop in time to make the turn off to the return road. In the final session, McBride recorded the world’s fastest speed of 258.27.

David Vantine has struggled with a clutch issue this year (plates) and ran 5.887 at a personal best speed of 246.44 mph, and qualified second overall with a 5.843.

This was an emotional meeting for Ian King, as it would be his last race as the owner of his Top Fuel bike. The bike has been sold to Filippos Papafilippou of Greece, and this season King has raced in the USA. It has been a tough season, and Ian ran an encouraging third place 5.918 at 205.35 on Friday at the expense of a crankshaft bearing. Marius van der Zijden and team finished the rebuild at 2:00 am Saturday morning.

Championship contender Sam Wills missed the first qualifying session due to the steering not feeling correct. An incident with the team’s trailer on the way to the track had left the bike shaken and stirred, and Wills and partner Mike Dryden were taking no chances. Sam ran 5.991 at 229.63 on Saturday to qualify fifth.

At this event last year, Dennis Bradley debuted his new Fuel bike with Mitch Brown in the seat. It has been a big learning curve for the team and they have had some clutch and transmission issues. On Friday, Brown ran a best-to-date of 6.248-203.71.He went faster the next day with a speed of 224.36 and qualified sixth.

Chris Hand damaged a motor on Saturday (severely cracked cases) and fitted another motor for eliminations. Chris qualified seventh with a 6.398-173.70.

Round one of eliminations on a sunny, cooler, and windy day meant it was a case of who had the right combination for the changed conditions.

Gustafsson faced Wills, who was just over 20 points behind McBride coming into this event. Last year—while also fighting for the championship—Wills suffered traction problems (smoking the tyre). History repeated itself again this year when Wills went up in smoke at 30 feet. Gustafsson ran a p/b of 5.874 at 242.76 in the other lane to advance.

King smoked his tyre at 30 feet and chased after Brown, but couldn’t catch him. McBride had a bye run and he too smoked his tyre, right off the start line, but still became the 2017 Man Cup Top Fuel champion.

Hand started his burnout in the semifinal and a flash of something appeared at the top of the motor. Hand shut the motor down and was a bit mystified—even later back at the pits—about what had happened. Back at the shop in Alabama he found a crack in the cylinder head. “In number two, between the plug port and intake seat,” said Hand. “Would have been very tacky if happened on the run…” Brown benefitted with a solo pass to the final.

In the other semi, McBride faced Gustafsson, which turned out to be the best race of the day. Larry broke out the gate first, taking the winlight with a 5.746 at 245 against Rikard’s personal best of 5.852 at 247.97 to adopt the crown as Europe’s fastest Top Fuel Bike.

Larry and Steve McBride turned the wick up yet again for the final and ran a jaw dropping 5.611 at 249—nearly a 5.50 pass that hazed the tire at 1000 feet but kept the front hoisted high the whole quarter mile—to cap off a memorable five days of racing. In the other lane, Brown finished off his and Bradley’s best weekend of Top Fuel racing with a 6.85-191.

Watch this video of McBride’s records and interviews with Brown and the Brothers McBride:

Responses to the McBrides’ achievement were varied. Wills for one was exasperated. He’d expected to sell his bike to Pro Open number one qualifier Niki Zak, but the deal fell through at the last minute. “I want OUT!” Wills said emphatically, listing his expenses over the years since his comeback and citing the things he’s been unable to do while tied up with his racing program. Coming up short for the championship two years in a row and watching his rival move the goalposts that much further away had the Oklahoma Top Fuel veteran at his wits’ end.

Back in his trailer, the even more veteran Chris Hand was circumspect about all he’d seen in his many years of battling with the man he calls The Spidermonkey. “If you come into this to compete and try to better yourself, you’ll be OK. But if you expect to go toe-to-toe and see eye-to-eye with the McBrides, then you’ve got another thing coming.”

With King’s “retirement” (Ian plans on running the team while Fast Filippos rides the bike at European race events, and Ian rides at “celebrity” events like Goodwood while also working on a Funny Car license), the once again growing Top Fuel class in the U.S. is—once again—one step forward, two steps back.