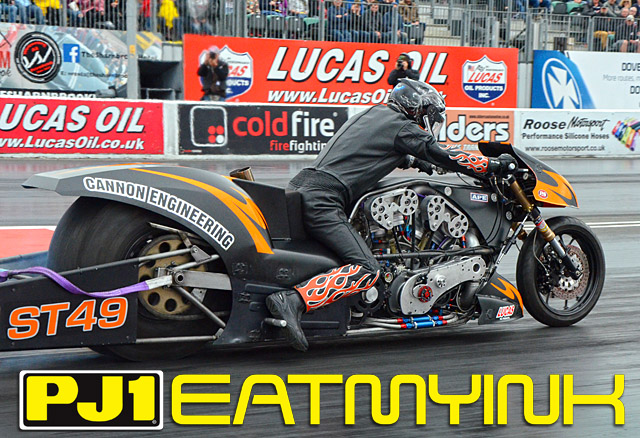 story and photos by Steven Moxley.

The final round of the 2017 European FIM Championships at Santa Pod was severely disrupted by rain, which at the end of the event decided some of the classes and where the championships would go.

Qualifying for Top Fuel Bike and SuperTwins saw only one session out of the planned four sessions over two days. Pro Stock Bike and Super Street Bike completed two sessions.

Professional classes reached the final round stage of eliminations when rain fell and the meeting was called. Two bike classes did run their final.

Reigning ACU Top Fuel Bike Champion Steve Woollatt has done some mods to his clutch for strength and was the number one TF qualifier with a 6.344 at 210.93 mph

This was Filippos Papafilippou’s last ride on his PXM bike and he ran 6.704 at 209.04. At Hockenheim, Papafilippou ran a p/b 212mph to become the fastest nitrous PXM bike over the ¼ mile. 2018 will see him on Ian King’s Top Fuel Bike.

Hockenheim runner-up Stuart Crane had traction problem and qualified with 7.174 at 171.12.

Allan Davies fitted new pistons after winning the Open Sports Nationals at Shakespeare County. Davies ran 7.280-177.10 this weekend, but the bike hasn’t run a six-second pass. So didn’t qualify for the event.

Hockenheim winner and championship points leader Rikard Gustafsson broke a brand new chain on his qualifying run and that meant he was not in the show.

Eric Richard was on a good pass, but when he reached the ¾ track the crosswind drifted him towards the wall and Richard parted company from the bike. Richard was OK and there was some small amount of damage to the bike.

Another rider who didn’t qualify was Lorcan Parnell, who had a gear crack after his burnout and the oil pump seized as he came into stage on the startline.

In the first semifinal, Woollatt came to the start line and the clutch dragged the bike and Woollatt redlit. Leeks ran 7.552 at 175.76 to reach his first FIM final in his first eliminator.

In the other semi, Papafilippou had problems coming off the start line and stopped at 80 feet against Crane, who stormed down the track. Then at the 1000 foot a camshaft broke and a huge fireball erupted. Crane climbed onto the frame to protect his legs with the bike speeding at 170 plus mph into the shutdown area, and he managed to stop the bike safely. Stuart was checked over and had a minor injury. Later he was told he ran a personal best ET of 6.818.

So an all Warpspeed final. Rain fell and Crane couldn’t make the call so Leeks went to the start line and broke the beam to claim the event win.

Neil Midgley ran a jaw-dropping 6.761 at 164.25 to claim number one qualifier in his first FIM event on Chris “Cannon” Hannam’s bike.

First semi had the two contenders for the title. Sixta had to beat De Haas and win the final to take the championship. Roman gated Martijn and went on to take the winlight 6.929 to 7.105.

In the other semi, could Midgley reach his first final? The answer was no. He had a traction issue at 200 feet, while Salesse was very close to the centreline and took the winlight to reach his first FIM final.

Rain fell and with the meeting called, De Haas picked up another title.

Alex Hope was the only rider who could stop Fredlund, but he had an electrical issue, which the team sorted. They were working on the fuel system and ran a best of 7.376-178.50.

Len Paget damaged his crankshaft at Hockenheim and had his spare motor in the frame. Paget was the only rider to make a pass on Friday night. On Saturday he ran 7.760-166.67 but there was a lot of smoke coming from the exhaust.

Abraham got close to the centreline to open eliminations and clicked off the motor at mid-track against Bishop, who ran 7.465. Hope beat Newbury 7.410 to 7.488. Pinet was a no show, so first alternate Paget was against Karlsson, who ran low ET of 7.027 to reach the semifinals. Fredlund’s 7.113 eased past Maurice, who had his best run of the weekend at 7.593.

Rain fell and Fredlund had a bye in the final, so he went to race officials and asked if he could break the beam and claim the event win while the rain was still falling. They said yes.

Franklyn Borg had the engine and transmission of his Simon Giordmaina-owned turbo Suzuki Hayabusa rebuilt by Dave Smith, and on the Saturday of qualifying ran a jaw dropping 6.916—the quickest run outside the USA.

Reigning champion Garry Bowe blew his engine at mid-track (leaving two big holes) after running 7.398 in the first session and was out of the competition. Both Mathias Bohlin (7.434) and Robert Nilsson (7.438) had traction problems.

Championship leader Rick Stubbins was off the pace with a 7.647, and Jemma Venables ran 7.663.

Clement Walliet had wheelie problems off the start line and ran 7.903. Mark Hope was just outside the seven second range with 8.008. Dave Thomas had a damaged clutch and ran a best of 8.234.

On the bump spot was Rudi Zorzi with a 9.130 due to low boost. He didn’t have a spare turbocharger. Outside the show was Erich Gruber‘s 9.698.

Round one and Borg had a bye and tried to set a record, but pulled a wheelie at 300 feet and rank 10.296. Lencses also pulled a big wheelie at same area of the track against Mead and stopped before the finishline with a damaged front wheel. Steve Venables had a problem against Walliet, who again wheelied at the 20 feet, and Venables took the winlight 8.058 to 8.387. Gruber came in for Bowe as first alternate and beat Jemma Venables, who redlit. Thomas crossed lanes against Lund, and Balchin’s 7.257 beat Hope’s 7.724 despite Mark’s p/b speed of 189.84. Nilsson went into round two after beating Dance, and Stubbins found his form again and beat Bohlin 7.211 to 7.712.

Round two and Borg lost to Mead when he had a problem at 150 feet. It took three attempts to run Gruber vs Steve Venables due to the slight shower. Eventually it was Gruber who went to the semifinals when Venables redlit. Lund won a close race against Nilsson 7.157 to 7.186. Stubbins won on a holeshot against Balchin 7.264 to 7.202 to become the 2017 European FIM Super Street Bike Cup champion.

Lund had a problem at ¾ track against Stubbins in the first semifinal, then Mead beat Gruber 7.537 to 7.762 to reach his first ever final before rain stopped the event.

Top Fuel drivers were due to run a qualifying session on Friday night, but with the evening dew, they and the Pro Stock car drivers decided not to. So the Top Fuel cars only got one session on Saturday.

Makela and Micallef were the only top five drivers to go into round two and they would have met in the final. Micallef had a bye to the final and was crowned the 2017 European FIA Top Fuel champion when Stefan Gunnarsson was a no-show after damaging his motor in round one. Makela beat Micke Kagered in the other semi-final 4.075 to 4.987.

Reigning European FIA Top Methanol Champion Jonny Lagg was third with a 5.460-253.22, ahead of round five winner Sandro Bellio.

The top three qualifiers all reached in the semifinals. Lagg ran a personal best ET 5.403 to knock out Dennis Habermann’s 5.440. Timo Habermann had a bye run to the final and was crowned the 2017 European FIA Methanol Champion.

The next three places were Thomas Lindstrom’s 6.717, Robin Noren’s 6.756 and Magnus Pettersson’s 6.764. Championship points leader Bengt Ljungdahl was sixth with a 6.924.

In the first semi, Ernryd beat Simon Gustafsson 6.711 to 6.921. Ljungdahl had a bye to the final and became 2017 European FIA Pro Stock Champion.

Multi-time European FIA Pro Stock Champion Jimmy Alund has had a great season in Pro Modified and was in second place in the championship coming into this event. Alund was the only driver to run a five-second pass in qualifying with a 5.978 after two sessions.

Andy Robinson was second with a 6.076 at the expense of a damaged camshaft. 2017 European FIA Pro Mod Champion Micke Gullqvist qualified in seventh with a 6.156. Jon Webster debuted his new Ford Mustang and was on the bump spot at 7.239.

Round one and number three qualifier Bruno Bader got beat by Phil Englefield 6.204 to 6.289. In the next round, Englefield lost to Kim Kristiansen, but ran a p/b speed of 228.94.

Alund had tyre shake, eased off, and watched David Vegter take the winlight in the first semifinal. Kristiansen redlit against Gullqvist in the other semi.

Friday night Steve Ashdown launched off the start line with huge header flames down the track and ran 5.916 in front of a large, appreciative crowd.

Saturday saw the return to Funny Car racing of Gary Page. After doing his burnout Page could not get it into reverse. USA Terry Haddock had an issue with the motor and didn’t get down the track. Birgette Bremnes ran 5.666 in the Gladiator Funny Car. Kevin Kent smoked the tyre off the start line.

Ashdown managed to get down the track with a 4.994.

Both drivers had traction issues in the first semifinal. Kent’s 7.004 took the winlight against Bremnes’ 9.807. Ashdown had a bye run.

Gerd Habermann ran his Jet Bus to a new personal best of 9.588-175.06 on Sunday, but glanced the wall in the shutdown area. He stopped the vehicle safety and was ok.

There was a match race to the 1000 foot between Terry Haddock in the Showtime Funny Car vs the Nostalgia Funny Car of Tim Garlick. Haddock lit the tyres just off the start line and Garlick took the win with a 5.457-164.

Congratulations to the following champions.