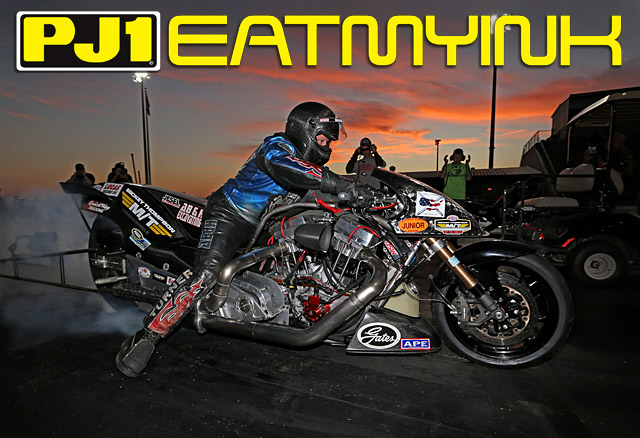 Japanese Harley-Davidson dealer Takeshi Shigematsu rode his Don “DJ” Johnson-built-and-tuned Pro-Charged nitro Harley to the quickest time by a V-Twin on U.S. soil with a stunning 6.021 at only 190 mph on the magical Friday night of qualifying. Shigematsu would likely have run the configuration’s first 5 had a handlebar not broken off on the throttle side and sent Tak into the wall on the big end!

Tii Tharpe ran a personal best of 6.178 for number two spot in the other lane. When he saw Tak at the end of the track he noticed that Shigematsu was missing his right boot. “Where’s your boot Tak?”

“I hit wall! Boot’s on track!” Bike and rider were mostly OK, but were unable to harness that lightning-in-a-bottle moment again the rest of the weekend.

Next was Bad Apples Racing’s Tracy Kile, who ran his first full pass on his new bike at 6.344-223.99. Kile has had a few issues and during qualifying he had the crankshaft break, which put him out of the show.

Sweden’s Anders Hornstrom is riding an ex-Jay Turner bike, and during qualifying ran personal bests of 6.53, 6.41, and qualified with a 6.391-223.95 to become Europe’s quickest normally aspirated V-Twin.

Lyle Newton had a trying time in qualifying, breaking the cases on the motor and then springing a leak from the fuel pump. But he managed to qualify with a 6.765-190.90.

Newcomer to the class David Larson was riding Mike Bahnmaier’s bike and ran a personal best of 6.772. Gregor Johansson had clutch issues over the weekend, changed the front sprocket during qualifying, and ran a best of 7.001-177.51.

Back in September, Finland’s Jaska Salakari sent a shock wave around the world when he ran 6.010 on his Nitro KTM Duke at Alastaro to become the world’s quickest V-Twin. Thursday night during testing, Salakari fired up the motor and people rushed trackside with their phones to get a photo of this unique bike. With huge header flames, Salakari ran a 6.78 check-out pass on one cylinder, due to cam timing. He qualified with a 7.035 at 139, his crew spending a lot of time rebuilding in the pits.

The Europeans faired well in round one of eliminations, with Johansson running a personal best 6.750 to knock out House. Hornstrom also made it to the next round when he beat Newton. Grimes had a chain break mid-track but won against Beland, who had problems off the start line. Salakari lost to Turner when he went up in smoke at 30 feet, and then stormed down the track running 7.560 at 190.08. Shigematsu had a problem at ¾ track and lost to Page on a holeshot—7.260 to 7.155. Larson ran a p/b 6.732 on a bye run.

The all-pushrod final capped off a war of words and stickers between the “American” style V-Twins and their Euro overhead cam cousins. Check out this action-packed “Are Pushrods for Pussies?” video with commentary by British subject Chris “Cannon” Hannam and interviews with Turner and Tharpe: